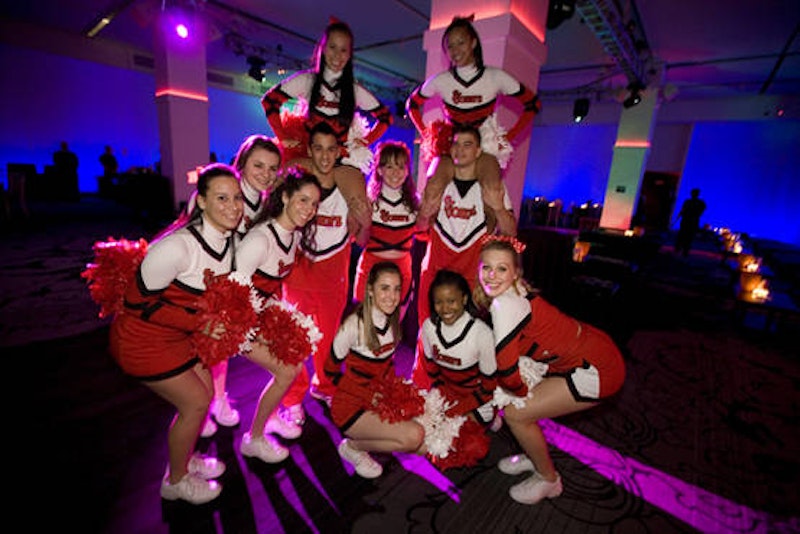 Do you remember your prom?  Does the experience still haunt you?  What if you could do it all over again.. in the now, just for one night.  To relive those nostalgic days of youth when our biggest worry was hoping that hot guy/girl will ask/accept us out.  Well this wish was granted for many on the Saturday night of May 8th when FashionIndie and Joonbug joined forces to give us PROM Class of 2010 at Espace.  For anyone that wished to relive their wonder years, get that crown, or just get laid, this was their last chance to take their glory...

Walls that tinted pink and blue, guest tables, a dance floor and slow ballads made Espace a sort of time chamber for the evening.  Complete with cheerleaders, vintage tunes, gift giveaways and a photo booth. It was high school all over again, but better... I bet your high school prom didn't have an open bar with suprise punch!  We can all remember pairing off in a stretch limo with 40 of our closest friends, heading to an upscale restaurant and arriving at prom approximately twenty minutes before they announce the king and queen (the royal couple was likely among your posse, if not, you wished they were), eager to end the night at an afterparty that one of your rich friends hosted at their house, unless you had more personal plans.

Since about 2% of the population can relate to the memory above, for everyone else who wanted to get revenge on their past there was PROM class of 2010.  Guests enjoyed live mix performances by DJ Steve Powers, DJ Josh Madden, and DJ Manero.  Celebrity appearances included Rebecca Minkoff, Paul Iacono of MTV's The Hard Times of RJ Berger, High Society's Devorah Rose, Rescue Me's Callie Thorne, and Jared Eng of Just Jared to name a few.

Contributions made to PROM Class of 2010 supported The Society of Independent Fashion Journalists (SIFJ).