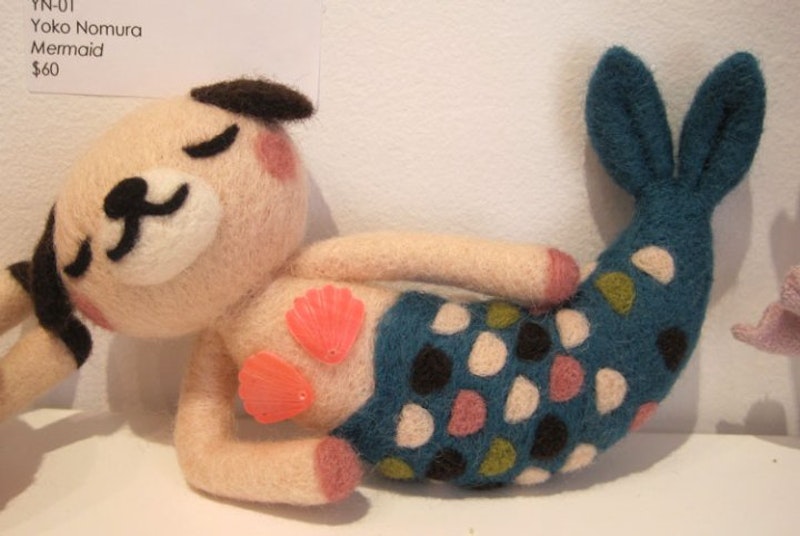 The centuries-long tradition of fiber arts has been changing, and it's never been more apparent than when looking at the collected works of 33 artists presented at Galley Hanahou's “Lost At Sea” show in NYC. What was once relegated to darning socks and stitching quilts together has become an exercise in applying all of these precise, versatile skills to ventures that extend beyond the practical and into the wildly creative. So, it’s about time that we’re seeing more and more shows dedicated to things that have been sewn together.

As someone who sewed trench coats for action figures in junior high, I have a visceral appreciation for the world of fabric. Not surprisingly, fiber arts are one small part of the male-dominated art world that is completely helmed by women. In fact, every artist showing work in the “Lost At Sea” show is female, though this was not an intentional focus according to curator and shop owner Kristen Rask, who weighed in on this demographic: “I don’t know if it’s that women have always been sewing and crafting, or a lot of men get scared by sewing. I think it’s changing—slowly. Maybe women are more innately interested in this kind of medium.”

None of this is to say that men are unwelcome in the field. In fact, it seems the opposite, according to artist Sara Lanzilotta. “A lot of women grew up sewing and learning from their mothers so we have that advantage over men of being 'pre-trained,” but it doesn't mean that sewing is meant only for women. Hey, it's working with machinery and tools—come on, men love that stuff, get on it!“

So, how does one bridge the gap between our inherent familiarities with sewn objects, like dolls and quilts, and perceive the fiber arts as actual “art”? Participating artist Katya Uvitsky expressed this frustration:

Fiber art [is] often still seen as something done in and for the home—not a museum or gallery. Hanahou is a wonderful space that is working to change that perception! Additionally, fiber art is seen as folksy and utilitarian, not a 'fine' art. In art school, it wasn't part of the foundation curriculum. There were only 'established' arts such as painting, sculpture, and photography. Even the courses in three-dimensional art (as it was called) didn't include anything soft. We worked with cardboard and wood, but never a needle and thread.”

Rask also weighs in on the cognitive dissonance the art form presents:

I had a plush show at my store, so when I send out press releases, I feel like it’s a frustrating process. When people come to visit the show, they’re like ‘Whoa! This stuff is amazing!’, but it’s hard to express that on paper. So, when you say something like ‘plush show,’ people just automatically think, ‘Oh, that’s juvenile,’ or for children, or it doesn’t have any merit as actual art until they actually walk in the door. So, I hope that that’s changing as well, but it’s definitely one of the most frustrating parts right now. I think it’s a little bit different because when people say ‘fiber art,’ then the word ‘art’ is in there.

If anything is made clear by the presentation at Hanahou, it’s that fabric and thread are incredibly versatile materials. The watery theme of Lost at Sea” was chosen by Rask because of a simple love of the mystery of the sea, and the inspiration drawn from a recent trip to Australia. Works include sculptures and nautical patterns trapped in embroidery hoops, Dixie Darling's complex tangles of sea-swept jewelry, complex doll forms, soft statues, and delicate jellyfish hanging from the ceiling, as well as bright, cartoonish creatures taking over the walls from Cotton Monster, and comics told in thread and cloth. The approach taken by different artists comes from countless angles and feelings about the sea.

Heidi Kenny, aka My Paper Crane:

"I thought about sea creatures that you might find in storybooks, or myths, things that never really existed, but we still tend to wonder over as kids. I like creating plush that appeals to kids of all ages, [which] can still be somewhat sad."

"I wanted to do something new and something very different from my artwork. I designed a set of 3 dolls that referenced Edward Gorey's Alphabet; M is for Maude who was swept out to sea. Only my version has a happy ending ... the little girl was rescued by 2 sea-friend creatures."

Stanley produced three very different works for the show, using "crochet, embroidery, and sewn plush. Each technique produces a different emotion for me. My amigurumi crochet is muted and soft—from that I created the quiet gray-blue undersea monster. Embroidery, with all its tiny stitches and detail work, is very meditative—from this I painted and stitched a reflective piece about things lost to the ocean. The 'Remember Me' piece is a sort of self-portrait I suppose; I am thinking about how I just crossed the vast ocean in a very big way. Have I become lost at sea to the home and people that I've left on the other shore? And lastly there's sewn plush, a medium that's allowed me to break out in dramatic ways and express strange and new ideas. There's something powerful and poetic when the wild ocean takes a life and I tried to capture that fight, the gasping, and the human heartbreak—while still sewing in my own slightly-twisted manner."

Jenny Hart of Sublime Stitching: "I like the idea of lost treasure and messages in bottles, which is where the idea of combining lost jewels in bottles resting on the sea floor came from for these pieces."

The small, clean, unpretentious, well-organized gallery in CWC International at Broadway & Houston in NYC presents these works in a friendly, fun environment. Works from this show, and previous shows, can be purchased online via their website. Stop on by, and expect some impressive revelations about the “woman's world” of fabric arts, because I think you'll want to start sewing by the time you get home.