Poverty Is So Photogenic

On the Guardian's recent "Detroit in Ruins" photo essay. 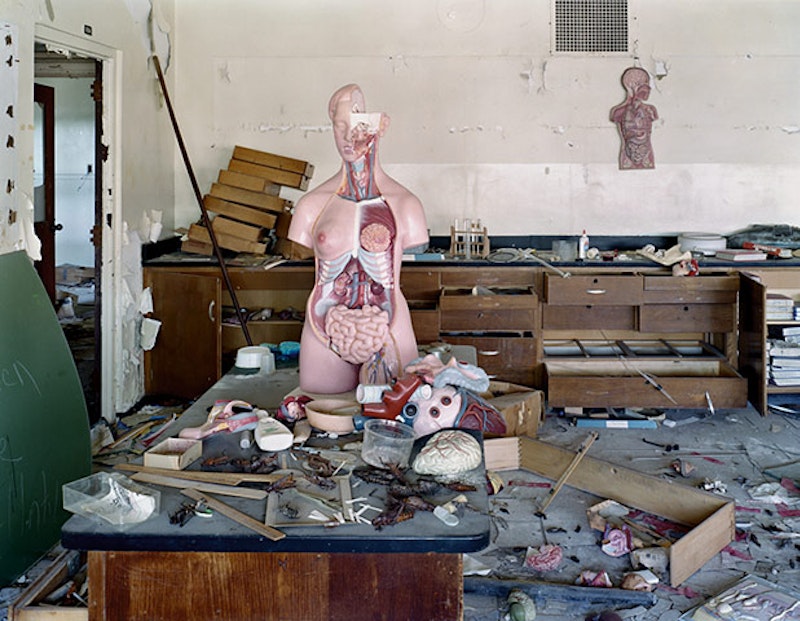 On Jan. 2, the Guardian published a photo gallery by the duo Yves Marchand and Romain Meffre. Their subject: the dilapidated wonders of Detroit.

Photographers love Motown. Once I started working as an arts writer for The Michigan Daily (at the University of Michigan), it was impossible to avoid grand, sweeping projects that sought to capture Detroit in its fading light. I’ll always have a soft spot for Michael Kenna’s survey of the larger-that-life Rouge factory, a tactful blend of Modernist language and ethnography.

Having lived in Michigan for five years, this kind of article, photo gallery and expose would usually elicit a mixed reaction: How is this helpful? Why continue to snap photos of the decrepit train station when there are many other, wonderful projects and developments coming down the pipe? It smacks of voyeurism and opportunistic journalism. Capturing a few run-down theaters and Art Deco churches can’t possibly give the viewer any sense of context. The Guardian gallery comes with only the headline, “Detroit in ruins,” and the subhead, “Yves Marchand and Romain Meffre's extraordinary photographs documenting the dramatic decline of a major American city.” That’s it. With the slimmest of contexts, the viewer is left to simply enjoy the 16 beautiful shots of the Grotesque, the Terrible Decline.

Poverty, systemic failures of government—and any sense of progress—all of this overshadowed by the photogenic qualities of a good slant of sunlight cutting through the lobby of an abandoned public library.

The tension, as I see it, comes from Photography As Art in the context of a journalistic publication. The Guardian certainly tries to cover any and all aspect of the world of politics and ideas and art, but this photo series feels a little off. It’s almost as if the photos are too beautiful, and by extension the poverty and dilapidation is beautiful. Look at our professional execution; look at the framing, the lighting, the visual play of iron tracery and peeling paint, dust and sunlight and negative space.

I don’t begrudge the photographers or the publication for executing and publishing this series. Detroit and its ruination is now as evergreen a journalistic subject as listing the best doctors in a given city. What I begrudge is the feeling that it’s now too easy, that urban downfall elicits such spectacular photographs. Decades have passed since the riots, the white flight, the auto industry failing—photo series such as this one leave an echo of, “Well, at least we can snap some good pictures of the place before it finally turns to dust.”