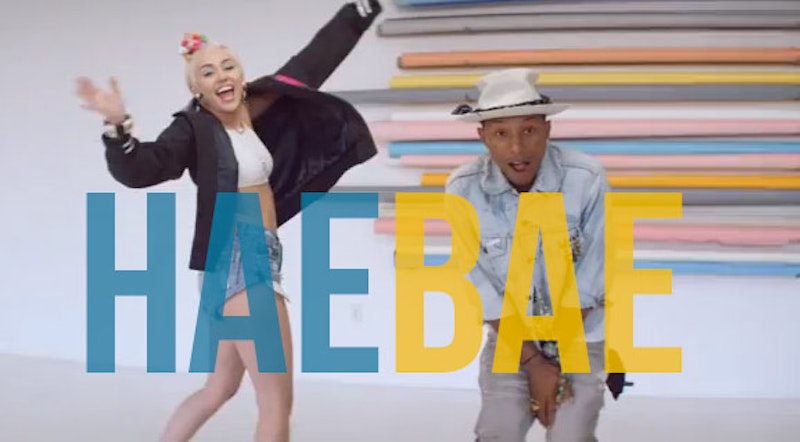 Even within the vast realm of popular affectionate diminishments, “baby” is especially condescending. My skin crawls every time I hear that word pass from one love to another, yoked to an expression of concern, endearment or impatience. Those two syllables are capable of sapping the sincerity from anything else the speaker might have to say, conjuring up strawman images as the will of leering power brokers in chains and leisure suits, snorting coke. “Baby” is therefore a sort of black hole for respect and self-respect; it’s also a reasonably passé, thank God, an anachronism to those of us who are oversensitive to common crimes of language. What would replace “baby,” circa the late 1980s or early 1990s, was both crueler and more succinct: the curt, mono-singular “babe.” Just like that, an expression of familiarly superficiality was suddenly that much more shallow, requiring less muscle memory than ever before.

Early this year, Pharrell’s staccato single “Come Get It Bae” effectively licensed douchebags and hipsters everywhere to further atomize an already loathsome expression. “Bae” cherrypicks the second “b” out of “babe” while implying that the “b” is still there, demanding even less effort from the speaker and potentially complicating the rhythmic DNA of pop songwriting for months to come.

“Bae,” somehow, comes across as an empty, airy endearment that isn’t even natural; it doesn’t so much roll off the tongue as it floats off into the ether, like soap bubbles. Vaporous. Have you ever said “bae”? Say it now. It’s not even like you’re saying anything, right? If someone is there with you, they might not have even heard you—so the best bet, really, is not to say it.

Look, I know as well as anyone that contemporary slang is a fluid, porous leviathan that’s constantly heaving, shape-shifting, and upchucking subtle variations in meaning. But the ascendance of “bae” and the still fresh reek of its lineage are in some ways reminiscent enough of the insidious migration of text abbreviations to message board culture to pop culture to be particularly disconcerting—a further withering of the written/spoken world into something increasingly weird and without real meaning.