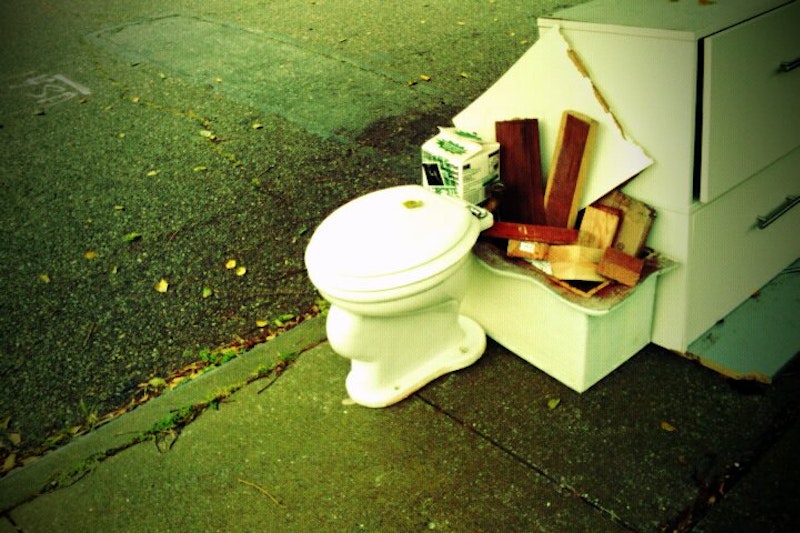 What do you do when you’re walking down Broome St. in Soho, maybe you’ve had one Dean and Deluca too many, and all of a sudden you’ve got this magnificent urge to take a piss? We all know piss waits for no one. In New York, “clean” places to use the restroom are few and far between, if not totally invisible. If you’re like most people, you just roll into the area Starbucks or McDonald’s because it’s easy. But no matter which McDonald’s or Bux you go to, anywhere in the city, there’s always a ridiculous fucking line for the toilet. That, or they do that annoying thing where somebody in an apron/paper hat has to buzz you in or hand you an E. Coli-infested bathroom key, which says “RETURN TO CASHER” on it in black Sharpie. What is this, kindergarten?

And while we’re on the topic, can we talk about why the closer you get to a bathroom, the more you have to go? Now that really makes waiting on line awful. At this point, everybody is rolling their eyes at whoever’s inside—even if they’ve only been in there for 30 seconds—because it seems like forever when you’ve had three lattes and there are still 10 people waiting ahead of you. I’ve seen people literally bang on the bathroom door when somebody has been in longer than a minute. Pee brings out the violence in people.

Unlike Paris, for instance, which has public restrooms out on the streets (not that you want to use those), people in New York are just kind of SOL. Over the past several years, I’ve compiled a handy-dandy, fool-proof list of clean and—most importantly!—line-less, bathroom-key-less places to potty in NYC.

NYU Bookstore (Soho). NYU just opened up a great new bookstore right on Broadway and across from the Tisch School of the Arts, and inside there’s a bathroom. Also: never a line.

Crate and Barrel (Soho/5th Ave.). This is New York’s best-kept secret! I was shopping with a friend in Soho one day and he was like, Hey, I’m going to pop into the Crate and Barrel on the corner of Broadway and Houston to use the restroom. Wait a minute—there are bathrooms in Crate and Barrel? Whoa. This day totally changed my life. Who knew it was possible to urinate among such fabulous furniture. Also: no homeless people can live there!

Barnes & Noble (Any). Barnes & Noble is basically the same as Starbucks, since there’s one on every block (although undoubtedly not for long). The B&N in Union Square is an especially efficient place to go, because of all my years living in New York I don’t think I’ve ever waited on the bathroom there. Ever.

Barneys (Madison Ave.). This is for those of you who find yourself “doing” 5th Ave.—you know, shopping, taking pictures, walking the kids, etc. Fifth Ave. is a curious area of Manhattan, because there’re virtually no Starbucks, no McDonald’s, nothing “fast” directly on the avenue—which probably has to do with zoning. But when you get past the Apple Store, just turn at the Crate and Barrel and make your way over to Barneys and relieve yourself among all the Burberry, Maison Martin Margiela, and Balmain! I guess there’s also Bergdorf Goodman, but I can’t even stand Bergdorf’s long enough to use their fancy ass pisser.

McNally Jackson Books (Soho). Now this place is really a big secret. It’s a small-but-wonderful bookstore on Prince St. in Soho. The place has a really cool selection of magazines and stationary, but be careful not to bring any of these items into the bathroom along with you. Unless you want to get “flagged” like George in that one episode of Seinfeld.

The Strand (Union Square). I spend most of my time in the Union Square area, but that’s really just because I live on the L train. Manhattan doesn’t really exist to me beyond 23rd St.. But anyway, The Strand is the most famous bookstore in all of New York, and tucked away on the second floor is a place for you to just pop in and let it out. Also: never a line. If people only knew!

The list is longer than this, and includes Columbus Circle, Bloomingdale’s on Broadway, and many more. May we all pee in peace.