In other words, Get off my lawn! 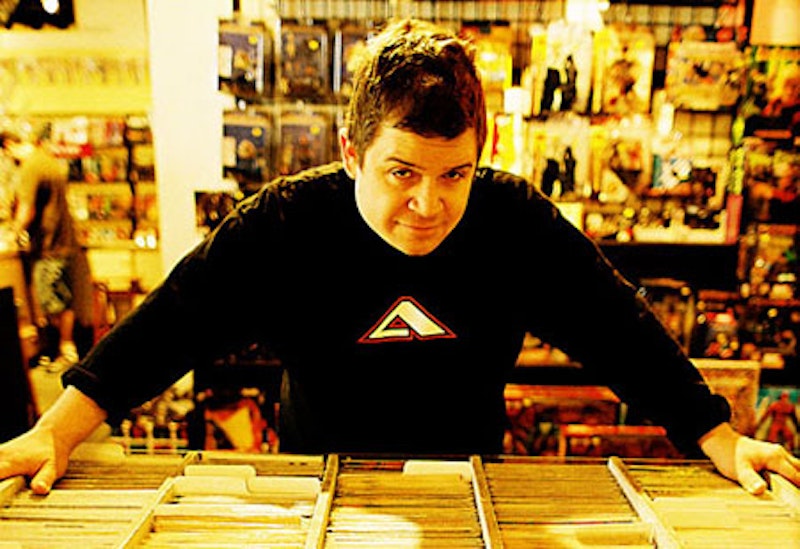 In a recent Wired magazine editorial, Patton Oswalt proclaims that “geek culture” has blossomed so bountifully that it needs to die and begin anew in order to be a true culture again, as it cannot exist in its current state: an omnipresence that permeates all culture. This is, apparently, a huge problem that calls for apocalyptic measures. The Oswalt holocaust is nigh.

Like Oswalt, I grew up as a geek. Aside from the consistently perfect grades and disgusting penchant for overachieving, I excelled at Nintendo (both playing and esoteric knowledge concerning the name of every monster or bad guy encountered in any given game), I played Dungeons and Dragons (and built three-dimensional dungeons out of paper and tape which were never put into use) and I preferred the mystical, Medieval-centric lyrics of Jethro Tull over Nirvana. I wanted to live at the Renaissance Faire, and not because of the ample cleavage. I didn’t really pick up comics until college, but I collected superhero trading cards for as long as I can remember. So, I think I’m qualified to comment, as a confirmed geek and as a fan of Oswalt. I’ll let my action figure collection serve as evidence.

Oswalt seems to take the perspective that geek culture needs to be insular, and that everything he ever loved has been usurped by mainstream culture. Granted, there are no clear lines of demarcation that exist between “us” and “them,” but I think it comes into play when Darth Vader and Justin Bieber t-shirts are found on the same rack at Target. For Oswalt, these two worlds should never mix. Now that the mashed potatoes have touched the Brussels sprouts across the landscape of the dinner plate, everything needs to be tossed out and we need to start over, which is a startlingly reactionary conclusion.

Granted, our current mélange of pop culture seems to be defined by the appropriation of older ideas and remixing them into other objects, and it’s absolutely an obnoxious phenomenon. Pop culture cannot embrace an original thought, and instead propagates things that have some foothold or reference in an object which has already been marketable, but this does not mean the death of “geek culture” in any way. Oswalt’s 1980s geek culture, maybe—but my 90s geek culture is still intact. It might not be in five more years, but at that point, 2000s geek culture will still be safe, and so on.

“Geek” is not defined by being separate, or different, or even unique. A geek is defined by having passion for something specific and microcosmic, and not caring if this passion somehow creates a superficial delineation between you and everyone else. It doesn’t matter what this thing is, and in this indifference lies strength, and often, solidarity. If you embrace geekdom in order to be different, you’re doing it wrong. Geekdom is an element of a greater love; it is not the destination. There’s a level of intellectualizing your interests too, if you’re a geek: finding the parallels between your world and the larger world. For many, geekdom is a manageable way to grasp an unmanageable world.

So, there’s a singularity of old school geekdom happening, and it’s because of the new accessibility of information on the Internet. Oswalt seems upset that he had to wait for the last issue of Watchmen to come out while a younger generation already has it collected into one graphic novel, and a movie, and Heroclix. He’s correct that it’s time to let it go, but fails to acknowledge that there are still new, amazing, geeky things which continue to be created: new things to be passionate about, new springs of creativity and intellect that are spawning these insular subcultures. Because they are not the things that defined him, or things that he has not yet found his way into, they’re apparently disqualified from being a powerful continuation of geek culture. I’m not saying that he’s closed-minded, but his frustration at having people play in his yard is pretty clear.

Haven’t geeks learned to embrace change? We’ve been through a dozen Doctor Whos. We even enjoyed the alternate universe Star Trek “reboot,” much to our collective surprise. We accept the idea of an infinitely powerful computer being able to deliver just about anything we want, from schematics of a distant star system to sushi, in any number of science fiction scenarios, but Oswalt believes that this cheapens information in our actual reality. I don’t think that he realizes that we’re now living in the science fiction he embraced in the 80s.

It doesn’t matter that it’s easier and faster to accumulate the wealth of information about something that defines geekdom—it’s the fact that someone does it at all that defines it. The means do not change the ends, and if this world has more people who are genuinely invested in something, anything, creative and hopeful, it doesn’t matter how they get there, or who they are. What’s the problem with a broader form of solidarity? Isn’t this what generates peace and the proliferation of ideas?

The misappropriation and bastardization of symbols by those who don’t grasp or seek to change, their meanings dates back to the swastika and earlier. It doesn’t matter that the guy wearing Boba Fett’s insignia on his t-shirt doesn’t know that Fett survived the Sarlacc Pit, according to the Star Wars novels. Who cares if Tron is both the new cool and the old cool? Is the desire to be cliquish greater than your genuine passion for something? Sure, there’s a lot to fear when it comes to media homogenization, but that’s why you keep your eyes open for things that are genuinely great instead of tenaciously clinging on to things that you don’t enjoy anymore just for the sake of it.

Nostalgia isn’t about remembering great things. It’s about remembering things that were good at the time. No one can tell me that Captain N: The Game Master was a great show. New good things will come along, Patton. It’ll be okay.

It’s time to let go. Love what you love because you love it, not because no one else does.