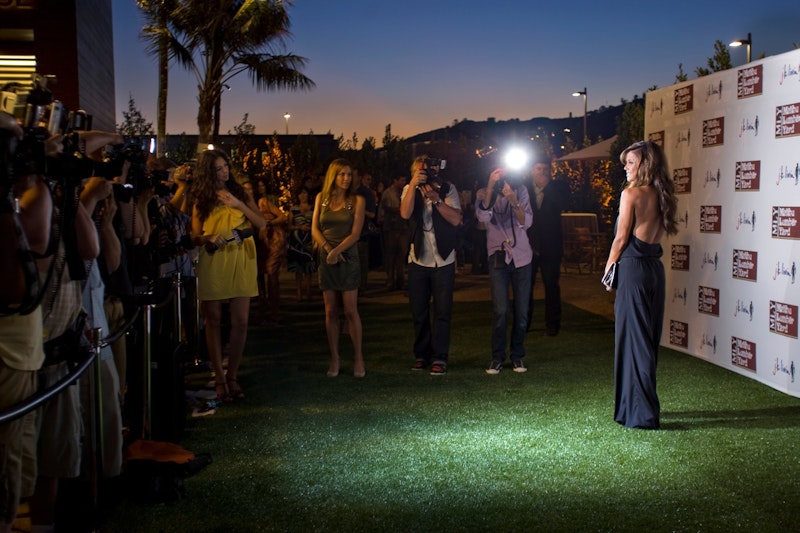 "This is not about art. Listen, we do this every night."

The photographer—good enough to land a spot in the front row, right next to the red carpet for the 30th anniversary of the Museum of Contemporary Art in Los Angeles—was explaining. So I didn't doubt him. He probably did spend every single night outside of movie premieres and black-tie galas, snapping celebrities.

But the man at my right seemed not to care. He was older, a photographer as well, clad in a faded gray photo vest. The two of us were exiled to the back row of the step-and-repeat, but he brought his own stepladder to get a clear shot of the carpet. His gray stubble jutted out in defiance. He was ready to argue.

"That was Francesco Vezzoli. His art is why we're here tonight." The old man stood his ground.

The response from the front row: "Exactly. He's an artist. We take pictures of people and we want to sell these pictures. Artists don't sell."

Defeated, the old photographer began to fold his stepstool and pack up his camera in silence. But the veteran paparazzi in the front row wasn’t finished twisting the knife. "This has nothing to do with art."

I stood on the back riser, holding my camera close and waited for the next celebrity to walk by. I am a part-time paparazzi. The veteran was right—this job has nothing to do with art.

When I tell people this, they picture me in charge of a huge set with expensive lights and assistants toting make-up kits. "No," I say, breaking my own myth, "it's much more like red carpet," a brief pause, then, "more like paparazzi."

Now, don't get me wrong. I don't hide in garbage cans or break traffic laws hoping to get "the shot." Most of the photographers I work alongside hate this image of the celebrity chaser as much as I do. They've even created a

euphemism to separate themselves from the riffraff: We are not paparazzi, we are red carpet photographers. We shoot arrivals. I fear this is delusional.

About a year and a half ago, I started working for a print magazine based in Los Angeles. I reviewed and photographed concerts—basically a dream job without any pay. But I didn't mind. Going to see live music every night and writing about it didn't seem like real work. Six months later, my opinions changing with my sinking finances, I took the only paid opening at the mag. The society page was spending too much on photos from their wire services (Getty, Reuters, etc.) so they decided to move the operation in-house. I became the lone beneficiary of the economic downturn. I was their cost-saving initiative. I felt like the luckiest guy in Hollywood.

My first assignment was to cover Paris Hilton's chartered jet ride from a hangar outside of LAX to Utah for the Sundance Film Festival. In honor of the festival's winter weather, the PR company paid to have two tons of fake snow dumped outside the airplane hangar. It was September.

Paris arrived with two giant St. Bernard dogs in tow. There was a hill for sledding. Some of the minor celebrities casually tossed snowballs at one another. The whole event was preposterous in such a lighthearted way it disappointed me when I saw its ugly side: the photographers.

They were standing in the fake snow, clawing at one another for a prime spot. All photographers worry about being in the best spot. For celebrity photographers, the best spot gives them front-row eye contact with the celeb without having to see the sponsor's branded backdrop. They squeezed together; their jobs depended on it.

A red rope separated the photographers from the celebrities and, for once, it seemed appropriate. Uncaged barbarism let from the pack of photogs as Paris Hilton walked the carpet. Each one louder than the next, they shouted directions at the blonde socialite.

"Over heeeeere," a pudgy photog intoned. A photo without eye contact is next to worthless, so every working photographer battled for Hilton's attention. Paris tried her best to stare down the barrel of each lens in the row. I could see why some celebs have taken to wearing impenetrable sunglasses; with no direct eye contact, there's no reason to fight for attention. And they would fight and catcall without shame. When she passed them by, the photogs would singsong, "Oh-ver the shoul-der," again and again until she obliged them and looked back.

I spent that first assignment shooting the photographers more than the small group of B-list celebs. On the working side of the velvet rope, every photog seemed miserable, angry that they were too old or too fat or too ugly to be walking the red carpet themselves. They seemed to despise their competitive co-workers even more than the celebrities. The whole enterprise reminded me more of the Wild West than glamorous Hollywood. They were a line of prospectors looking to strike it rich.

Deciding to become a real paparazzi, the kind who stakes out houses and speed after celebs is a bit like panning for gold. It can pay just as much—those exclusive pics of Britney Spears shaving her head sold for $500,000. For a business, start-up costs are small: a digital SLR camera, a star map and a willingness to bend traffic laws. Don't worry about picking up a sense of human decency or respect. Those aren't really necessary. I got a chance to witness the real paparazzi in action on a rare night off. They made the vultures that crowd the red carpet look like parakeets.

Megastar Ryan Gosling was DJing an after party at the Bob Baker Marionette Theatre in downtown L.A. I was there for the free booze. Gosling isn't much of a DJ, but I found him to be overwhelmingly kind. After the free vodka dried up and the music died down, Gosling, in a white shirt and black dress pants, started cleaning up. He emptied the trash. He vacuumed the floor. If it was a hollow stab at being thought of as "normal," it worked. I was happy that, for once, I didn't have a camera to spoil the moment.

Most of the women in the crowd were there for the quietly cleaning movie star. They played with thoughts of stardom and romance in a spotless mansion. They wouldn't even have to hire a maid.

Outside, the paparazzi gathered. It was approaching one a.m. when I saw them. I was tired and ready to go home. The clan of photographers was waiting next to the parking lot, careful to stay on the public sidewalk. As I approached them I saw them notice my own white shirt and black pants. They started to raise their cameras, but dropped them again when they realized I wasn't their target. After that, they seemed to ignore me, talking loudly as I sat waiting in the car.

"What if he's already gone? The show has been over for hours now."

"Somebody park behind him—block him in!"

"That fucker. Kept us out here. I'll get a tire iron and take out his tires. We'll get him."

I wondered what they would say if they saw Gosling picking up trash inside the theatre. I wondered how close I was to joining them, hoping to provoke young starlets, praying for an explosion, a lawsuit, a crotch shot. Hoping to find some gold in my pan.

One month later, I was working the carpet with a Getty photographer who used to be one of them. Frazer was proudly British. He was a trained photojournalist, working the slog of a daily paper for years before a shattering divorce pushed him towards the States. His emotions were drained from photographing disasters, car wrecks and murders, as well as the regular stuff like local politicians and council meetings. He was tired of news. So he became paparazzi.

"Calista Flockhart, we used to chase her around. We made her life hell."

We were photographing a DVD release party for the television drama Brothers & Sisters, and Flockhart was in attendance. "I wonder if she recognizes me," Frazer said.

After years of chasing Flockhart and other celebrities, Frazer grew tired of this, too. He retired to a job photographing arrivals. It was easy, a technical exercise. Once he figured out his lighting setup, he could turn his brain off. The subjects came to him. All he had to do was press a button on a box. Far from news, removed from art, he seemed happy.

I stopped the old man as he was stepping off the platform, stepladder under his arm. "Do you know if Jeff Koons has walked by?" The contemporary sculptor, with his giant, metallic balloon animals, was a favorite of mine.

Still upset, he turned to me and said, "I wouldn't even know what he looks like. He's an artist. Nobody photographs artists." He carefully stepped over the cords that powered the giant lights above the carpet, past all of the clicking photographers. We had to be ready—the next celebrity was coming.