The sole surviving outlet of the Baltimore/Washington Little Tavern chain closes, bequeathing memories of languorous ambience if not fancy cuisine. 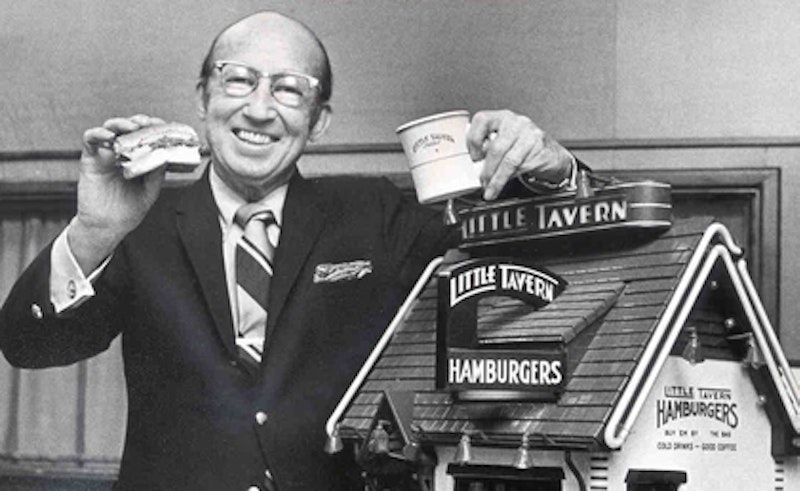 A brief news story tucked away in the "Maryland" section of Wednesday's Baltimore Sun announcing the closing of the last Little Tavern burger joint in the Baltimore/Washington metro area didn't attract much attention, I suppose, at least to those readers born after 1970. Just another regional fast food mini-chain biting the dust, relics of the mid-20th century before McDonald's, and then Kentucky Fried Chicken (once found only in the South), Burger King and Wendy's were established as nationwide institutions. Nonetheless, just as people scan obituary notices as they age, this dispatch caused a momentary wave of nostalgia that interrupted my daily routine.

I'm not one of the old-timers who remember when a "Club LT" burger cost a dime, but for three years in 1970s as a college student in north Baltimore, I was a regular at a Little Tavern located on Greenmount Ave, just a block away from my apartment. It wasn't an easy fit: even 30 years ago this tiny storefront was patronized almost exclusively by locals more than twice my age, and the notion of a 20-year-old longhair crashing their morning or early evening party didn't go over at all well with the clientele or sassy ladies behind the counter.

So I sat on an end stool (there were 12 of them) with two small tables by the window-quietly reading the morning paper or a book while drinking coffee from mugs that seemed to weigh about a pound each. Burgers were a quarter, a slice of gooey lemon or cherry pie the same, and a tip of two nickels was greatly appreciated. Slowly, after showing up nearly every nearly every morning at eight, a pit stop before classes, I wormed my way into the affections of one of the cooks, and earned acceptance from at least some of the crowd. Frankly, it wasn't attention or popularity I was seeking--anonymity was just fine, as long as the "hippie" taunts were kept to a minimum--but it was pleasant not to be treated as an outcast and greeted by my name instead of the all-purpose "What'll it be, buster?" I understand that sounds like a line out of an old Ann Landers advice column, but people really did talk like that not so long ago. Oh, and when you left, and said thanks, the reply was "you're welcome," and not today's ubiquitous, and unbearably rude, "no problem."

In fact, after a year or so of showing up every day, I cracked the inner circle and was accepted as a "regular," which was pretty cool since it meant I could banter about the latest Orioles or Colts game with a retired steelworker or manicurist on a coffee break from a "beauty parlor" down the street. One time, in the spring of 1976, I plunked two quarters into one of the individual jukeboxes on the counter and played David Bowie's new single, "Golden Years," six times in succession, which resulted in a howl from a cranky malcontent who never cracked a smile. Judy, the burger-flipper who'd befriended me, told the guy to shut up and leave the kid alone. She even let me distribute copies of the student paper I edited on the cigarette machine by the door, a swell gesture since the stack remained mostly untouched except by late-night young visitors, impossibly stoned or smashed, who stopped in to buy a bag of burgers.

This particular Little Tavern was my favorite of the group of peculiar, and now vanished, fast-food franchises--I did have a fondness, at least in theory, for the sausage sandwiches with the works at Polock Johnny's, but my digestive system always rebelled after eating one of them--but there was another venue on life support near campus that I'd occasionally frequent after midnight. The place was called Harley's, one of a string of sub shops started by Baltimore legend Harley Brinsfield, a beloved character who hosted a radio jazz show for a generation or so. The food was horrendous, worse than the sterile Subways of today, but as long as a purchase was made, you could hang out there for several hours.

I recall, wistfully, just such an occasion in September of 1973. I was a freshman at the time, and at eight one night a friend delivered the stunning news that Gram Parsons, the iconic "country-rock" pioneer whose work with the Byrds, Flying Burrito Brothers and Emmy Lou Harris still sounds original and fresh, had died of an overdose at the age of 26. My roommate, a guitarist from Houston, and I were floored, so we found a senior to buy us two six-packs of National Boh (the drinking age was then 21, although it was lowered to 18 a year later before returning back again) and walked over to Harley's and for three hours sang folk songs in tribute to Parsons. We were loud, loaded and had awful voices, but no one seemed to mind, perhaps because there were so few customers.

That's not the kind of frivolity I engage in anymore, but it's hard to believe you could get away with such a performance at a Starbucks or Baja Fresh these days. The Little Tavern has now finally passed into the annals of Americana--and the Baltimore Sun, owned by the financially troubled Tribune Co., probably isn't far behind--and while it's certainly not a shock, nor even an occasion for misty eyes, it is another reminder of a country that, for better or worse, once moved at a slower pace.