Our Strange and Wonderful Moon 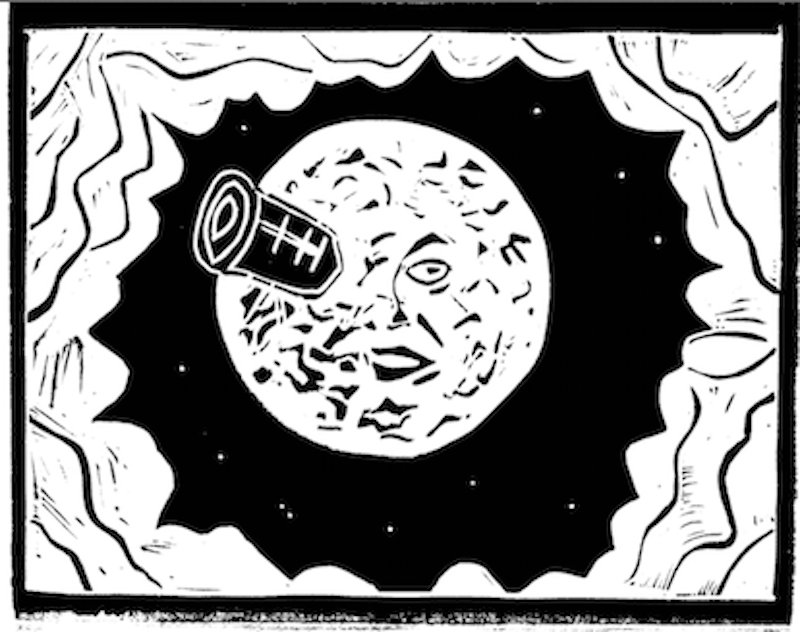 The Moon has always been an object of fascination. Fishermen cast their nets by it. Farmers plant their seeds by it. In ancient Chinese culture, food was laid out at night to absorb the “moon’s rays” which were thought to cure disease. Myths told of the Moon’s propensity to drive us mad (“lunatics”) while poets wrote about its ability to make us fall in love. As our nearest celestial companion, the Moon’s history is ripe with bizarre and curious facts.

There is a Man on the Moon: Dr. Eugene Shoemaker, a geological surveyor, educated the Apollo Astronauts about craters and moon rocks. It was his dream to go to the Moon but he was unable to become an astronaut due to a medical condition. After his death in 1999, his ashes were placed on a spacecraft that was crashed into a lunar crater to determine if there was water on the moon. To date, he’s the only person to be buried on the moon.

The Moon has virtually no Atmosphere: On Earth, the sky appears blue because our atmosphere filters light from the Sun. Since the Moon is nearly devoid of atmosphere, the Moon’s sky always looks black. There’s also no sound on the Moon since sound needs atoms to travel through and the Moon is a vacuum.

The Eternal Footprint: Neil Armstrong’s historical “small step for man, giant leap for mankind” left a footprint on the Moon. Because there is no lunar wind, this footprint is expected to remain intact for millions of years.

Moonquakes: The Moon is prone to tremors called “moonquakes.” They can register up to 5.5 on the Richter scale and last as long as 10 minutes. According to NASA, these quakes cause the Moon’s interior to “ring like a bell.”

Moon Craters: There are more than 500,000 Moon craters that can be seen from Earth. The largest is 144 miles across. The craters are caused by meteor impacts. Every meteor that strikes the Moon is one that does not hit Earth so the Moon functions as our celestial shield. The dark spots that create the so-called “Man on the Moon” are craters filled with basalt.

Moon Trash: Since Apollo 11 first landed on the Moon in 1969, astronauts have left behind nearly 400,000 pounds of trash. Most is comprised of space probes, lunar rovers and debris from experiments. But the trash also includes an American flag, a plaque, a gold-plated record of the musical Camelot and a large collection of astronaut poop bags.

Moon Dust: The Moon’s surface is covered by a fine-grained soil called “Regolith.” Because of constant bombardment by meteorites, lunar dust is extremely rough. The soil clings to everything and has eroded astronaut’s boots and sandpapered their visors. The dust has entered ships with the space suits and caused “moon hay fever” in astronauts who have inhaled it. Supposedly, the dust smells like spent gunpowder.

Dark Side of the Moon: Only 59 percent of the Moon’s surface is visible from Earth. We call the opposite side the “dark side” of the Moon even though it’s exposed to sunlight.

Low Gravity: The Moon’s gravity is one-sixth of that on Earth. Space suits that weighed 180 pounds on Earth weighed only 30 pounds on the Moon. When astronaut Alan Shepard hit a golf ball on the Moon, the ball travelled nearly half a mile.

Extreme Temperatures: Midday temperatures on the Moon can reach 243° F. At night, the Moon gets as cold as -261° F.

The Moon and the Tides: The gravitational tug of war between the Earth and the Moon influences our tides. Earth’s oceans are pulled upwards toward the Moon and try to rotate in sync with it. When the Moon is closest to Earth, our tides are the highest.

Moon Cheese: According to a 1988 survey by the Lowell Observatory in Arizona, 13 percent of those polled actually believed the Moon is made of cheese.

Stolen Moon Rocks: The Apollo missions brought back 2,196 Moon rock samples weighing 382 kilograms (842 pounds). In 2002, two interns at the Johnson Space Center in Houston stole 101 grams of moon rocks. The interns tried to sell the rocks to a Belgian mineralogy club who informed the FBI. A sting was set up and the thieves were arrested. (One of them had previously been charged with stealing dinosaur bones from his college, the University of Utah.)

Blue Moon: When a month has two Full Moons, the second Full Moon is called a “Blue Moon.” This happens every 33 months and can only happen in January or March (assuming February does not have a Full Moon).

Harvest Moon: A “Harvest Moon” is the Full Moon closest to the Fall Equinox. It typically falls in September and occurs near sunset. Before the age of artificial lighting, the bright “Harvest Moon” gave farmers extra time to cut and move their crops.

The Full Moon Diet: Because the human body is 60 percent water, people have theorized that a Full Moon impacts the water in our bodies. The “Full Moon Diet” (or “Werewolf Diet”) is popular among celebrities like Demi Moore and Madonna. Dieters advise that one should consume more fluids during a Full Moon. The Moon’s gravitational pull will stimulate renal activity causing the body to flush excess water and toxins. Followers claim they can lose six pounds in 24 hours.

Moonshine: The making of illegal high-proof distilled spirits from corn mash acquired the name “Moonshine” because it had to be produced and delivered secretly under cover of night by the light of the Moon.

Soundtrack to the Moon Landing: During the Apollo 11 Moon landing, the BBC used David Bowie’s haunting song "Space Oddity" throughout their coverage. This was odd for several reasons. One, the song is a parable for heroin use. And two, the song’s lyrics describe a catastrophe in space where contact between NASA and the spacecraft is lost and the astronaut Major Tom is left to float dreamily through space forever.