One step forward, about one-hundred steps back

The Vatican has never been that quick to change with the times. 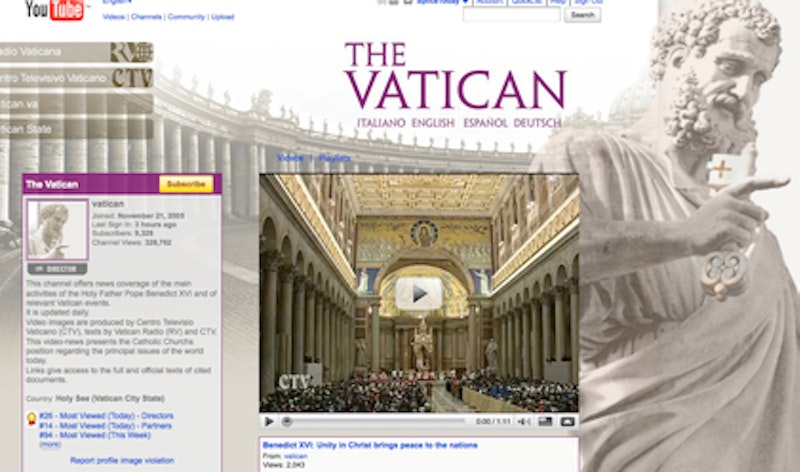 We should all lift our mugs and salute the House of Representitives, the Senate and the Vatican for finally—finally!—catching up with the times and starting their own YouTube channels. How else are you going to keep in touch with today's hip, plugged in, digital millenials? Hmm?

No, but seriously, good for the Vatican:

The thing is, digital saavy doesn't mean shit when you, say, reinstate four excommunicated bishops—one of whom denies the Holocaust:

VATICAN CITY — Pope Benedict XVI, reaching out to the far-right of the Roman Catholic Church, revoked the excommunications of four schismatic bishops on Saturday, including one whose comments denying the Holocaust have provoked outrage.

The decision provided fresh fuel for critics who charge that Benedict’s four-year-old papacy has increasingly moved in line with traditionalists who are hostile to the sweeping reforms of the Second Vatican Council in the 1960s that sought to create a more modern and open church.

A theologian who has grappled with the church’s diminished status in a secular world, Benedict has sought to foster a more ardent, if smaller, church over one with looser faith.

But while the revocation may heal one internal rift, it may also open a broader wound, alienating the church’s more liberal adherents and jeopardizing 50 years of Vatican efforts to ease tensions with Jewish groups.

Ratzinger is taking this on the chin, it seems, and not backing down. Which is a shame. Not even a Twitter account could spin this failure.