Nothing Matters When We're Dancing

The most under-valued art form is also the best cure for stress or a broken heart. 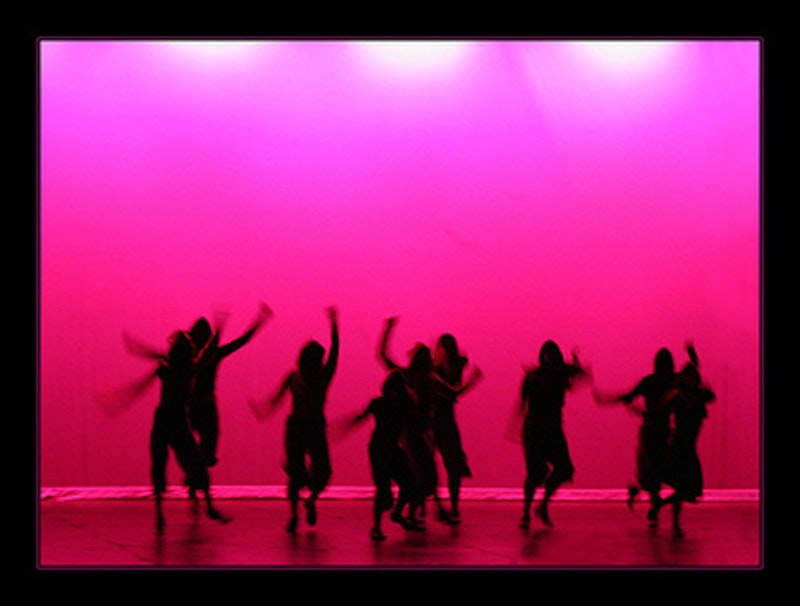 At first glance, New York City looks like the perfect place to nurse a heartache. There are endless distractions in a city this big and countless discoveries in a place so diverse. Every street holds a surprise, and any subway ride is an opportunity for fascinating people watching. Perhaps one or two of those people will even ask for your number, reminding you that though you might feel like hell, you don't look it. Of course, one of those people might be a lunching construction worker who calls you "Sweetheart" and, mouth full, shouts his request, to "See you some night, huh?" across the road as you walk by, in which case, you might want to adjust your tally a little. Or at least sort your offers into columns marked "Hmm, maybe" and "Oh hell no.”

For me, the cure for heartache is, and always has been, dancing. There's something therapeutic about moving, about using your arms and legs rather than your mouth to say what's on your mind. Even if the respite only lasts for one or two hours, it can make all the difference in the world in how you see things. Not to mention how much better you sleep at night after a slightly sadistic dance teacher has worked you into a quivering pulp.

I've been taking dance classes at Broadway Dance Center since I was 15, when I was thinking seriously about a career in musical theater. Back then, I lived in Sydney and came to New York once a year, spending as much time as possible in the city taking dance classes and seeing Broadway shows. This summer, I'm fortunate to be living mere subway stops from the dance studio (which is on 45th St. between 8th and 9th Aves.), and my goal is to dance as often as I can while such an exceptional resource is so readily available.

And so, finding myself at the end of one of those days when all you want to do is crawl into bed and fall asleep, into hours of silent nothingness, but knowing that sleep wouldn't come unless I was totally exhausted, I set out to totally exhaust myself.

The New York Times reported last week that dancers are the lowest-paid artists in the country. After an hour and a half watching these women (and just two men—people, sign your sons up for baseball and ballet!), I am convinced that they are also the hardest working. Dancing works every muscle in your body, and then it seeks out muscles you never even knew you had and works them too. To dance demands extraordinary strength, balance and flexibility, but that's not why the men and women who take class at a studio like this day after day, sometimes for three or four hours in a without a rest, are remarkable.

They're remarkable because, in the five or so years that I've been visiting the studio, I've never once heard a dancer complain about getting up in the morning to be there, or say that they'd rather be in bed than in dance class. This is not like a gym; none of us is there out of a sense of obligation. We are there because we love it, and because, when we get hit with a heartache, we know no other place to go; we know no other way to get the ache out of our hearts than to get it into our bodies. And so, we dance. We dance, and we sweat, and we walk out sore and aching and tired and drag ourselves onto the subway looking flushed, exhausted and limp.

There is something comforting and familiar about a dance class. It's familiar even in a foreign country, with a new teacher and in a class full of people you've never met, because the format is nearly always the same: you get warm, you stretch out, you do an abdominal workout that should be prohibited by the Geneva Convention, and then you learn one or two short routines. Because the official language of dance, at least in ballet and jazz classes, is French, every dancer and teacher speaks a common language, literally, the lingua franca of dance. Of course, French is also the world's most easily mangled language, which is why French ballet terms, when pronounced by an American or Australian dance teacher, can become almost comically unrecognizable. But to take dance class from a French teacher, as I did last summer, is music to the francophone dancer's ears.

Oh yes, and then there's music. If you're like me, and music has a powerful effect on your emotions—if you have play lists titled "Get Happy,” "Smile," or "He's Just Not That Into You,” then you'll understand how the hour-and-a-half of music alone can make dance class feel like a very crowded, very sweaty therapy session. Of course, if you get stuck dancing to an Ani DiFranco song about sadness and depression as I did on Monday, there's not a whole lot you can do except let the music wash over you and hope that is washes away some of your own sadness.

In a town this busy, there are plenty of things to do to keep your mind off whatever's ailing you. It's a big city, and if you're new here, you probably don't have a huge list of resources and people to call on. And in that case, sometimes it's best to go back to what you know, to what's familiar, to what feels like home. In my case, that's moving, music, and mangled French verbs.