Not a Guilty Pleasure, But Sheepish

Me and Joseph and the Amazing Technicolor Dreamcoat. 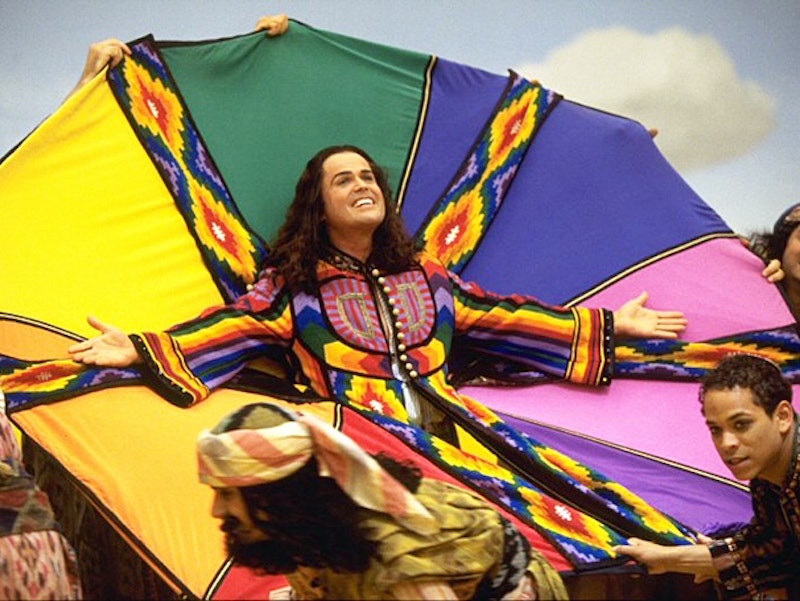 I’m against the phrase “guilty pleasures.” Anything that I like is something I find worthwhile, because I like it. But it’s easy to make me embarrassed, easy to make me doubt myself. There are topics on which I’m off balance. Joseph and the Amazing Technicolor Dreamcoat, for example. To honestly say how much I like it (lots) would throw a pall on conversation. It would be like discussing one’s methods for maintaining toe and fingernail length minus scissors. Not that I think Dreamcoat is such a bad thing. But everyone else does, and this attitude has a weight that throws me. Somebody debonair might float Dreamcoat love as a topic. I couldn’t.

First, I’d have secrets. I never heard Dreamcoat as a child. I was an adult, college-aged, and read about it in The New York Times. I remember this as a discovery, something I had to check out. Then, listening to the album, I felt clever. The imitations of different song styles struck me as neat, and I liked spotting the features that marked the show as a kids’ spectacle, something the parents trooped them out to. How the children must shout along to the read-off of the coats’ colors (“and red and yellow and green and brown and scarlet and black and ochre and peach”).

Dreamcoat seemed like a cunning, intelligent show. In fact, to me it still does. But I can’t say those words to anybody. I’d feel like I was trying some reverse swank, some listen-to-me inverted snobbishness. Either that or I’d shrug and look down when the other person made a face. But Dreamcoat is an intelligent show. It also has a flow of varied but fast-paced tunes that strike me as dead-on. I love tunefulness, and I know that often it isn’t found where advertised. Most of Andrew Lloyd Webber’s scores, for example. Mainly they’re grim, but not this one. The score for Dreamcoat demands my love and receives it. By Jeeves, also by Lloyd Webber, does the same. Of course, with Jeeves there’s cover: the show’s for adults, and P. G. Wodehouse and Alan Ayckbourn make for nice things to mention. Whereas Dreamcoat leaves one bare. Yet to me the two shows are bound by a paramount trait, one that sets them off from every other show in the world: they have exactly the tunefulness that one would expect from the world’s supreme composer of show tunes. The lilt and color spill from taps.

I’ve seen just one production, a studio movie filmed in the late 1990s. As with the score, I’m sand-bagged by circumstance. Honestly, I’d have to say that this is an admirable film done with flair and a high level of skill. All details are well attended to. Yes, the star is Donny Osmond, aged 40 and with teeth like a porcelain fixture bursting above his chin. One notices what a broad mug of a face he lugs around, and its resemblance to that of a tooth-straightened and disinfected Leo Gorcey. But Osmond works fine. Whatever you have to do to sell Joseph, he does it. His lip-synching and cavorting are up to the show’s standard, and the condition of his body is first rate. Really, if you have to be Donny Osmond at 40, the edition on view looks like not a bad thing to be. He represents high quality of a sort, the best possible Donny Osmond available. The movie itself may be the best possible Dreamcoat available. And Dreamcoat is something I’ll always love.