You know, from pretend Internet people. 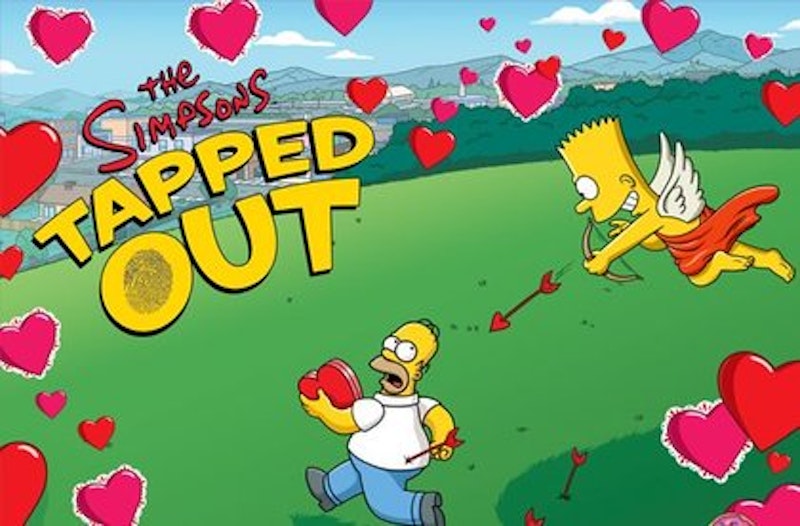 I admitted on Splice once before that I have an addictive personality and am thus prone to addictive apps on my iPad. I’m a dork. I Buffer-app things to my Pocket app from my Buzzfeed and Flipboard apps. And if you understood that sentence, I’m sorry that you, too, have no social life. Since writing that app column, I’ve used other apps/games including but not limited to continued play on SongPop, The Room and Machinarium. In addition to demonstrating my expertise in SongPop categories like Soft Rock and Jock Jams, I love to play questy puzzle games; if you recommend any, please leave a comment.

But the number one app addiction of mine at the moment is… ah, I’m so embarrassed to admit this. Laugh at me; I laugh at myself. And let me just say, the only reason I play this game is because my teenagers were playing, then I started playing it, then my younger two kids started playing it and now we all just play it. Okay, it’s the Simpsons Tapped Out game. If I can admit to liking Air Supply, I can admit to playing the stupid Simpsons game.

In case you’re not familiar because you have more important things to do like working, or parties or family or friends or streaming something, anything on Netflix, the game is basically a cartoon version of the Sims. (It’s cleaner, though, because I can’t let my younger kids play Sims where you can have people make out and “woo hoo” or kill them by putting them in a pool and taking out the ladder.) It takes place in the Simpsons’ original Springfield town. In fact, the game starts out with a nuclear explosion because Homer has blown up the plant, and Springfield needs to be rebuilt.

It’s like any other online game—you get coins for doing stuff, you spend the coins on building stuff, and so on. But there are a few things that have kept me from becoming bored and quitting the game. First, it’s written by Matt Groening, or at least his many writers, so it’s actually funny. The game mocks you for playing the game, makes fun of itself, and always has something new going on, especially if you have “friends” in other “Springfields” who “stop by” your town to “vandalize your buildings”. You can buy “donuts” with actual money and then buy premium buildings and goodies, but I’ve spent nothing on the game even though I really want the theater building and the cute Lard Lad donut shop.

I wasn’t really into the social aspect of the game at all at first; I just like using basic urban planning and landscape design principles to make my town as attractive as possible. There are no parking lots in my town because they’re ugly, and also because the Simpsons don’t drive cars in the game, so why spend coins on parking lots? My residential and commercial parts of town are also clearly distinct. If there was Springfield judging, I think I’d be doing pretty well. But my anti-socialness ended when the Valentine’s Day update came, and then my daughter and I went onto the chat forums online for the game to get usernames so we could go see other people’s towns and critique them and also get Valentine hearts from them.

So now, since the update, when I open my Springfield, there are little “Be Mine” notes on my buildings or people and they’re so cute and then you can spend your “hearts” on things like the new flower shop and ice cream shop buildings, rose bushes, a miniature golf course, etc.

It was an extraordinarily happy moment for me when I started getting valentines from other town people. I was all “oh! I got three valentines from jqzf0529!” and, seriously, how pathetic is that? What kind of loser do you have to be to be happy to get pretend valentines on pretend buildings from pretend townspeople who are actually probably 12-year-old girls with Justin Bieber posters on their walls or 57-year-old serial killers who live in damp cellars and are just playing Simpsons while they take a break from offing people?

I feel better coming clean about my closet app game playing. I’m reading a book on my iPad, too, you should know, and it’s really good. I’ll do a book review when I’m finished, so we can all pretend that I don’t send pretend valentines to Internet strangers.

—Mary McCarthy is on Twitter, which is for grownups @marymac and her username on Simpsons Tapped Out is marymac1969 if you would like to send her a fake valentine.