In which our media-addled columnist laments, “Converters? We don’t need no stinkin’ converters.” 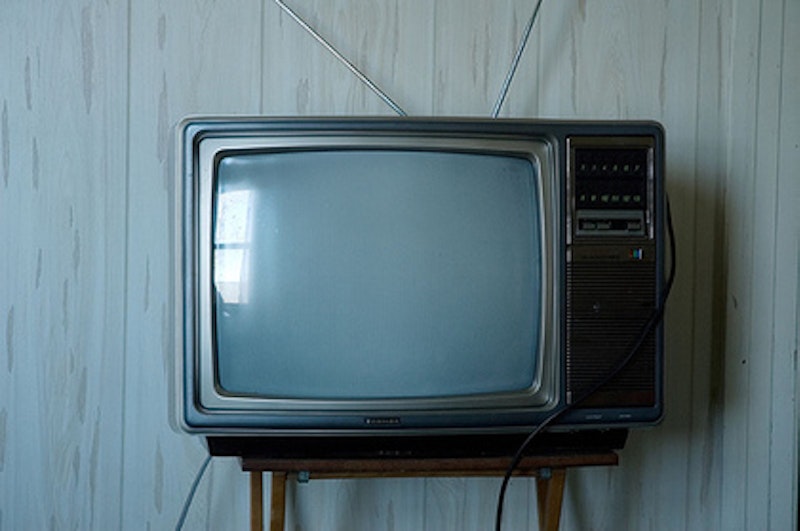 Wow, hey, first of all, Happy New Year to anyone who knows how to read—specifically the Mr. Wrong column—even you hateful Haters. I love how The Haters comment their Comments about the Mr. Wrong and get all alliterative, with like, alliteration and stuff to like, to prove they are Writers. You are Haters! I am Pro! Happy New Year!

OK, anyway, I’m still here and I am certainly surprised to still be here, and by “here,” I mean The Earth, and I was all set to declare my unbridled Optimism about the still-nascent Year of Our Lord Twenty-Ought Niner, but then I remembered they (you know who They are) are in the final stages of snuffing out my beloved Teevee, the kind of Teevee that is all static-y and free-of-charge—Broadcast Television, if you will.

First of all, Killers of My Television: fuck you. Who asked for this switching of frequencies bullshit or whatever it is that will take away all my Analog and make me watch Digital? Not me, man; all I do is watch the thing, and it’s been all good for what, how long has there been Television, like almost a thousand years? And now you’re telling me my set won’t work for the Broadcast Television unless I buy a converter box? For Free Teevee? Wha?

I have said this many times about any kind of subscription service, be it cell telephone or the ever-evolving miracle that is Cable Television, and now I gotta say about what up until now was one of my Rights as a Citizen of The United States of America, Inc.: seriously, you want me to smoke the crack, the least you could do is gimme my first pipe free of charge. If I’m gonna ride the White Horse, the least you could do is comp me the saddle, yes?

Me sitting on ass out on my porch watching my portable TV Set is totally Good for the Business of America, which is Business! Free Teevee carries Important Consumer Directives (aka Advertising) that help me decide if I want Coke or Pepsi, kna’mean? McDonalds or Whopper? I am currently enjoying the “people from Distant Lands eating hamburgers” series of Consumer Directives currently in play on Teevee, everywhere. How can The Man not see this? I don’t mean not see Whopper is better, everybody knows that, I mean how can They not understand nobody pays attention to Public Service Announcements? People only Obey the messages of Advertising, man! There’s gonna be people out there minding their own business watching some Teevee on Feb. 16 or 17 or whatever and then BZZ-ZZT!!! No more Teevee! Aiieeee!!!

And also, what the fuck is it with these converters? I ordered a coupon and: nothing. I also moved to a new domicile and got screwed outta my coupon at the new castle because "somebody already ordered coupon" or some kinda bullshit! I should get as many coupons as I want, yo! I gotta lotta Teevees! The Government should have like helicopters or something dropping those shits outta the sky over all the houses in America! And the coupon should be for 100% off! And you should get a free Whopper for Obeying! And hey, free TV Broadcasters? You should have a bucket of these things available at your teevee station, and I mean actual converters, not coupons. I don’t want the Government dropping converter boxes outta the sky, umkay?

And have you seen these fucking converter things? I got a little portable teevee in my kitchen where I listen to the Today show featuring Al Roker and insane geriatric Willard Scott. The set fits on my kitchen counter and the goddamn convertor would be half the size of the teevee! Where’s the design form-factor or whatever? I thought this was The Future? Where's the compact miniaturization or whatever? Oh, right, that'll be the next wave of converters, after people buy from the first wave of totally crappy ones that probably aren’t worth more than 10 bucks, and wait, let's see, the coupon is for what, $40 off? And the box costs how much? Am I nuts, am I all alone thinking bullshit, the math takeout equals the price They wanted to charge me in the first place? Hah? And you’re telling me they can't make a teeny-weeny li’l converter that won’t mess up the beautiful lines of my beautiful Sharp model 3S-IIIR? This is a plot.

I mean, this is way worse than that The Day The Earth Stood Still movie (the good one, not the crappy remake) I mean, this means some people are gonna be NOT WATCHING THE FUCKING TV because they don't do the tech thing! Less people watching TV = less ratings, yes? Am I completely off base here? What am I missing besides the constitutionally endorsed right to watch some Teevee? And where's the FCC? They should be helping, no? Instead of running around censoring everything? Man, am I glad to not be censored by an FCC-type organization here on the Splice Today dot-com, where I am only censored by The Editors, otherwise I would not be able to properly convey my complete fucking dismay over the way this National Emergency is being handled. Yes, this is a National Emergency. The local authorities should be patrolling the streets with loudspeakers telling people they are gonna not have any teevee! It’s The Final Countdown!