In which our frugal columnist laments the selling of New, rather than the more honest selling of Stuff. 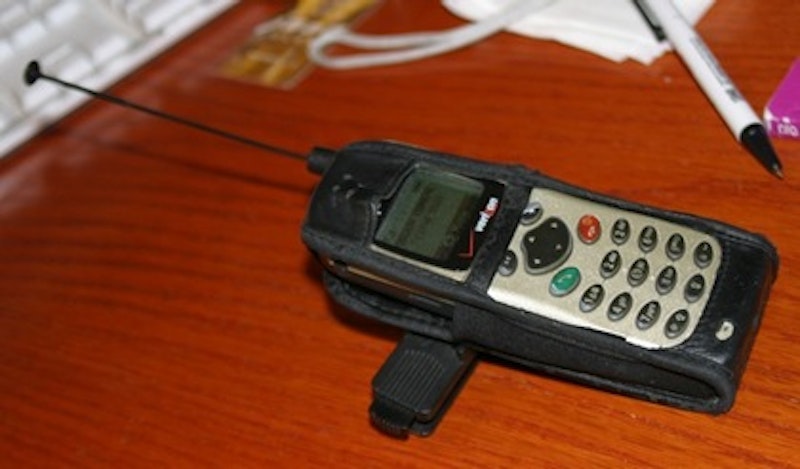 The author's own cell phone, believed to be gas-powered.

I hardly have anything new. Okay, I go through a lot of socks and underpants, and I prefer to buy The New in that respect, but as far as whatever they're called, like Durable Goods or something, I pretty much hang on to stuff until it falls apart or explodes. I bought a new computer, but it wasn't really new, it was a "remanufactured" computer that was already a year or two old when I bought it. I ride around in a 12-year-old car (which some fucking idiot tried to steal the other day, thanks for destroying my ignition lock, dumbass), I rock the iPod Mini (obsolete) and I have a five-year old Cell Phone. That's the one that seems to be the dealbreaker in social situations. Not that I am overly social or anything, I'm just saying whenever I pull out my Kyocera QUALCOMM QCP 2035a, I get a lotta like "whoa, that certainly is an old cell phone you have there, ha ha! I thought it was a shoebox, har! Hey, how long is the cord on that? Ho!" Hilarious.

Also a lot of people attempt to seek cover behind sheets of lead and stuff so they don't get their brains nuked by all the radiation coming off my antenna, I guess. My phone has an antenna, and I don't fucking care, it works, it makes phone calls (if I fully extend the antenna), and it hardly uses any gasoline.

All that shit I listed above was brand-new once, so I guess it's not like I have newshitophobia or whatever, it mostly just means I totally fucking resent having to purchase any new New Shit under this whole accelerated New Shit purchasing schedule, and Cell Phone is way the fuck up there. I mean, cars, that's an old racket, The Man working on you through teevee and video and the movies to get you to buy a New Car alla time because your car is not New or maybe not cool enough, and my Civic is totally uncool, except now maybe it's cool for the Criminal Underworld, because there are lotsa parts to harvest and sell to unscrupulous automobile body shops or something. That's what the tow truck guy told me when he picked up my car, anyway. Plus he told me my car is super-easy to steal and I should get The Club or whatever because it's probably gonna happen again unless I put a big sign on my ride reading NO RADIO, AIR BAGS, SUSPENSION PARTS, TRANSMISSION, ENGINE, FLOOR MATS, ETC.

So I say, fuck New Car as long as my old-ass car is rolling in the direction I enjoy (and I'm in it), and fuck New iPod until they are vending them outta gumball machines at the supermarket and you can just like, stick 'em on your forehead or neck or something, and double, triple, fourple-fuck New Cell Phone unless it's the kind you get for free when you have to pay for the hookup.

I don't have a lot of experience with the Hard Drugs, but whenever I see people get hooked on Whatever Ain't Phonics, they usually get that first shot, snort, or lung-roasting inhalation Free of Charge, and after that, you're a Valued Lifetime Customer, right? I'm already a goddamn Lifer on the phone, and it pisses me off to think I get no respect for my years of faithful patronage, you dig? I think it's a total fucking racket the way these phone companies try and jam you for New phones, because all the shit's gonna change in a year. Look at the fucking iPhone, man, they got errbody drooling for the first one that cost like 600 bucks, and then alla sudden it was what, $400? And now they got the new iPhone which is way cheaper and better because they couldn't do that the first time, and people are gonna go and get a new one even though there's nothing the matter with the one they have except it ain't new? Right? They're not even selling stuff, they're just selling New. I have no illusions or anything about my level of Consumerism, okay? I know my phone didn't cost shit because it ain't worth shit. If I lose it (which I probably never will because we already established it ain't worth shit) I won't whine too much about it (except for losing all the phone numbers inside) because I'll go and get a new cheap-ass phone from the motherfucking bloodsucking phone company and they can keep getting my 45 bucks a month to talk on radio waves that are supposedly owned by We The People anyway. So look, I'm not trying to tell you how to live your life, seriously, you want a new phone every month, go forth and Consume.