Monsters in the News

Spooky tales of chupacabras, UFOs and Bigfoot during Halloween week. 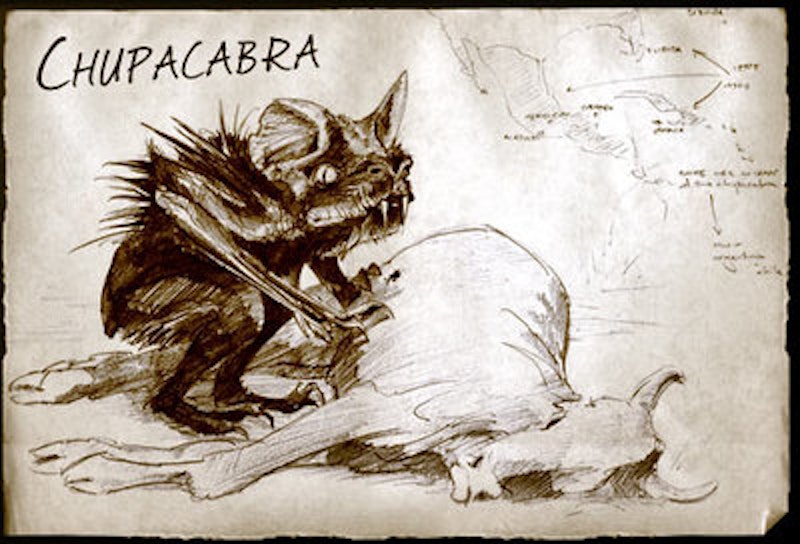 I’m not sure whether actual news outlets go out during Halloween week to find scary stories, or whether there is just coincidentally some creepy shit going on in the world, but either way, these are a few reports that I’ve been pretty spooked by.

“If a zombie had a dog, it would look like that,” said Jennifer Whitfeld of Picayune, Mississippi, pointing to the area in her yard where a video was captured of an extremely strange looking creature being referred to as a chupacabra. In case you’re not familiar, a chupacabra (Spanish from “chupar” which means to suck and “cabra,” a goat) is a livestock-eating semi-mythical animal described on Wikipedia oxymoronically as a “contemporary legend,” originally spotted in Puerto Rico with sightings reported now as far north as Maine. “A coyote really bad off with the mange” is the way the local natural resource officer described the animal to CNN in this video. And a guy actually killed one in this video. I like zombie dogs better myself.

CNN is also reporting a number of UFO sightings. In Florida, this woman caught a security video of an alleged flying object hovering over a pool in this video, and there’s another video of UFOs over Kentucky. Then there’s a guy (“When you see a UFO, you know it’s not from here.”) who built a UFO welcome center; the oddest part of that story is that Anderson Cooper (“If I was an alien, that welcome center would be my first choice.”) is reporting on it.

I haven’t heard Bigfoot stories since I was a kid, but hey this is Halloween, so CNN has coughed up not one but several Bigfoot stories. This guy Ken is telling an actual news reporter that Bigfoot lives in his backyard and is scaring him off his land. His alleged evidence is a sofa and some firewood being moved. He thinks there is a family pod of Bigfeet on a migratory trail on his land. “It’s probably listening to us right now,” he told the news reporter. Another CNN report discusses Bigfoot sightings in the woods of Kentucky including a video.

And these are CNN stories. It’s not BuzzFeed putting together some bullshit listicle in time for All Hallow’s Eve.