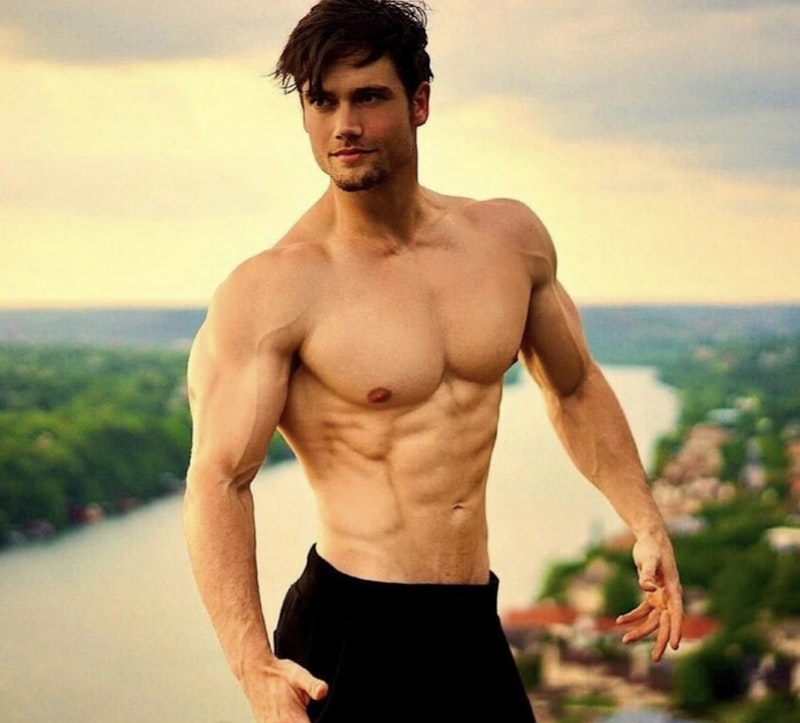 If straight young men ever had any doubts that a man’s physical appearance matters to women, or that a chiseled physique could be the cheat code to instantly producing rapid palpitations in a lady’s heart, there’s no better evidence than a Connor Murphy Omegle video. Footage of Murphy surprising women by removing his shirt on the randomized internet chatting platform has garnered millions of views on YouTube, birthed several imitators, motivated thousands of workouts, and also launched Murphy’s successful career as a social media fitness influencer who preaches the power of male aesthetics and its hypnotic hold over millions of women.

For years, I’ve wondered what it was that first prompted Murphy to slather oil on his torso, optimally arrange the lighting in his room, and then unleash his shiny muscles on dozens of unsuspecting ladies who were caught entirely off guard, but who didn’t seem to voice any complaints. Murphy agreed to answer my questions about the Omegle videos that transformed a senior at Southwestern University into one of YouTube’s most subscribed-to fitness personalities.

Splice Today: What prompted you to get on Omegle and record your interactions with women?

Connor Murphy: That’s an interesting story. There’s this guy in the bodybuilding community. His name was Zyzz. He died many years ago. He was the starter of the aesthetic bodybuilding culture on YouTube. He built up a great physique and went out on the street and would be like a troll, flexing his muscles. He was shown hanging out with different girls, and he inspired a lot of what people do today in the bodybuilding community. There are Instagram pages dedicated to him. He’s a legend in the bodybuilding world. After he died, people would take old footage of him in his room where he’d take off his shirt, and they would put it on Omegle. It was fake Omegle footage of this bodybuilder, and they’d get girls’ reactions. The girls were obviously liking his physique, and they got some decent reactions.

I saw that online, and said, “Hmm… this is pretty interesting, but no one has ever done this live or in person.” At the time, I wanted to be a fitness influencer in the YouTube space, and thought it’d be a good idea for me to do it live since no one had ever done it before, and the footage might go viral. It took a lot of work because most of the people on those chat sites are just guys. It was easy in the sense that I didn’t have to go anywhere, and it didn’t require a film crew. I just sat in my dorm room at Southwestern University at night. I made it happen, and those videos went pretty viral. That’s definitely what got my career started off. Some other channels asked me if they could post the footage, and I said, “Sure!” They already had an established YouTube fanbase, and that gave me my first several thousand subscribers, and it went up from there.

ST: What was the video preparation like? Did you have to configure the lighting in a special way or get a preemptive pump going? Also, did you tell any of your friends in advance that you were planning to do this?

CM: I did set up a light. It was just a desk lamp that was taped to the ceiling with duct tape. I wanted it at a very specific angle. It needs to be above you but not directly above you to shine the light at close to a 45-degree angle. You want it shining at you but also down to give you the optimal cuts on the abs and show off the shadows. I also had some oil, so I’d oil myself up. I was wearing a jacket in the first few videos that would hang straight down, so I’d be oiling myself up under the jacket. I’d have to keep putting on oil every 30 minutes or so because it would rub off and not be shiny. Every five minutes, I’d do 10 to 20 quick push-ups to keep the pump going.

I never told anyone in advance that I was planning to do this, so I didn’t need any convincing. I was just determined to do some viral stuff. I’m naturally introverted, and especially back in college, I was a really shy guy. I got made fun of a little bit in my fraternity once the videos first started coming out and they saw them, but once the videos started going really viral no one made fun of me after that.

ST: If you were doing push-ups every five minutes and reapplying oil every 30 minutes, how long did these Omegle sessions take to film? Is this something that took you hours at a time until you compiled enough footage?

CM: Those videos took a very long time to put together. They'd take anywhere from four to 10 hours, and sometimes I’d have to shoot them over multiple days. They take so long because only one out of every 20 to 50 people is going to be a girl, and ideally you would want it to be the right type of girl. That means you want her to be of age for starters so that people aren’t calling you a pedophile. Sometimes they’d immediately “next” me. So it was only probably one out of every 100 times that I’d get a good reaction from the right type of person.

ST: Did you ever get reactions that were so over the top or inappropriate that you decided not to include them? Or did you ever get any stalkerish interactions where girls from Omegle would track you down later on after the videos went viral?

CM: There were a couple times where I could only show the first parts of the interaction. There were definitely a few cases where the girls would start flashing me, and obviously I couldn’t put that on YouTube. I wasn’t into it for that anyway; I just wanted to make content. So when that stuff happened, I would move on to the next person. And there were some girls who would find me on Instagram later to say “Hi!” or they’d say, “I’m the girl from that Omegle video!”

ST: There’s the video where you pretended to be a nerd or a golfer, and the one where you were in a toga. At what point did you decide it was time to branch off into other sorts of content like the public body reveals or your talks with people on the street?

CM: The videos all did pretty well, but three or four videos in I realized they were repetitive. I’m doing basically the same thing every time. At least they’re somewhat unique because each reaction is going to be a little different. My later videos weren’t going as viral as the first ones, and I had the idea that I’d like to do some public stuff even before I started the Omegle videos. The second video I ever posted was of me doing a shirtless modeling thing in an Abercrombie store window, so I always had the idea that I would do stuff in public. It was tough to figure out exactly what that should be, formulate the perfect strategy, find the right place, find a camera person, and then determine what I should do. At the time, the Omegle videos were working really well so I just focused on that, but I knew from the very beginning that I wanted to eventually do stuff in public.

ST: Where did your specific interest in aesthetic bodybuilding come from?

CM: There’s a niche of aesthetic bodybuilding that’s different from normal bodybuilding. It’s more about getting a good physique to get girls and look good instead of the hardcore competitive thing. That was started by the legend Zyzz. Then there was another guy named Jeff Seid who went out in public and did some shirtless stuff. Even though he only did a couple of them, I could tell that people really liked those videos and wanted more of them. Those two people were my main inspirations.

ST: Was there any desire on your part to use this as a testing ground to prove that women tend to respond to an aesthetic ideal better than they respond to the muscle-bound bodybuilding look?

CM: Kind of. I always had a pretty good physique, although I really turned it up when I knew I was going to be doing this for a career. At my peak, I stayed around 200 pounds at 6’2”. Girls would compliment me on my physique, so I had an idea that it’dbe well received. But you could certainly say that it was a good test. There were no guarantees that I was going to get those sorts of reactions from random people on the internet, so when I did it gave me a boost of confidence to do stuff in public, and knowing that people would probably react similarly to it.

ST: Is there a fine line in your mind between where aesthetic bodybuilding ends and where traditional bodybuilding begins?

CM: It sucks because that line is so dynamic; it’s changed over the years. When I started, people would say that the men’s physique competitors (as opposed to the classic physique and the regular bodybuilders) have the ideal aesthetic physique that looks good. After the men’s physique class came out, the winners just kept getting bigger and bigger to the point where you have to be on a few anabolic drugs just to be competitive in the category. The old-school men’s physique competitors, like when Steve Cook was winning competitions, to me that’s the true ideal aesthetic physique. But even the old guys like Arnold Schwarzenegger or Chris Bumstead, I’d still consider their physiques to be very aesthetic-looking. I think the real line comes when bodybuilders start taking so many drugs like insulin and growth hormone, and it starts distending your gut. That’s when it starts being more about mass and less about aesthetics even though they still have six packs despite it being distended and big. That’s when it becomes not aesthetic. In my opinion it stops looking good when the guts start getting big.

ST: Did you receive any sort of consistent criticism for some of the stuff you were doing on Omegle by recording people’s reactions?

CM: The reactions to my videos were mostly positive, and especially the reactions to the Omegle videos were positive. My audience consists mostly of guys. Girls may have appreciated my physique in the moments the videos were recorded, but the audience for the videos is mostly guys looking for motivation to get a good physique. You always get some haters, though, especially when a video reaches a large number of people. It’s just stuff where people would say I’m a douchebag or a tool, or I’m arrogant and cocky. It’s the standard stuff you’d expect someone to receive if they keep taking their shirt off. It never really bothered me.

ST: How do you feel about any of the Omegle copycats that have sprung up in the time since you recorded and posted your first videos?

CM: I wouldn’t consider them copycats in a negative sense. I never get upset when people copy my stuff. People have done the stuff that I’ve done, not just the Omegle videos but the street videos, too. I haven’t seen anyone do it and then try to say that it was their idea. People have done videos and said, “I’m going to do the Connor Murphy fake shirt trick!” I don’t think of it as a negative. In fact, I encourage more people to try to do the content that I do. But it was pretty obvious after I did the Omegle videos that a lot of smaller channels tried to do the same thing. It was clear that they got inspiration from me, and I encourage that.