Mothers teach girls about body image years before the media becomes an issue. 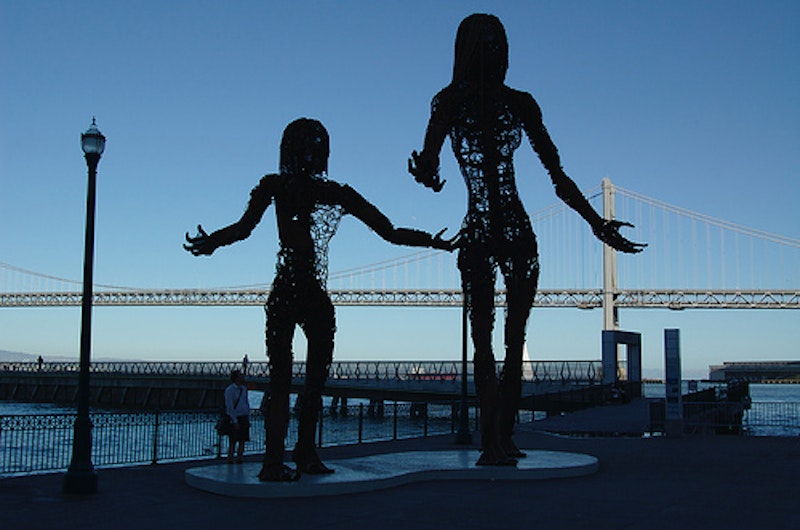 A few weeks ago, I was at the beach with some friends. As we lay on the sand reading and chatting, one of my friends sat up on her towel, looked down at her stomach and started poking it with her finger.

Changing the subject, I asked her about her navel piercing. We spoke about how we both came to have our belly buttons pierced, and I explained that, when I finally convinced my parents, my mother had come with me to get it done. After months of needling, cajoling and outright begging, she had finally conceded, partly, I think, because she hoped that a navel piercing might prevent, or at least postpone, my getting a tattoo (as always, she was right).

My mother was disgusted by the piercing procedure. Even I was a little taken aback upon learning how the piercing would be done. But I went through with it, partly because I wasn’t about to back down after months of pestering her. In retrospect, it was fitting that my mother was there—even if she did think I was mutilating myself. After all, it was by my navel that we were connected for nine crucial months. Today it’s just a simple knot decorated with a gold bar and a butterfly. And, as is often the case, my relationship with my mother has become far more complicated than it ever was in those first nine months.

Back at the beach, I looked down at my stomach and pierced navel, and thought about what my friend had said about her stomach. And I started thinking about body image and mothers and daughters, and about how a woman’s relationship with her body is so often the result of how her mother taught her, either overtly or by example, to think about her own body, and about women’s bodies in general.

Writing about young women and eating disorders in her book Perfect Girls, Starving Daughters, Courtney Martin wrote that, “Some girls starve themselves expressly to avoid growing into adult female bodies and inheriting their mothers’ lives. Some girls overeat and get fat to wound their weight-conscious mothers. Some girls become sports-obsessed, in part, to drive home the point that they will not be dainty and domestic like their powerless moms.”

One of my college classmates, Emma, had an obsession with her stomach, spending at least an hour every day doing exercises to keep it flat, and spending many more hours in an endless cycle of bingeing and purging that most women live out on some scale, even if they never do anything as extreme as making themselves throw up or abusing laxatives. It can be something as seemingly harmless as, “I shouldn’t have eaten that cheesecake” or “I’ll have to go for a run to make up for this,” but there’s no doubt that almost every woman lives this cycle every day.

As for Emma, I never understood her perpetual desire to lose weight—she looked fine to me—until I met her mother. As I watched them interact and listened to their endless conversations about calorie counts, my friend’s behavior began to make a lot more sense. Emma wasn’t born hating her body. No woman is. As Lieutenant Cable once sang of racial prejudice in South Pacific, you’ve got to be carefully taught. And before a girl is exposed to media images of incredibly thin women, before she is pressured into dieting by girlfriends, she is carefully taught that her body is always imperfect, but always perfectible, by the most influential woman in her life: her mother.

If our mothers set bad examples for us, they are hardly to blame. They were also taught to hate their bodies, not just by their own mothers, but by a society that told women then, like it tells us now, that their worth as people would be measured by the curve of their hips. If they passed that lesson on to us, it wasn’t because they wanted us to hate our bodies. It was because hating your body was, and is, a major part of being a woman in this culture.

Girls and young women learn much of how to be a woman from watching the women in their lives. When they see those women bemoaning a stomach that refuses to flatten or flagellating themselves when they step onto the scales, they learn that in order to be an adult woman, they too will have to hate their bodies, to constantly desire to be thinner or tanner or taller.

It is a mark of dangerous social dysfunction that 81 percent of American 10-year-olds and 46 percent of American nine-year-olds are dieting to lose weight. [http://www.nedic.ca/knowthefacts/statistics.shtml] I’d be willing to bet that a good portion of those third and fourth graders aren’t dieting because they really think that they’d be happier or healthier a few pounds lighter. They’re dieting for the same reason that they stumble around in their sisters’ high heels and smear their mothers’ lipsticks all over their young faces: because that’s what grown up girls do.

As the first and arguably most influential teacher a girl will ever have, mothers can be the first line of defense against negative body image. Laura Rubinstein, a health educator at Princeton University who specializes in eating disorders, tells mothers that by accepting their daughters’ bodies and teaching their daughters to do the same, they serve as a tiny but important drop in the bucket. “For every time you tell her that her body’s just fine the way it is, there are a hundred outside voices telling her otherwise,” Rubinstein says. “Even if you think she should lose weight, she doesn’t need to hear it from you. She’s already hearing it everywhere else.”

It’s hard for women to shield their daughters from attitudes and behaviors they themselves have so thoroughly internalized, and sometimes it doesn’t work. As Martin writes, “We see that our mothers cannot love their own bodies, and this translates… to a lesson about femaleness.” But Martin and Rubinstein have faith, and so do I, that even mothers who have been carefully taught to hate their own bodies can ensure that they don’t teach that lesson to a new generation. Instead, they can teach their daughters that being a woman is about more than a constant desire to be thinner or prettier. They can ensure that their daughters grow up knowing that no matter what they see on television or read, their bodies are fine the way they are, because Mom said so.