Do Not Pass Go

What, no one wants to play an eight-hour board game with fake money anymore? 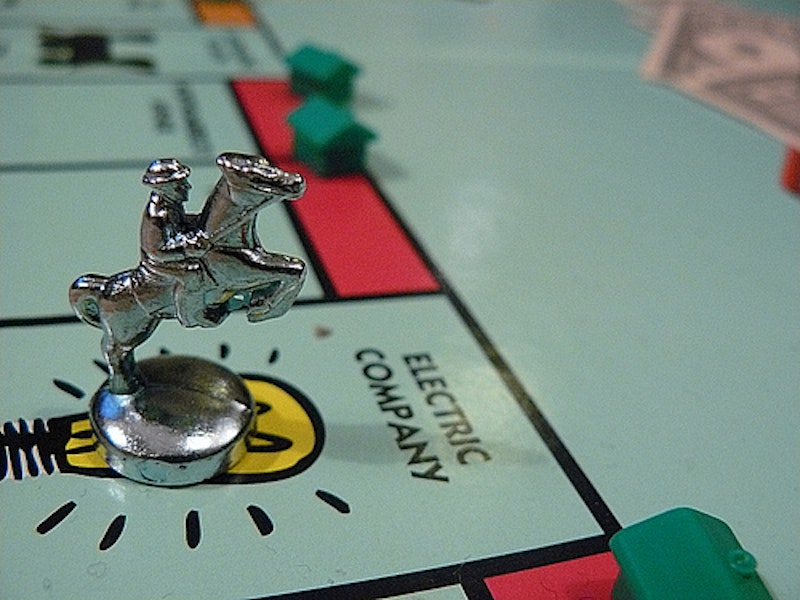 When my 14-year-old son and I spend time together watching Red Sox games on the tube, there’s an unwritten rule that conversation unrelated to baseball is forbidden, at least until the outcome, one way or the other, is clear. Last Friday night, when Boston’s Dice-K Matsuzaka stunk up Fenway Park from the very first pitch, leading us to think general manager Theo Epstein ought to take advantage of this year’s trend of placing non-performers on the disabled list because of “anxiety disorder” and remove the wealthy Japanese pitcher from the roster, we quickly drifted away from the game and moved on to other topics. (And, as it turned out over the weekend, Dice-K did go on the DL, although for “mild shoulder strain.”)

Anticipating our trip in early August to Bermuda, where one of my brothers and his family spend eight weeks each summer, Booker was full of beans, planning out the short vacation. “Okay,” he dictated, “first order of business will be a ping pong tournament, and this year I’m going to whip Quinn [one of his cousins] and Uncle Gary. Then we’ll have a hot dog-eating contest, take a break, play croquet and this year I won’t finish in last place. And on Sunday afternoon we’ll have a Monopoly marathon.” His enthusiasm was infectious, and even though I sort of rolled my eyes at the minute-to-minute schedule presented—without consultation from the rest of the two families—it was a lot more entertaining than the dreadful images taking place in Boston.

Trouble is, who plays Monopoly anymore? Certainly not my wife and older son, who grow bored with the slow pace—like almost everybody these days—and dislike the cut-throat competition and wheeling and dealing. And while my nephews Quinn and Rhys might, after some relentless goading, agree to a half-hearted hot dog contest, there’s just no way, even if it rained for four straight days, that they’d be pinned down with a board game. Monopoly, for those Americans under 21 who are even familiar with the onetime institution produced by Parker Bros. during FDR’s administration, is just not an option today, viewed as about as exciting as quilting, milking the cows, bird-watching or taking turns reading aloud favorite 19th century French poems.

My own Monopoly career is, risking immodesty, a very good one, and from the age of 10 or so, my winning percentage is about 60 percent. It’s not as if I have an affinity for such activities—never was a fan of Risk, so-so at Trivial Pursuit, a nightmare with Scrabble (the one and only time I defeated my wife at that infuriating game I snapped a picture of the completed board) and the British television character Inspector Morse would laugh at my ineptitude at crossword puzzles—but the ebb and flow of Monopoly has always captivated me. Maybe it’s the 10-hour marathons I’d be part of down in my neighbor Dicky Howard’s basement as a pre-teen, matching wits with Bobby Ringler, Robert Walton and Dave Cicale; we’d blow the better part of a spring vacation rolling (and rolling and rolling) the dice, trying to capture the coveted orange trio of properties—St. James Place, Tennessee Avenue and New York Avenue—which, in my estimation, is the key to winning. The biggest mistake in Monopoly, as any serious player knows, is to deplete your cash by buying glitzy properties like Boardwalk and Marvin Gardens; buy the cheap stuff, build houses and hotels as quickly as possible, and knock the neophytes out of the game.

We’d play at home occasionally in the 1960s, but my family didn’t have the same zeal. My oldest brother was starting a successful career in the financial industry and just had zero tolerance for a game that involved fake money. Which isn’t a bad point, when you think about it, but hobbies are peculiar. I was too busy in high school and college for the frivolity of Monopoly, preferring more enticing frivolities, but as a young graduate, cash-strapped and unable to afford much of anything, nothing was better than getting together a group of co-workers and friends on a weekend, with a load of low-rent beer (in the late 70s and early 80s, Pabst and Rolling Rock were dirt-cheap and hadn’t yet attained the distinction of yuppie status symbols), and playing Monopoly for hours on end in someone’s skunky, roach-filled Baltimore apartment.

It was a ruder version of the game I played as a youth, and wasn’t uncommon when someone, blitzed on Blatz, would take a look at his or her portfolio, say fuck it, and just turn the board over, effectively ending the game. And then we’d move on to poker, which could, and did, get far uglier if one of the participants was either the victim of very bad luck or just not a particularly smart player.

I’m still up for a game, on any weekend or holiday, but due to lack of interest on the home front, our Monopoly set is dusted off just twice a year: on Booker’s birthday and when my in-laws visit from Los Angeles. My wife’s dad, Rudy, is a sport and he’ll go along with any activity, but it’s Daisy who relishes the competition and remains in the hunt long after the others have given up. Now that Booker’s a teenager he’s no longer given mulligans or friendly advice (which was once offered grudgingly, since when I’m in the Monopoly zone, even eight-year-olds are fair targets), and so the three of us duke it out until there’s a winner or an impasse has been reached. Still, despite the zeal of my present-day competitors, and the energizing strategy and cajoling that takes place when it’s time to swap properties, I don’t think we’ve ever passed the four-hour mark. No skin off my nose, really, but it’s a (minor) shame that my son, so captivated by Monopoly, is unlikely to ever get the rush of dispatching a final opponent 10 hours after the first lap around the board.