How the British honors system dishonors us all. 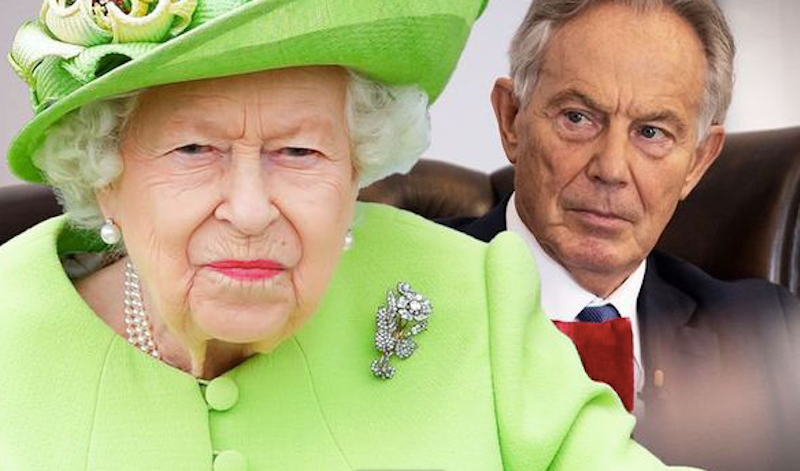 Tony Blair was raised a knight in the New Year’s honors list. And not just any old knight: a “Knight Companion of the Most Noble Order of the Garter,” the highest honor the British Crown has to give.

Unlike most honors, which are recommended to the Queen by the Prime Minister, the Order of the Garter is entirely in the monarch’s gift. It was founded in 1348 by Edward III and is dedicated to St. George, the patron saint of England. Aside from the regent herself, and the Prince of Wales, the order is limited to only 24 living members at any time.

The garter in question is an item of ladies’ apparel, used to keep their stockings up, but in this case worn by the knights around their left calf. It’s a buckled dark blue velvet strap, with the words Honi soit qui mal y pense in gold letters. The words are Middle French, the language of the aristocracy in the 14thcentury and mean "Shame on him who thinks evil of it."

There are several legendary accounts of the foundation of the order. The most well-known involves the Countess of Salisbury, whose garter slipped off during a dance, causing amusement among the assembled courtiers. The King saw it, picked it up and returned it to her reciting the famous motto.

The British establishment love this kind of fairy story. They love the fancy dress, the pomp and ceremony, the ritual displays of wealth and power, the reference to an ancient order of privilege whose origins lie in the mists of time. The Order of the Garter has its own dress code. Knights wear a velvet blue cloak lined with taffeta, with the crest of St. George sewn onto the left shoulder, a Tudor bonnet with white ostrich and black heron feathers, a collar made of gold and that sexy garter underneath to emphasize their manly calves.

The aristocracy can trace their origins to the brutal takeover of England by the Norman invaders in 1066, when they took the land by force and subjugated the population into a form of debt slavery known as serfdom. It’s this that “Sir Tony,” as we’re now obliged to call him, is celebrating with his new stature. He was already very rich, the wealthiest ex-Prime Minister in history, and now he has a title to go with it; this is despite the fact that he was once the leader of the Labour Party, a democratic socialist organization whose original purpose was to even out wealth and privilege, to make us a more equal society.

Most ex-Prime Ministers become knights in the end: the puzzle is why it took Blair 14 years to accomplish, and why the extra level of knighthood represented by the Order of the Garter? Maybe it has to do with his record, particularly in relation to the war in Iraq. It’s this that marks his premiership, more than anything else.

No one knows how many Iraqis died because of the war. Hundreds of thousands, perhaps more than a million. Millions more were driven from their homes. There was never any evidence that Al Qaeda had any presence in Iraq before the war, but they certainly did after, eventually mutating into an organization that even Al Qaeda considered extreme: ISIS, also known as Islamic State. Blair was warned about this possibility. Jeremy Corbyn, one of his successors as leader of the Labour Party, saidat the time that the war would “set off a spiral of conflict, of hate, of misery, of desperation, that will fuel the wars, the conflict, the terrorism, the depression and the misery of future generations.” If Corbyn knew that, as a mere backbencher, then Blair must’ve also known. His security services were warning him but, having already agreedto the war in advance, he was obliged to send our troops in beside the Americans, to help provide the fiction that the war had international recognition.

We know now that Blair lied. According to the Chilcot reporthe was “not straight with the nation.” He claimed that Saddam Hussein could have weapons of mass destruction (WMDs) ready for use within 45 minutes. It turned out he didn’t have the capacity to deploy WMDs on the battlefield and didn’t have the WMDs in the first place. He’d destroyed them as was his obligation under UN mandate.

WMDs were just the excuse. Iraq had nothing to do with 9/11, nothing to do with Al Qaeda, nothing to do with Islamic terrorism, but it did have huge reserves of oil, which is what the oil men in the US government were really after. Blair served his purpose as the front man for all this. He was slick, charismatic and eloquent, and committed to sealing his future as the spokesman for the New World Order.

He’s ruthless and without mercy when it comes to opposition. The story goes that he’s friendly to people’s faces, but that he’ll use someone else to stab them in the back if they don’t meet his approval. People who get in his way tend to get removed. Millions of deaths can be attributed to his ambitions, not only in Iraq, but throughout the Middle East and the wider world.

Blair’s is a toxic brand. The British people loath him. There’s a petition calling on the Queen to rescind his knighthood. It has already gained over a million signatures and may get to 1.5 million in the next week. It’s been my sport to click on the link and watch the numbers as they tick upwards.

The war in Iraq was unequivocally illegal, as it took place without a second resolution or a mandate from the United Nations. Blair lied to parliament to ensure that it went ahead anyway. That makes him a war criminal. Britain’s already one of the most corrupt countries in the world. The system of off-shore savings by the very wealthy is perpetrated through Britain’s Crown dependencies and overseas territories, laundered through the City of London. Billions are held in property in London by mafia elites and oligarchs from corrupt regimes around the world. The City of London lies at the heart of the international organization of money laundering and tax avoidance, while the UK is one of the pillars of the arm’s trade.

The British establishment likes to dress up in velvet and feathers in a fancy dress parade, but that can’t hide the viciousness that underlies all this pomp and pageantry. Blair's ascension to a knighthood is only the latest example of just how vile and corrupt the system really is.