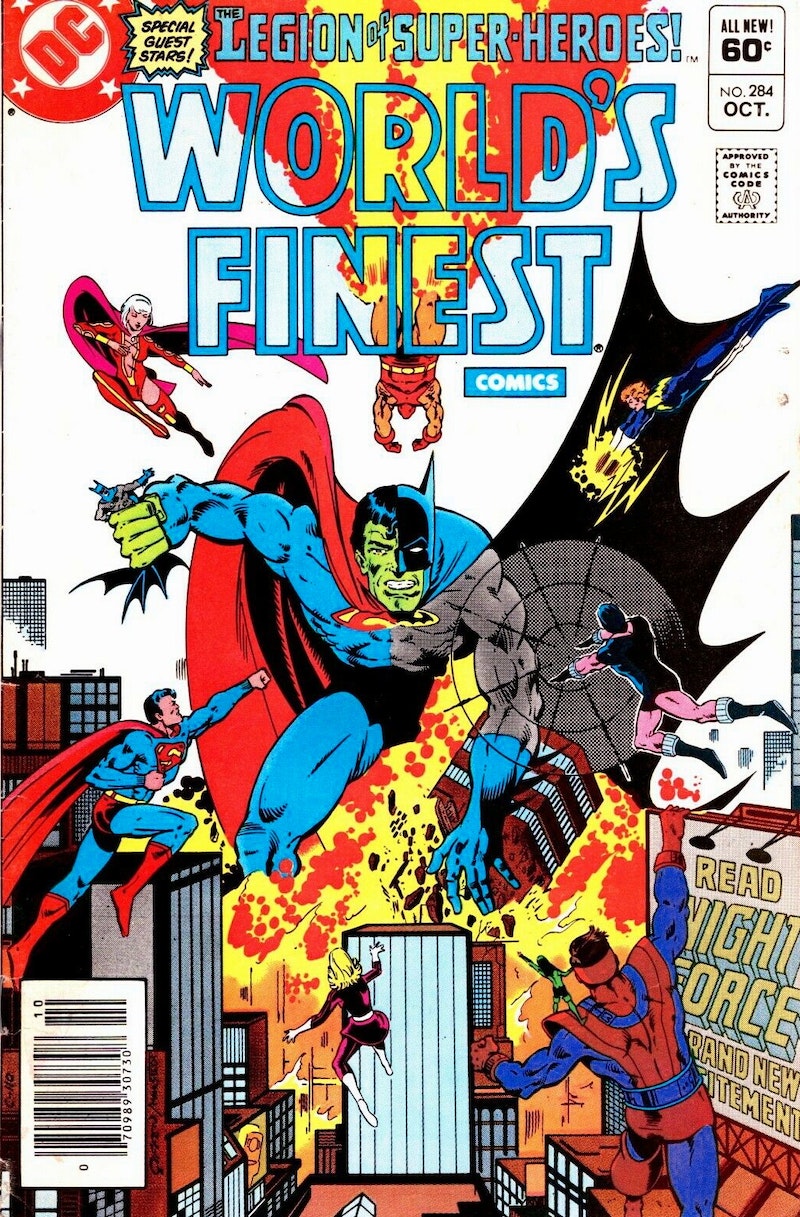 In Greek mythology transitions, duality, and beginnings are controlled by the god Janus. Despite his ancient legacy, today Janus survives mainly as the inspiration for an insult denoting hypocrisy. The term “two-faced” is a reference to Janus’ physical depiction in classical art—a head with a smiling face on one side and a frowning face on the other. As the insult “two-faced” rose in popularity, its association with Janus’ complex mythological purpose was gradually overshadowed.

Starting in the 1940s, DC Comics introduced a series of bizarre villains who mentally and physically brandished the negative qualities of the two-faced. Each one of these hid heroic or harmless identities behind an alter ego that thrived on sadistic terror and malevolence. In many cases the harmless alter ego was aware of and morally offended by its counterpart, a realization that often led the two polarized halves to clash.

Robert Louis Stevenson’s Strange Case Of Dr Jekyll & Mr Hyde was sometimes just as paramount as the Janus myths in defining DC’s two-faced characters. The publisher’s most notable homage to Jekyll & Hyde was a menace simply called Two-Face. Batman creators Bob Kane and Bill Finger debuted the villain in Detective Comics no. 66 (August 1942). Two-Face’s alter ego was the clean-cut, respectable district attorney Harvey Dent. After half of his face is disfigured by a convicted mobster’s acid attack, Dent decides that “fighting the good fight” in the name of justice doesn’t always pay off. Depressed by the disfigurement, his mind unravels. From day to day he changes his moral allegiance by flipping a coin—if it lands on “tails” he follows the ways of benevolence; when it lands on “heads” his criminal side is unleashed. The erudite lawyer then disappears and a grotesque snarling psycho takes over.

Dent’s fate-mania is at the center of most Batman stories that feature him, but it’s rare that any of those stories portray the mental illness with empathy. That wouldn’t be seen until 1989 when writer Mark Verheiden, and artists Pat Broderick and Dick Giordano re-told the story of Two-Face’s first appearance in Secret Origins Special no. 1. Several passages explore the schizoid justice warrior’s internal monologue and the distorted philosophies that create his instability: “The only absolute stays hidden like some glittering snake, waiting in mirrored silence for the opportunity to strike…”

In the 1960s, writer Edmond Hamilton and artist Curt Swan introduced the absurd two-faced character The Composite Superman. Half of his body appears as a green-skinned Superman while the other appears as a green-skinned Batman. Failed daredevil/disgruntled janitor Jospeh Meach becomes The Composite Superman after he’s struck by a bolt of cosmic lightning which gives him the bizarre appearance and combined superpowers of Superman, Batman, and the entire Legion Of Super Heroes.

Next to Two-Face, this was DC’s second most popular schizo-villain. Three different alter egos have been tied to The Composite Superman: Meach, vengeful alien outcast Xan, and thanatophobic mad scientist Professor Ivo. The most fascinating is Joseph Meach, who made his debut in World’s Finest Comics 142 (June 1964). Meach’s story arc is far more dynamic than those of newer Composite Supermen. He starts off as a clear villain possessed by jealousy and fascistic ambition. Eventually the lightning strike’s effect starts to wear off causing his superhuman powers to wane. Meach’s empathy then becomes stronger, leading him to sacrifice his life to save the lives of his enemies Batman, Robin, and Superman from a murder attempt made by the future Composite Superman Xan (in World’s Finest 168, August 1967). Fervent anti-objectivism charges this moment as all-encompassing power becomes a toxic influence while vulnerability and selflessness save the day.

A few years before the first appearance of Composite Superman, DC introduced Eclipso, a split-personality nicknamed the “Hero and Villain in one man.” This mystical being was inspired by folk horror, astrology, and pulpy jungle adventure stories. In the 1970s DC debuted the obscure character Kobra, a megalomaniacal cult leader telepathically linked with his benevolent twin brother. While both Kobra and Eclipso confronted the same moral issues as their counterparts, they had no recurring arch enemies other than their own alter egos. DC’s explosive schizoid narrative hit its peak within the pages of Kobra (1976-1977) and the early-1960s issues of House Of Secrets that starred Eclipso. Identity and the unknown, empathy and cruelty, apathy and awareness were turned inside-out/upside-down as these characters relentlessly battled themselves. In the process their series pushed the concepts behind Two-Face and Composite Superman into a whole new dimension of moral complexity.