Is Justin Bieber Washed Up? 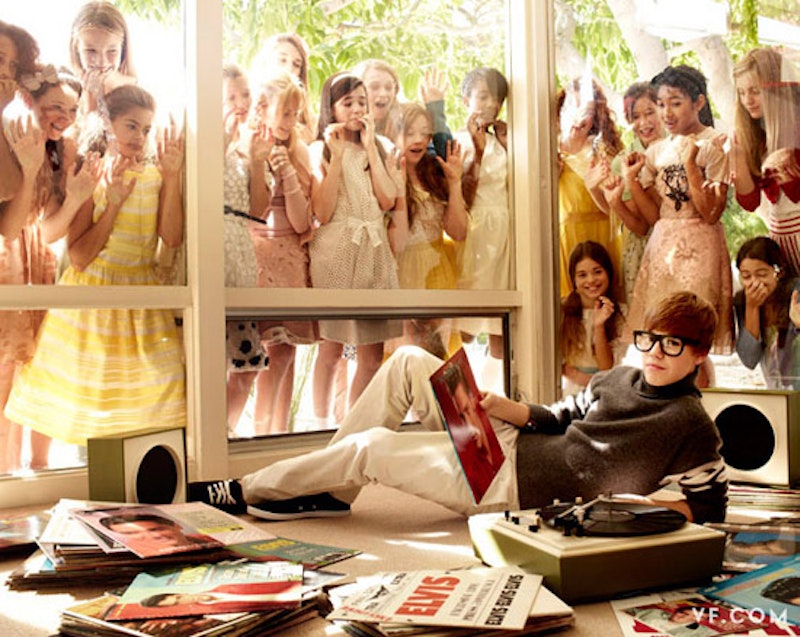 Big news shook the publishing world yesterday. No, not the verdict in the Casey Anthony trial, but a report that Vanity Fair’s February issue, with Justin Bieber on the cover, was its worst-selling issue since 1999.

According to a WWD article, the February VF—featuring a photo of the tween dream with lipstick all over his neck and shirt, and captioned “Is This the Adorable, Inescapable Face of 2011?”—sold 246,000 copies, per the Audit Bureau of Circulations’ Rapid Report, making it the magazine’s worst seller since Will Smith’s July ’99 cover pushing the timeless classic Wild, Wild West. That one managed just 202,701 copies at the newsstand. A July 1993 issue featuring Harrison Ford—who, like Smith, was at the time the world’s biggest movie star but had nothing of interest to say—moved around 243,000 copies, and still holds the record as VF’s worst-seller since Graydon Carter came on board as editor in chief in 1992.

But we’re not here to examine the supermarket line drawing power of the stars of what are almost certain to be soul-deadening efforts like Men in Black III and Cowboys and Aliens; we’re here to find out if the preternaturally long reign of Vinny Bieberino has finally come to an end. (As to whether his face is “inescapable,” the answer appears to be “No.”)

I’ve got nothing against the guy. Since I long ago gave up on pop radio and am the father of a boy who’s under the age of 10, I’m not inundated with Bieberish ballads all day. No remixes of “Eenie Meenie” or DVDs of Never Say Never or CDs of My World, My World 2.0, My World and Welcome To It, or My World Never Says Never, Ever to stumble over in the wee hours of the morning.
Still, you’d have to have been living in a cave not to be aware of the cherubic Canuck’s ubiquity in daily life, whether he’s causing stampedes at malls here and abroad or caught canoodling with Selena Gomez, who finally distinguished herself in my mind from Demi Lovato by being the Disney brat who didn’t go to rehab. (At least not yet.)

Nevertheless, finding out that VF’s non-subscribing readers didn’t scarf up the Beebs by the bucketload isn’t necessarily all that surprising; after all, they’ve gotten so used to a steady diet of Marilyn Monroe and the Kennedys that seeing anyone on the front of the book who hasn’t been dead for 40 years is bound to be a shock. (Lest anyone panic, the Bieber issue did include “The Kennedy Inauguration: JFK, Sinatra and the 1961 Bash That Launched Camelot.” Whew.)

But the WWD piece also notes that Bieber’s October 2010 Teen Vogue cover fell about 12 percent below that title’s 2010 average, while People’s “All About Justin Bieber” keepsake was its third-worst seller of the year, at about 25 percent below the average. Wenner Media also danced out on its customary edge and put him on the covers of both US Weekly and Rolling Stone, but sales figures haven’t been released yet.

So what’s up with the babes in Bieberland? Has the inevitable decline in popularity truly begun? Has young JB started to grow less cute, albeit on such an infinitesimal level that only high-powered microscopes and girls aged 8-13 can detect it? Will he eventually be joining the now-wizened stars of The Suite Life of Zack and Cody, or soon be making Syfy tripe alongside teen stars of yesteryear like Debbie Gibson and Tiffany?