...then he'll probably end up with a great career, anyway. 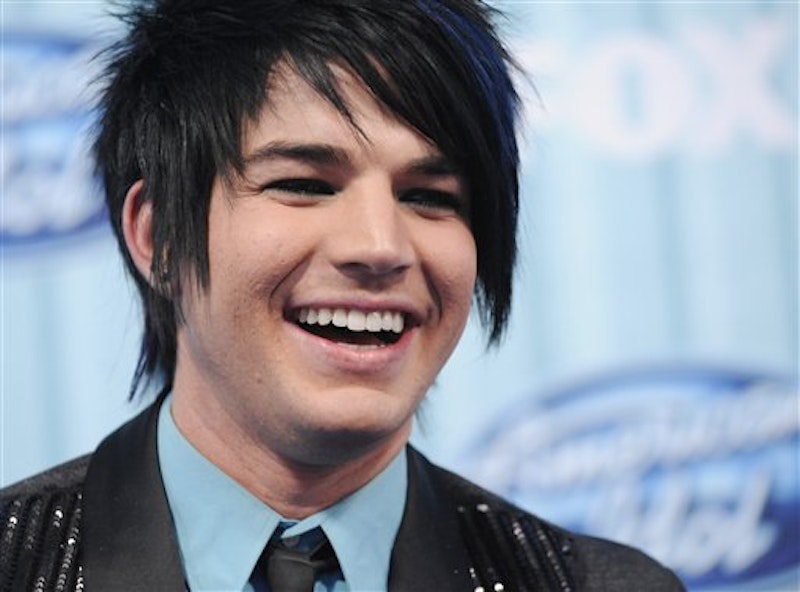 If the stars and stripes align, tonight Adam Lambert could be crowned the next American Idol. Suck it, Anderson! America is about to have a new “top” bottom!

Adam Lambert has been the talk of Idol chatter virtually since he made his first gay face on national television. Why? Well for one, the hoe bag can really sing. It’s like Elvis mixed with a splash of Steven Tyler. Glam rock on speed. Reliably, the Gay Glitterati pounced all over Adam, saying how sexy it is to have a gay as a front runner for Idol—even though no one has yet produced a screen grab of his Manhunt profile. In one of my favorite TMZ videos, the paparazzi catch Adam out with his posse in L.A., and the paparazzo runs up to Adam and is all “Adam if you win, you’ll be America’s first...” and then Adam is just sarcastically like “America’s first what? (insert 'what U gonna say now' face).”

So he likes dudes, what’s the big deal? He can sing, so should stand a chance at winning, right? Ha! Not if The Evangelical Christian Militia has its way. These bitches (read: Bill O’Reilly and Friends) keep talking about how Adam’s “sexuality” will be the deciding factor between the final two contestants. The story they’re cooking up goes like this: Adam Lambert can’t possibly be the next Idol because he worships cock, an abomination before The Lord and Savior Jesus Christ. Kris Allen, his competitor, is a good country boy from the Red State of Arkansas. He’s cute, cuddly, married and Christian. He’s also BOOOOOOOOOOOOOOORING. See where I’m going with this? It’s obvious that Adam and Kris are polar opposites vocally. The glam rocker versus the acoustic rocker. I guess it just pisses me off that peeps are turning this singing competition into a competition between a gay bottom and a Christian top.

Obviously, I’m for the queer. Gotta stay true to The Gay. But that doesn’t mean I’m beating up on Kris Allen. That dude is definitely talented. I love that he put his entire ball sack on the table last week with his sultry, acoustic rendition of Kanye West’s “Heartless.” That performance was so sexy that I even posted the video to my Facebook page, and to this day I’m still listening to it.

Last night’s final competition was great for Kris. He did two acoustic numbers, and they were really electrifying. The judges are always talking about how they already know what kind of artist “Kris Allen” would be, and they’re totally right. Boring though he may be, I think he’s right up there with José Gonzalez, Jason Mraz and on and on. And there’s a huge market for that stuff.    Adam Lambert, on the other hand, didn’t have a sexy night. His first two performances were just okay for me. But Paula thought they were so great that at one point her crazy, overly tan ass (in that way too lime-green hot mess she wore) got up and air-lassoed to praise Adam.

The great thing about Adam is that he could sing the telephone book and still be a great artist. I gotta say, though, that I’m really worried for him. I know he’s been the frontrunner all this time, and Kristian Kris has been the underdog. But I seriously don’t think Adam Lambert is going to win—not because he’s a gay, but because he’s too much for the average American viewer. He’s too stimulating, too different. Kris is perfect for pop music because he’s calm and sedate. And in order to survive, pop music needs to be boring, refined, the same all the time in order for The People to understand it. That’s the safe voice Kris Allen represents. Adam, on the other hand, is something explosive for Pop music, a newness that in many ways is a return to 80s glam rock. But do you think America is really ready for that kind of fierceness?

Call me cynical, but I hope Adam Lambert loses. He’s so much better than Idol. Forget the American Public and The Evangelical Christian Militia and The Gay Face haters and the $1 million and all that. The dude is ultra gifted and deserves to be received where he is welcome. Give it to Kristian Kris, who will sell very well. But just because you win Idol doesn’t mean you’ll be a mainstay in music. Ruben Studdard and Fantasia Barrino, though gifted in their respective pulpits, are two of the steamiest, hottest messes to emerge from Idol. But as history has shown, the loser always comes out, um, on top. Chris Daughtry? Award-winning rock band. Jennifer Hudson? Oscar. Adam Lambert? Pop-icon.