Even in 2008, people are still expected to fit snugly in to easy classifications, which is why genre- and style-crossing artists like Santogold are more important than ever. 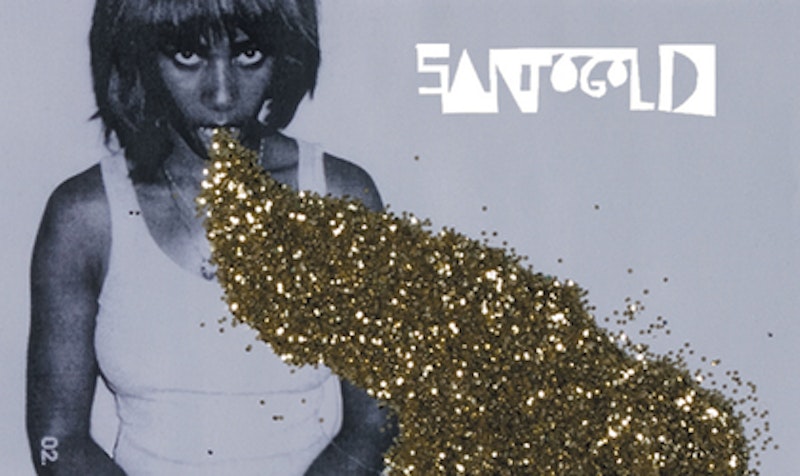 I’m dying of boredom at a first-year graduate student reception until this super hot guy asks to see my iPhone. He’s not my usual type, but he’s friendly and hot so I talk. We don’t really have anything to say except the stupid “where are you from” and “what are you working on?” questions that always bore me to tears. Don’t grad students have anything else to talk about? Anyway. When I show him my iPhone, he’s asking for the iPod playlist so he can see what kind of music I listen to. And I’m bracing myself for the following response, which has been repeated to me over a billion times:

“Patrick Wolf...Yeasayer…Vampire Weekend…Bloc Party…M.I.A… I’ve never heard of any of these people. You got any R&B? Soul? Some Hip-Hop?”

Translation: You black. WHERE YO’ BLACK MUSIC?

“Well, I do love me some Beyonce. Bitch knows how to work that hair on stage, okaaay!” That’s how I respond. But I don’t think that’s what he wanted me to say. So: Why is it that people expect black people to listen to black music?

I’m not sure if people know this, but it’s perfectly okay to be difficult to classify. You can be a homosexualist and not go to gay clubs. You can be a straight woman who wears boy’s clothes. You can be a male, straight or otherwise, who wears tight pants. And, believe it or not, you can also be black and not listen to black music.

I’ll never forget the time I was talking to a girl and in the course of our conversation she actually asked if I was adopted. “It’s just that…you’re not like any of my black friends, or any of the other black people I know,” she said. Can you believe it?  I almost punched her out, but I didn’t want to ruin my outfit.

Growing up, I always got a ton of shit for being difficult to classify. We all did, right?  “These people don’t understand me, and they will all pay when I’m a superstar.” That’s what I sneered at on-lookers. How do you learn to fit in your own skin if peeps are constantly making fun of you, you know?

That’s why my teenage idols were never the hot guys that I peeled out of the pages of Tiger Beat (that were for a more…um…carnal pleasure) but out-of-the-box musicians like Lenny Kravitz and Steven Tyler.  I mean, of course I recognized that Kravitz was an attractive male, but my fascination with him and Tyler was more about the way these two super straight guys could be difficult to classify and still have women fawn over them.

I was like, “Ok, Lenny! You better wear that pink floral blouse, those tight zebra pants and them platform high-heels! And Steven, I see you over there with that long purple silk scarf all tied up around your neck! Fierce!”

Fast forward to the present. Earlier this year, a new musician came out and completely rocked my world. Her name is Santogold, and she is glorious. I remember seeing her CD when it was first displayed at Manhattan’s Virgin Megastore in Union Square. The CD is a purplish blue and has Santogold on it with these like gold specs coming out of her mouth. When I saw it I was all, “Now who is black chick spewin’ fuckin’ glitter outta her mouth? Let me listen to that shit.”

Fresh. Unexpected. New. Not R&B or hip-hop. She became my best friend right away when I saw pictures of her wearing fuchsia lipstick and blue eye shadow, these humongous nerdy glasses from the 1950s and an awful vintage blue dress. And she had my heart when I read that she dismissed any effort to classify her sound as R&B or hip-hop as racist. In an interview with The Lipster she said:  “It’s racist. It’s totally racist. Everyone is just so shocked that I don’t like R&B. Why does R&B keep coming into my interviews? It’s pissing me off.”

Yes! Finally, a black girl whose music and image isn’t about ass. Finally, a black female singer who isn’t anything like Ciara, Ashanti, or insert-exotic-sounding-first-name-here. And the fact that she went to Wesleyan and majored in African-American Studies somehow validates her whole gig.

Anyway. I guess I see a lot of myself in Santogold, Lenny Kravitz and Steven Tyler. I mean, who doesn’t want to wear big gold earrings, tiger print pants, a neon green fanny pack and a white t-shirt with graffiti on it and still be taken seriously? More often than not, it seems like there’s no place for black people who are interested in punk/indie culture. A lot of black people will write you off as a “sell-out,” and others count you in as the black person that’s unlike the other black people they know.

In reality, it’s about understanding the limits of race and any other identity category. You gotta push the limits and get people to think about things they’d normally take for granted like race and shit. So whenever people discover that I don’t listen to “black” music, maybe they’ll stand in a corner, have a “time-out,” and think a little harder about what “black” means to them.