I Am a New Republic Pundit, Hear Me Roar! Please? 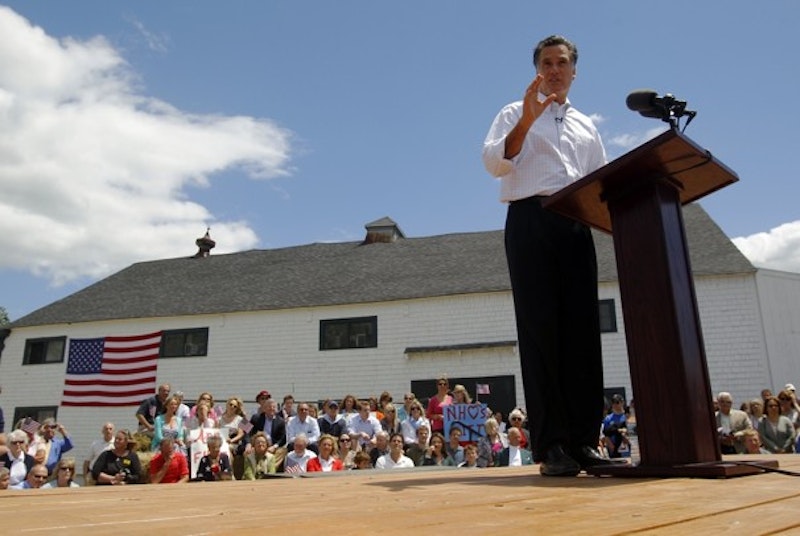 If you choose to believe Romney’s nomination was determined long ago by a shadowy GOP Establishment that Republican voters follow like sheep, or that conservatives are setting aside their ideology in deference to Mitt’s superior “electability,” or that the party’s “base” understands they must “move to the center” to win close general elections—well, be my guest. But for my part, I think it’s reasonably clear that Romney’s nomination, if it indeed occurs, will be mainly attributable to a demolition derby similar to, and perhaps even weirder than, the one that haphazardly produced John McCain’s nomination in 2008. Romney’s own nomination may now be approaching inevitability, but let’s not forget that it was once very much preventable.
Kilgore then goes on to list all the ups and downs of the presidential race thus far. Remember T-Paw flaming out! Remember Herman Cain flaming out! Remember Rick Perry flaming out! Who could have guessed that they'd all run out of money or suddenly sprout a gaggle of mistresses or reveal themselves to be as dumb as a bag of rocks? No one could have known it, which means that people who said they knew it were wrong and so everyone who thought Romney would be in front was right for the wrong reasons. Whereas Kilgore was wrong for the right reasons and deserves whatever The New Republic pays him to write columns covering the campaign and/or to write columns gratuitously justifying what they pay him to cover the campaign.

I don't claim to have any great political insight myself, but it seems to me that Kilgore's tour of the trees is deliberately intended to make sure no one sees the forest. Most pundits thought Romney was likely to do well because he had a lot of establishment support, a lot of money (which is directly related to establishment support) and because he'd gone through a campaign cycle already and had not completely embarrassed himself. It's true, as Kilgore says, that these factors would not have been nearly as impressive if Romney had to have a rematch with the also-battle-hardened Mike Huckabee, or with institutional bona fides like Jeb Bush, Mitch Daniels or John Thune had gotten into the game. But that's why Romney's front-runner status wasn't cemented until everyone actually knew whom he was running against. Once we all got a look at the field, it seemed clear that Romney was the man to beat.

And he was the man to beat for exactly the reasons he's turned out to be the man to beat. Not because he's likable (he isn't) or trustworthy (debatable) or because evangelicals adore him (which they don't) but because he's got establishment support and money and the national media has already vetted him. His opponents, as a group, lacked institutional support and money and no one was sure whether they were ready for prime time. Therefore, most political burblers, amateur or professional, figured that Romney was the likely victor. And, sure enough, as his opponents ran out of money (Pawlenty) or were devoured by the establishment (Gingrich) or proved to have various objectionable items in their closets (Cain or Paul), everybody had to acknowledge that the conventional wisdom was pretty much on target.