How to Sell Your Soul to Corporate America

Some graduates are taking this whole "entering society" thing a little lighter than others. 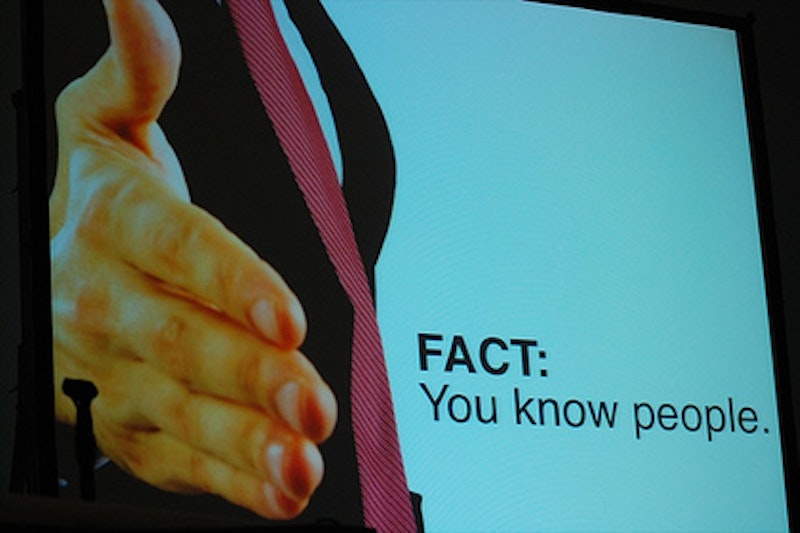 I recently witnessed my father purchase a BMW convertible from a sexy little automobile barista for a cool $55 grand. Before this transaction he touched the gray out of his hair and picked up a mistress. A clichéd mid-life crisis. Mom hit menopause about three weeks ago, and his job is about to go half way to nowhere. I don't really blame him. It seems sort of walking Id, but in the right way.

But his crisis sheds light on my own. I recently accepted a sweetish position at a prestigious consulting firm, where I tell a bunch of government employees what to do despite lacking the slightest bit of experience. I gained this distinction because of a degree from a well-to-do university that US News and World today digs as "a serene, tree-lined 140-acre campus next to the eclectic north end" of a morally bankrupt city of sin. AIDS-ridden and shit. Seriously.

I am told that I am lucky. I’ve got dental and a job with benefits and a very decent salary, so good for me. But I don't see the endgame. Qui bono, right?

Let me let you in to what it took to get me into this twentysomething, reality check that closely resembles receiving a swift testicle kick. I had to get my love to dump me. That proved fairly easy. I just had to loosely lose my respect for her and her path. Think less and less of her. Question her commitment to me. Ask her to hit the gym. Venture into the liberal sodomy sex stuff when I got bored with the standard, missionary, lights-off sex.

I gave up my idealistic venture of writing and romantic dreams of novelistic grandeur; difference-making through the words; fame, fortune; selling my pair of man bits for a depressing wardrobe of one navy, one black, one gray, and a couple of stylish pin-striped suits. This tenuous trade-off unquestionably led to a SUV, new IBM laptop computer, and an inescapable series of PowerPoint training sessions.

I delved head-deep into a cocaine routine that seems quite controllable and yuppie. A steady chewing tobacco regiment that spares my lungs and allows me to keep up with yoga and sends my pancreas spinning, aching from a possible uncontrollable cellular growth. But I can run five miles, get new ass, and maintain a slightly higher-than-average sex appeal. The salary doesn't hurt that either. It amazes me how much women love dental insurance.

I gave up listening to new music and reading Hemingway for an iTunes playlist of Pearl Jam's "Nothingman" and the entire Nevermind album. Ray Charles and Warren Zevon make appearances. So do the Counting Crows, Hootie and the Blowfish, and Jason Mraz—weird.

I fantasize about banging my roommate's girlfriend. They don't fuck or have the sex. They make love and wash each other's dishes after dinners, but she has great tits. Magically perfect, but I've never seen them.

I wonder if the topless car will save my father. I wonder if the Skoal will save me. I won't get back together with that girl that I loved, and that's okay for now, but the fact that the emotional mercy lay never came to fruition still bothers me.

This seems to be a violent reaction to the uncontrollable force that defines change. I think a hollow feeling lives in my father's gut. A knowledge that the finite number of days he has to drive fast and fuck dirty are fewer than they are many. Just as The Man traded my number of drunken evenings and delusions of invincibility for conference calls and the growing reality of responsibility, I reach back and try to hold on to what I know, even though it doesn't even feel good or right.

This is what I've learned thus far:

1. I won't steal your girlfriend from you, but I will clean up your mess when she cries on my arm, so don't get mad about it.

2. When I clean that shit up, do me a favor make sure that she shaves. I hate the pubis when I head to the Southland.

3. But I guess the larger question bears asking: Why, if I see this inevitable demise for all of us in our early 20s, can't you? Leaving me to clean up your problems, and you mad as hell?

I'm a little under-the-weather and challenge Oprah to commission me for the Book Club. I'd rock that shit.