German fantasizes about the globe, sings about utopian world, no one afraid. 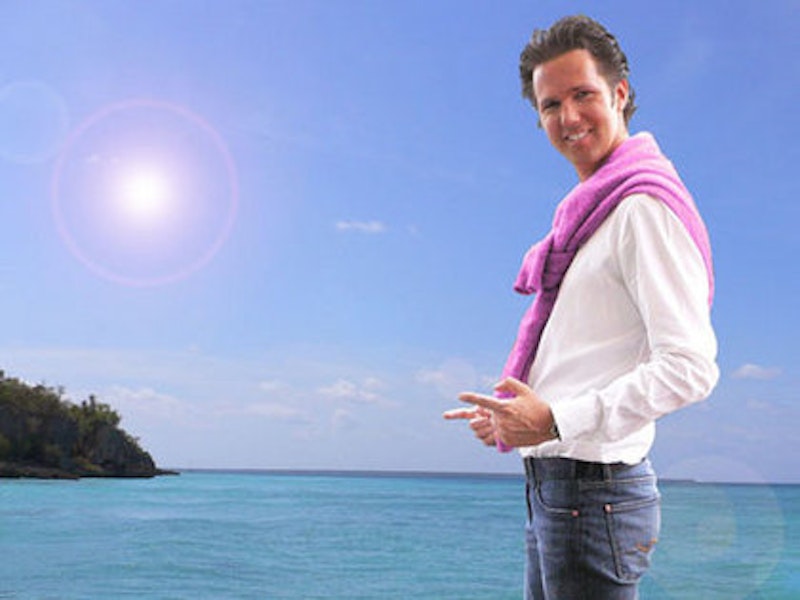 Germans aren’t portrayed as funny. They are shown at best as weird, and, if laughter-inducing, then for their part unintentionally so—it is plain to see, from this skit on Conan O’Brien, to the two obviously Teutonic extra-terrestrials in Dude, Where’s My Car? (Yes, I saw Dude, Where’s My Car?). Well, Alexander Marcus is certainly also weird, but above all, he is definitely funny. Out of Berlin he comes with freaky dance moves and a mysterious globe in his hand.

Marcus is a parody both of modern (especially European) club and house music and of “Deutsche Schlager” (translated: “German hits”) singers of the late 1950s, 60s and into the 70s, like Freddy Quinn, Udo Jürgens and Roy Black. If you don’t know them, the American analogue would be the corny, pathos-laden crooners of the same era, from Burt Bacharach to Tom Jones to the Rat Pack. The guys with the fake-looking tans, sparkling whites and slick hairdos, who looked a bit like child molesters, yet somehow were tacitly deemed good old, nuclear-family kind of guys. The golden oldies.

Marcus mixes this lounge-room braggadocio with a creepy, always-smiling, Raffi-like poise, and the result makes me feel a little like I just got sexually harassed. In respect to the actual music, Marcus throws completely used-up melodies over electro-beats, synthesizers and crackpot YouTube videos, and the result is a shitty yet entertainingly ironic layer cake.  But his music itself is really not important beyond its role in the image his YouTube videos create. Serious composition is not the idea here.  In “1,2,3”, Marcus mocks the folksy patriotism of Deutsche Schlager singers, singing about the geography of the fatherland over silly dance beats:

With so much of “post-irony” electro, however, even the most sarcasm-savvy of individuals find themselves asking how much of it is actually satire. Are these guys actually using exaggerated, wink-wink satire to disguise a hidden truth (think, for instance, the cover of Chromeo’s album Fancy Footwork)? If so, that truth is clear: hidden in the ridicule is actually a love for the caked-on glamour and unabashed frilliness—a love for Earth, Wind & Fire and “Let’s Groove,” and for Parliament/Funkadelic doing their over-the-top glitz and perverse, schoolyard verse about “nappy dugouts.”

With Alexander Marcus these questions and this potential hidden truth are as salient as ever. The lampooning of all things disco/club, techno, electro and house is definitely there for his audience to pick up on, but the guy never lifts his oh-so-svelte, Miami-club- buffoon character. During all live performances, and in interviews or during press events, he remains an utter screwball, actually carrying that globe from his videos around with him everywhere he goes. This leads sometimes to the fleeting feeling that he might just really be the freak he portrays. This next video captures the blurriness of that line, as the “caricature” Marcus and the “real” Marcus are shown together, but there is ultimately no difference between them.

But maybe the confusion about Alexander Marcus’ true identity is all for the better: Marcus is the caricature, and this extends his mockery. In the U.S. we have groups like The Dyslexic Speedreaders, and we are used to “Bollinger-party” electro and club music so drowned in flash and flamboyance, we have to know it is intended as an unserious send-up of R. Kelly one-man, mega-drama operas, P-Diddy “white party” excesses and the like. However, with recent videos like this one from Italian DJ-group The Bloody Beetroots (which comes across at times more like a porno than a music video), it seems that in the European club/house/electro/dance/techno/whatever scene, there are those who seriously want to take over where groupie-laden rock stars left off, rather than make fun of their past extremes. On top of that, Germans are known, if somewhat stereotypically, for their own part in founding the über-intense club scene, with Kraftwerk, Krautrock and the “Neue Deutsche Welle.” Dance-til-I-bleed German club music is also parodied in the above Conan O’Brien skit.

So I am glad then that there are completely whacked-out dudes like Alexander Marcus out there, even if his music is indisputably complete shit. Even if he does bring on laughter as much as he brings on slight nausea and the question, “What the fuck?” By becoming the caricature he has created, he takes the tongue-in-cheek to the next level, and in the process becomes no longer just a reaction to the “Deutsche Schlager,” the “Neue Deutsche Welle,” or club-life groups like The Bloody Beetroots.  He becomes his own species, like some strange cross breed in the zoo, or some creature out of the Barnum & Bailey traveling freak show. You don’t necessarily have to understand the scenes that Alexander Marcus is mocking (you don’t even really have to understand German) to find him funny and addictively oddball.