How to Not Be an Asshole Tourist 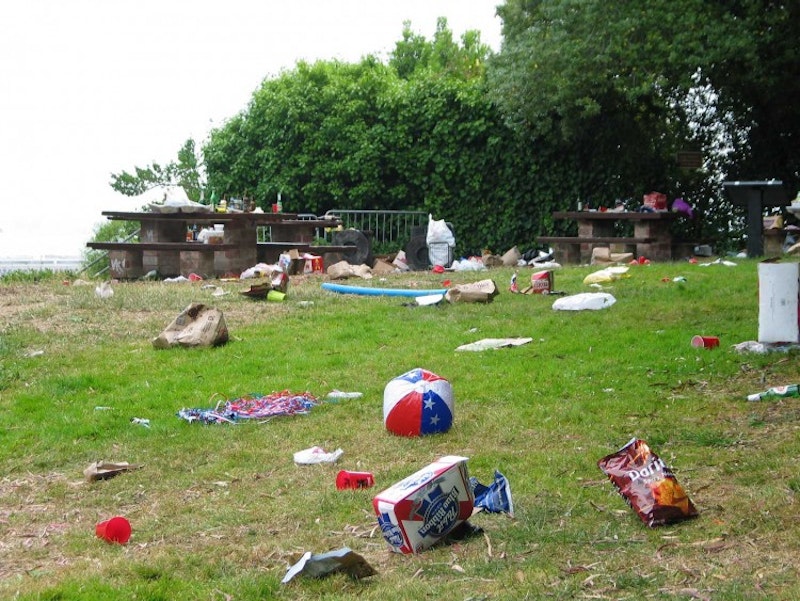 I’ve lived most of my life in tourist areas: Hawaii, California, New Orleans and outside two national parks. The lesson learned from places as diverse as Waikiki, the French Quarter, and the Great Smoky Mountains is that tourists are assholes. Or, in fairness, tourists are more likely to be assholes than their non-travelling brethren.

Take as evidence the following observations of a resident of three vacation destinations:

One: Every morning, crews hose down Bourbon St. in the French Quarter of New Orleans. They cover the pavement and sidewalks with soapy water, washing away all evidence of the last night’s activities. Before the bars open and any of the tourists who left the spilled beer and daiquiris, crushed and lipstick-smeared cigarettes, and streaks of half-dried vomit manage to stumble out of bed the streets will again be washed, ready, waiting for them and their money.

Two: Once a week, a county worker drives a tractor across Waikiki Beach at night, pulling a filtering machine that sucks up all the cigarette butts and napkins, hotel towels and condoms, and whatever else the previous week’s beachgoers left behind. He does this, so far as I’ve seen, sometime between midnight and two a.m., probably to avoid sucking too many children into the machine.

Three: Rangers at the Great Smoky Mountains National Park have a term for the special kind of road-closing, traffic-snarling events that happen virtually every weekend: bear jams. A bear jam occurs when one or more of the park’s thousands of black bears decides to hang out within view of one of the several highways running through the park, and the tourists driving past it form a miles- and hours-long line in both directions, taking turns to stop on the highway, snap a picture or two, then drive on. The last time I was stuck in a bear jam, the bear was up in a tree right next to a pull-out, which was of course empty, as the drivers were too busy taking pictures to get off the highway. So my fiancée and I sat in our car, watching the minivan full of excited kids and even more excited adults in front of us pile out of the car, run across the double-yellow line and start taking pictures, while we were waiting, idling under the green forest canopy.

For those interested in not being an asshole while on vacation, I’ve collected a couple simple rules that are successfully followed by thousands upon thousands of tourists every day:

One: If you drop, spill, or vomit while on vacation, behave as if you’d dropped, spilled, or vomited on something in your own home.

Two: If you bring cigarettes, napkins, beach towels or condoms to a beach, do with them what you would do if you’d brought them to your living room.

Three: If you’re driving in a national park, even if you know the people behind you are not your neighbors, drive as if you’ll have to see them every day.

Years of observation has taught me there’s something about the way we behave when we know we’re not going to spend much time in a place, especially when we’re paying for it. It’s the nature of tourism that changes our perceived responsibilities as humans, and the problem isn’t just with tourists. Tourist industries are complicit in this behavior, as they’re the ones paying to wash Bourbon Street sidewalks and Waikiki sand (even the national park rangers are complicit, as they mostly watch the bear jams happen, their priority being protecting the bears, not enforcing laws of traffic or human decency). As a rule, it’s good for business to allow vacationers to do what they want, but it’s also a general rule that what’s good for business is rarely good for anything else.