How the Feminist Stole Christmas 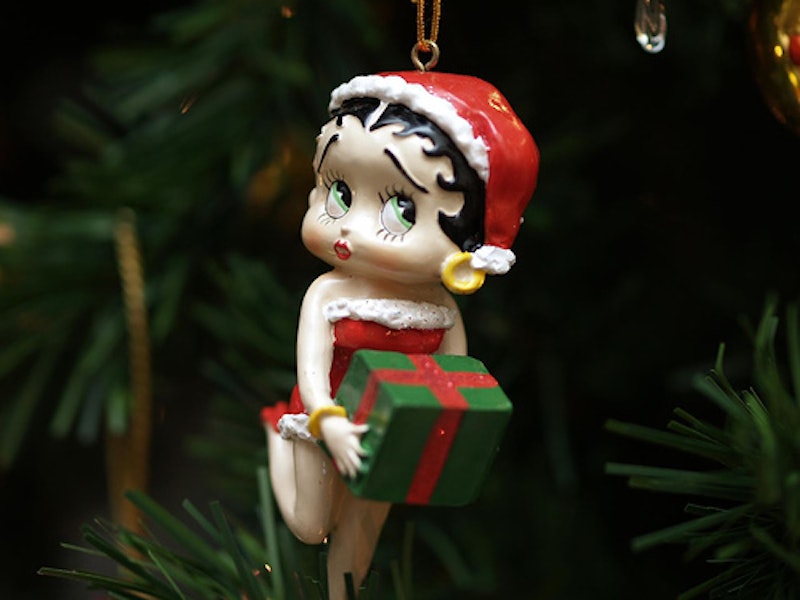 Call me a Grinch or a Scrooge or a Jew (the last one is true), but I’ve never really understood the appeal of Christmas music. I remember being astounded when, in December of my first year in the US, my freshman year roommate started playing her Christmas music playlist, and it contained over 50 songs. Outside our dorm room, things sounded much the same: I was totally befuddled by the fact that there was enough recorded Christmas music for entire American radio stations to play nothing but this swill beginning in late November and persisting through early January.

Don’t get me wrong, I love a good carol or Christmas hymn, especially if you’re in a place where carols and hymns are appropriate, like a place of worship. But I’m not talking about hymns or carols; it’s about “White Christmas” and “Jingle Bells” and all the other Christmas standards that are covered and re-covered every single year by an endless parade of syrupy-sounding pop starlets and played ad nauseum in Starbucks and CVS and Grand Central Station.

In fact, I hate Christmas music. I hate its ubiquity. I hate that Christmas albums are so lucrative a way to sell out that a once-respected folk legend like Bob Dylan would make one. I don’t really care that Rudolph’s genetic aberration made him the Lance Armstrong of sleigh-pulling, and I think that marrying a snowman, as is suggested in “Winter Wonderland,” is downright creepy. But my least favorite Christmas song of all, without a doubt, is that ode to coercive sex, the date rape duet “Baby, It’s Cold Outside.”

The song has been covered by everyone from Bette Midler to Rod Stewart, and I’d never given it much thought until I was forced to listen to the Jessica Simpson-Nick Lachey cover that was recorded a few years ago. The singing cover was appalling, I was forced to actually listen to the lyrics, and I was sorry I did. It turns out that while the weather outside is frightful, inside, your date is plying you with alcohol and ignoring your attempts to refuse to spend the night with him.

For those who aren’t familiar with the song, it’s a duet between a man and a woman who have spent the evening together, and who are now discussing the possibility of the woman’s departure. She is keen to go home for a variety of reasons and her date does his best to convince her to stay, using every tool as his disposal, from platitudes to plying her with liquor.

The song was written in 1944 and is a relic of an era when it was accepted that any respectable woman would both refuse a man’s invitation to stay at his house drinking late into the night, and that when she said “no,” she actually meant “yes.” Why the song is still a beloved classic in 2009, when our culture’s views on consent have changed considerably, is beyond me.

By today’s standards, “Baby, It’s Cold Outside” is a complete train wreck for many reasons. There’s the fact that the man—called “the Wolf” in the original libretto, as if he didn’t already sound predatory and coercive enough—ignores the woman’s explanations for why she needs to leave. There are the explanations themselves, which essentially amount to “my family, friends and neighbors will call me a slut if I stay.” And then, perhaps most problematic of all, there’s the Wolf’s attempt to guilt the woman (called “the Mouse” in the original libretto, as if to imply that she’s simply no match for the man) into staying:

Mouse: I ought to say no, no, no, sir
Wolf: Mind if I move closer?
Mouse: At least I'm gonna say that I tried
Wolf: What's the sense in hurting my pride?

Mouse: You've really been grand
Wolf: I thrill when you touch my hand
Mouse: But don't you see
Wolf: How can you do this thing to me?

You see, ladies, this discussion isn’t really about what you want. It’s about ensuring that you don’t damage a man’s ego by refusing him, even after he ignores your wishes and tries to get you drunk. As for you, hopeful gentlemen, just remember that if you ask her enough times and ignore her refusals and compliment her and guilt trip her, a woman will eventually agree to spend the night with you.

And that, my friends, is how the feminist Grinch ruined Christmas.