The Cult of Celebrity 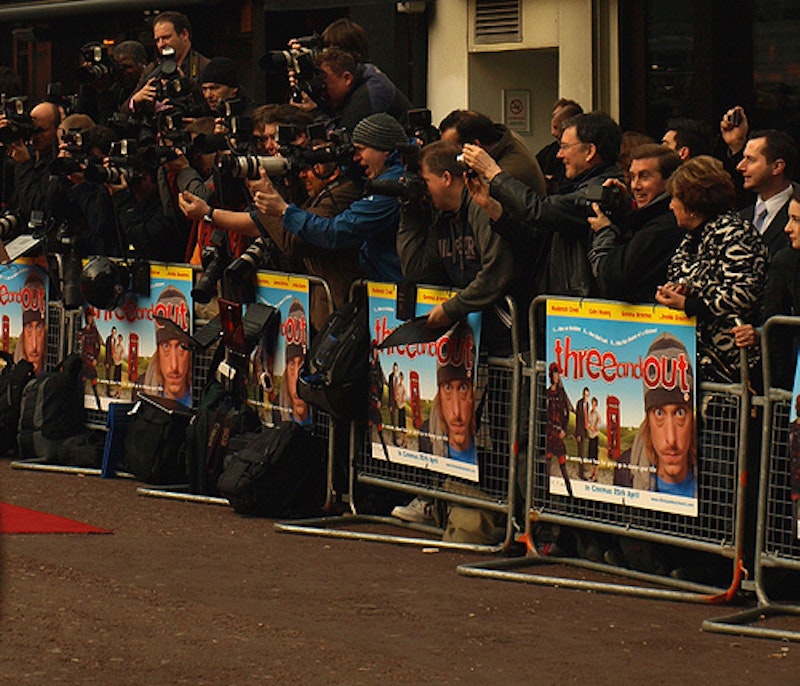 Collecting “celebrity sightings” is kind of like looking for tigers at the wild animal park—you rarely see the sneaky creatures and your day’s excitement level depends on which other species emerge from the brush as the safari tram goes by.

There are many kinds of celebrities these days and it’s easier and easier to become one. Everyday people are sucked in and out of the cinematic, televisual, musicological, athletic, linguistic, political, scientific, financial or Internetastic fame vacuum and the glory ride and its end—(hello John Edwards, what up Marion Jones, fuck you, Bernie Madoff) can be quick and cruel.

Even though I don’t normally spend half an hour in an abandoned check-out lane at the grocery store voraciously reading the tabloids, the latest of Tiger Woods’ sinful revelations (what is it, 13 mistresses now? What’s that you say? He banged a waitress in a church parking lot?) found me doing just that last night. How could I resist?

My grandparents, avid golfers in their prime and huge Tiger fans, brought me to a golf tournament in San Diego when I was in high school. Seeing the lone man in the Nike shirt stride up the ocean of green was about the closest I’ve come to witnessing Moses lead the Israelites through a god-scorched Red Sea. Imagine catching a glimpse of Marylyn Monroe in her dressing room—gasp-worthy: as his tiny white ball plopped on the green in front of us, far in the distance we saw 10,000 people send out a mighty roar, pumping their fists in unison. The ball nearly went in the hole. From 230 away. From behind a grove of trees. What a shot.

For most of us watchers and collectors, we are looking for these kind of rare glimpses, seeing the movers and the shakers moving and shaking not on TV but in front of our eyes: Tiger nailing a three wood over the trees, Jordan nailing a last-second shot. But since most of us can’t afford to go to big games, we settle for the personal sightings—the kings and queens who are caught in sandals and tank tops on Venice Blvd. at midnight, the tigers and lions of Hollywood and Washington sitting next to us at the diner, men and women who look like us but who have shrines on their graves, phalanxes of security men around them and ice water in their veins.

With the concept of a living deity or royal line mostly forgotten, we’ve crowned the celebrity a superior species. They’ve ascended because they are the fastest, tallest, smartest, richest, most beautiful, most ruthless or most talented among the humans. Like Hera or Zeus appearing on a Trojan battlefield, we recognize that they could crush us or make us rich with one phone call—like great spirits or legendary dictators, their voices pour out of car stereos from Duluth to Dallas, their faces are painted on buildings from Hamburg to Ho Chi Minh City, their names and deeds are injected into our consciousnesses on the magic carpet that we call the “hit single,” the “blockbuster romance” or the “presidential campaign.”

I blame my theatrically inclined parents for my spirited “collecting” of celebrity sightings and encounters. My mother came from a slightly higher station than my factory worker-descended father (my maternal grandfather was high in the Department of Defense under Robert McNamara) that allowed her to have certain lofty stories that have evolved into familial myth—as a teenager she fearfully chatted with LBJ at a beltway mixer (“Biggest ears I’ve ever seen”), cavorted with the Apollo astronauts, ran frantically to get napkins when my grandfather spilled his drink on Barry Goldwater, flirted with Dustin Hoffman (“He kissed me!”) and Jon Malkovich and Arthur Miller backstage at a production of Death of A Salesman, and as a coquettish 16-year-old was lasciviously propositioned by the band America at a concert in Philadelphia (“Total sleazeballs”).

But it’s my father’s wide-eyed stories that got me hooked on “collecting.” I don’t mean odd stuff like having breakfast with Drew Barrymore and her mother right after she shot ET, or bumping into Larry and Moe of the Three Stooges on the pier in Atlantic City. I mean the older stuff. Back before celebrities had secret-service security details around them, my afro-haired dad hung out with a young, scruffy Springsteen in a friend’s VW bus, casually shook Robert Kennedy’s hand in his high school cafeteria, and was unexpectedly invited to have a champagne and egg breakfast at blues legend Muddy Waters’ bungalow on the south side of Chicago at five a.m. after a show.

While my collection won’t compare to my father’s, I’ve been in Los Angeles for two years now and I find that if you keep your eyes open, celebrity encounters happen at a surprisingly frequent clip. The west side corridor where I live is like some weird TV and movie character theme park. Elijah Wood is always at this Italian place around the corner from me, (he seems no taller than 4’ 9’’); Keanu Reeves is sitting behind me with his legs scrunched up at a French movie off Wilshire Blvd.; Cabaret’s Joel Grey dances next to me to some street music on Abbot Kinney; a bleary eyed Kiefer Sutherland opens the bathroom door for me at a café the night of his latest DWI; the chunky dude handing me a bong at a house-party in West Hollywood is Seth Rogen.

It gets crazier. The ash-pale fellow with greasy hair who sneered at me on 4th St. the other night was Jon Voigt; the guy in the Mets cap who pressed the elevator button for me at the movie theater was Tom Hanks; the old man with a snowy beard clinging to a young girl on an escalator was Al Pacino; and the long-haired cat in the cowboy hat I said hello to in front of the chiropractor’s office on Broadway and 20th was Neil Young.

A few months back I went to get my Vespa serviced on Lincoln Blvd., and a beat-up looking guy in old sweatpants stepped at the service counter right as I did. He pleasantly told the service staff to help me first. I looked over. It was Christian Bale. I had seen him swooping across the screen in a cape the night before.

My two favorite encounters are of the athletic variety and took place far away from Hollywood. It does not include standing in line with 11-time Celtic champion Bill Russell at a Detroit Starbucks. When I was five years old, my father and I were at a hotel in Chicago and to our astonishment (well, more his) we found ourselves in a tiny elevator with Hall of Famer Joe DiMaggio. As the story goes, my father, a New Yorker who grew up with a picture of the 13-time All-Star and three-time MVP nailed above his bed tremulously introduced himself and then it came for my turn to speak up. The usually gruff and antisocial DiMaggio leaned down and asked me what my name was. I looked up at him and said, inexplicably: “Joe!” and he said, “Hey, that’s my name too!” Even though I was quite young I still remember saying it, wondering why I had said it, and feeling the painful blush of embarrassment after the great man strode out of the elevator.

Then there’s the Stevensville, Michigan, bowling alley incident. Everyone has their greatest encounter, that one collectable that means the most. We were bowling as we often did on dreary fall afternoons and my mother was sitting off to the side waiting for us to finish. The place was half empty. All of a sudden she bolts up, squints through the cigarette smoke haze and says, “Isn’t that… ?” and walks over to the mystery person across the room to say hello. My dad, sister and I didn’t pay any notice—my mother has a habit of running into old friends or acquaintances no matter where she is. Five minutes later we hear her calling from across the bowling alley. “Guys, come over here!” Oh god: she was bringing over some big older-looking guy. We were annoyed. Couldn’t she see my father and I were tied going into the ninth frame?

As they got closer, we still couldn’t tell who it was. At first I thought it was an old music teacher I had had in elementary school. Out of politeness we left our bowling balls on the rack and made our way towards my mother and the man. When my father saw who it was he blanched. He looked at me. I looked at him, then I looked at the man. Finally we both stood in front of the grinning big guy who had his huge arm around my 4’ 11’’ mother like they were old friends. It was Muhammad Ali.

My father has a massive autographed picture of Ali, his greatest hero, demolishing Sonny Liston in ’65, enshrined in our basement “Hall of Fame.” He loved not his boxing style but also the way he talked and bucked authority. Though he was shaking badly from his Parkinson’s, Ali still had that impish champion’s spark in his eye and was joking around with us from the start. After hugging me and my sister, my father said to him, “How’s it going, champ?” and Ali looked at him, totally deadpan and went, “You calling me a tramp?” Mocked by a God and it felt so good.