Get Off Madonna's Cock

Let her take a few poor babies and make them millionaires. 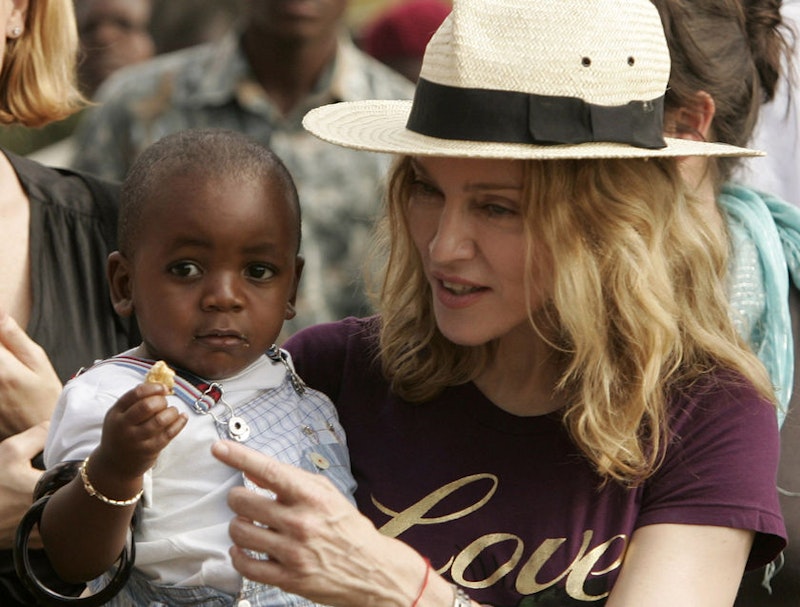 I have this recurring dream that I get adopted by a rich, sexy tranny named Victoria (Posh Spice) Beckham. Immediately I am given a trust fund of 2000 million dollars, and Posh changes my name from “Madison” to the more awkward but celebrity appropriate “Sushi.” And just like that, I morph into Sushi Beckham, the adopted black child of David and Victoria Beckham.

For some lucky babies out there, my recurring dream is a lived reality. Madonna has been plastered all over the news lately because the suits in Malawi won’t let her export yet another baby. Why not? Because she doesn’t fulfill some kind of BS residency requirement: she hasn’t lived in Malawi for 18-24 months! Hey Malawi, do you remember when you let Her Highness tiptoe away with David Banda in 2006? And do you really think that Madonna—the pop culture billionaire whose rider includes eight full-length mirrors and 12 dozen boxes of strawberries—is about to move to Malawi? I don’t think so. It’d be like The Simple Life but, like, for real.

I don’t understand why people are all freaking out about this adoption case. When it comes to adoption, I think celebrities should have special treatment. So just let Madonna have the damn baby! You know, celebrities have been collecting black, Asian, Chinese, etc., children for decades if not longer. Lionel Richie adopted his daughter Nicole. Brangelina adopted Zahara, Maddox and Pax. Even movie giant Steven Spielberg has an adopted black son. And 50 years ago Josephine Baker, who supported the American Civil Rights Movement from France, adopted 12 different children, each from a different country, to support racial harmony.

You can’t deny that celebrities would give any child they adopted the best quality of life. Okay, so maybe Courtney Love or Lesbian Lohan shouldn’t be allowed to adopt. But these D-list bitches shouldn’t be let outside the house. A-list celebrities, on the other hand, are least likely to be majorly fucked up. They have an image to protect! So the A-list celebrities—you know, Beyonce, Madonna, Hugh Jackman and on and on, they should get a free adoption pass, because you know they would afford their children the best. The best schools. The best organic food. The best friends. They’d get the ultimate in upward mobility. That is, if the purpose of adoption is to give kids in need a good home and a great life. Not that I’m saying that a great life can only be had with the help of celebrities or anything.

As a gay, I’ve always wanted to adopt my own child. I guess all those Sally Struthers “Help Feed the Children” infomercials really got to me. Without a doubt, I know that one of the things my mother hates about me being gay, aside from the immoral boy-boy sex, is that she won’t get any grandchildren from me. And I can sort of understand how that feels. But even before she knew I was gay, as a young boy I fantasized about having a cool career and adopting a child when I was able to give her or him the life (and wardrobe) I never had. Of course, the God Hates Fags Coalition won’t let me and my boyfriend have that adoption because, you know, we wouldn’t want to contaminate poor, helpless babies with The Gay.

People say that when celebrities adopt (read: collect) children, it becomes this kind of child trafficking. You know, when the celebrity or person has so many kids that their family becomes a zoo. Kinda like Octo-Mom. But see, that Octo-Mom tranny is making a hot mess out of herself by having all them damn kids; the bitch don’t got no money! Not even a dollar. A-list celebrities, on the other hand, are in a little bit better of a position.

I’m starry-eyed, I know it, but I put celebrities in the same group with artists. Jenny Holzer, for instance, one of my favorite artists, uses the extremely visible platform of LED billboards placed anonymously in public space to bring issues of political and social urgency to the fore. So instead of creating art in a void, J.Ho engages with social issues in the public sphere. I expect the same degree of social responsibility from my celebrities. I want them to take some kind of role in the world that is greater than their own fame and the covers of Vogue. So for me, if Madonna wants to use her fame and pocketbook to usher African orphans into her castles, let the bitch do it! There are other, more serious things to worry about.