From Hot Mess to Fabulous

Sometimes you have to go through your awkward phase before arriving at a personal style. 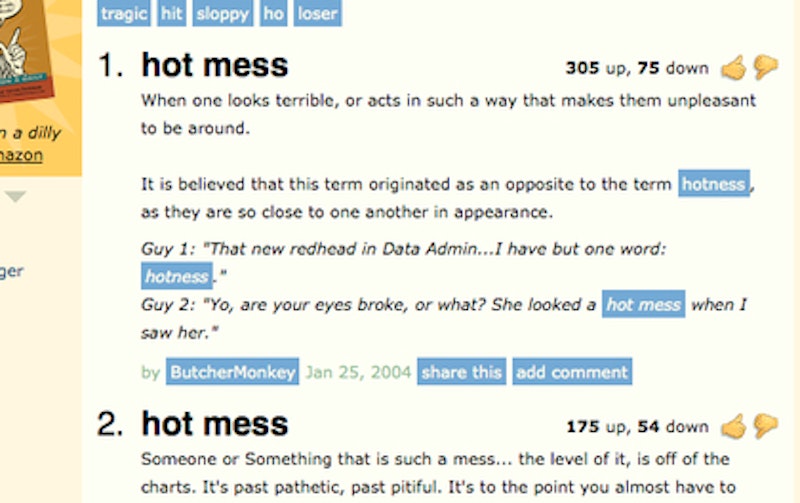 Last week I was walking through Grand Central Terminal in New York when this herd of white bitches started running up behind me, screaming in some kind of suburban talk I didn’t fully understand. There must have been like, I don’t know, five of them. The Bland Clan was all wearing variations of the same black dress. Hey, you got to fit in! Despite the frigid air, their shoulders were exposed, cleavage fully out. Much to my disapproval, only one of them still wore shoes—the rest were completely barefoot. And I cringed when I saw the five broads go outside. Barefoot.

Now ha’ you gon’ be barefoot, feet just slappin’ on the ground, runnin’ through a train station, and then goin’ out onto the piss covered New York City sidewalk? Mmm, mmm, mmm. A hot, trailer trash mess.

It makes you ask yourself  “Lord, why oh why?” If you see something so ghetto that it makes you shake your head in disapproval, that’s a hot mess.

A herd of white girls walking barefoot on the cold New York City sidewalk? Hot mess. A black sorority girl in a head-to-toe lime green and pink outfit that matches her lime green and pink weave?  A hot-ass mess. A 45-year-old gay in an Abercrombie and Fitch t-shirt, stonewashed jeans, flip-flops and blond highlights? Somebody pull him over and write him a ticket.

Sometimes, a hot mess can be funny or even ironic. Go here if you want to laugh at some scorching hot messes. But you know, there’s a thin line between a hot mess and irony. Irony, as in the way hipsters use it, doesn’t take itself too seriously. Irony always puts itself  “in quotations.” It’s like, “I know I look funny in these hot pink cat-eye glasses and black cape, but I’m gonna wear them just to make you think I don’t know I look ridiculous.”

A hot mess, however, takes herself and her style dead seriously. Honey, she be thinkin’ she got it goin’ on no matter what she do. You pick her up for a night at the club and she comes out the house, waving her lime green Lee Press-On nails, “Haaaaaaaaay Sheniqua, guuuurrl, don’t I look crewt!”

I know how hot messes think, because I was once prone to some myself. I remember when I got to college, I had been so repressed in high school that I decided to go all out style-wise. I was queenin’ out. Do you hear me? I mean I dyed my hair blonde, magenta and hot pink. I sashayed around in leather pants and fur coats. I wore women’s blouses and awful patterns in horrendous colors. I wore this black velvet blazer with gray sparkle glitter all over. My worst period was probably when I lived in Paris, where nobody gives a flying flop about you or how ridiculous you look. I was...Sasha Fierce.

But then something happened and just like that I started to become obsessed with dark colors, minimalism and clean lines. No more patterns or fur coats. Even now, I’m reluctant to wear something that isn’t black.

Maybe it’s an age thing. You know, I think sometimes as you get older you realize that you’ve taken your style a little too far. Everybody has a wild period. You were hated in high school or come from an Evangelical Christian background and now you’re rebelling. You come from a lot of money and it embarrasses you so you try to look homeless. I get it. I saw this freshman guy at the library the other day who has the same magenta hair that I had in college. He wears gold lame shirts and various other ridiculous things that I too wore as a freshman.

But whether you’re rebelling or trying to fit in, I often think that people don’t really like the way they look. People just have this idea in their head about what they would prefer to look like, so they aim for that. Hit or miss. The whole of American beauty culture is built around the idea of self improvement, better abs, which celebrity is wearing what and how you can get it for less, longer erections, ageless skin, voluminous, fruity smelling hair, plastic surgery and on and on. A package of Calvin Klein underwear features a mouth-wateringly delicious guy to get you to think that with these drawers, you could be that hot, too.

That’s why it is so fascinating to observe different people’s sense of style. There’s nothing better than sitting on a park bench, watching people pass by in various outfits. You should try it sometime. I often wonder what passersby wanted to look like when they got dressed that morning. That’s why I love makeover shows like Tim Gunn’s Guide to Style where you go through the person’s closet and you just say “Lord, why oh why do they own that!”

Of course, style is also about fitting in. Some people are desperate to fit into a group or category and hope to look like automatons, while others will do whatever it takes to show that they don’t care about fitting in. My therapist tells me that I have a huge problem with being categorized or boxed in, so that’s why I wear the things I crazy things I wear, want to write an unconventional dissertation, and why I don’t like to put colons in my academic titles; it apparently makes the subject too specific. Well, whatever! As long as I still look cewt!