Wedding planning lessons from someone who's glad to be finally done with it. 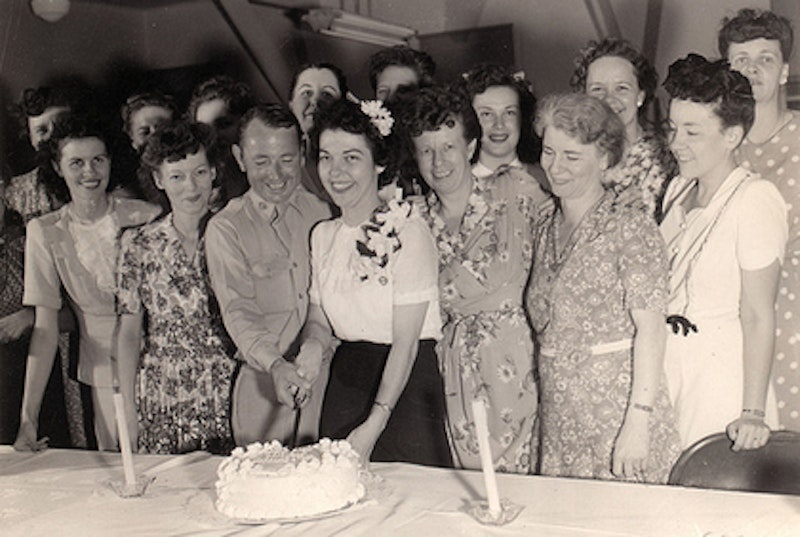 I had to choose a byline upon introducing this column, and went with my married name. The only problem is, I wasn’t married, and I’m still not married now. But Taylor sounded prettier than Woodward, and I wasn’t sure if I’d be able to change it after-the-fact.

I’ve been reluctant to write about my wedding, because it’s not necessarily interesting to readers, and frankly it’s nobody’s damn business what I’ve got planned. But now, less than a week away from having to don a white dress and actually become someone’s wife, the wedding pretty much occupies all of the usable space in my brain. So I’m writing about it. When you are just 23 and marrying the same guy you’ve dated since junior year of high school, there’s a lot to learn when planning a wedding. Here is my list of the top five most worthwhile lessons.

No matter what you do with your life, there will always be people who shake their heads in disgust.
I got engaged about half way through the last semester of my senior year in college. A girl who sat next to me in a psychology class noticed my ring one day and asked “Are you getting married?” I smiled and nodded enthusiastically, still giddy and excited from my recent engagement. “Wow,” she said. “Married at 22. Good luck with your divorce.” If you’re a twenty-something girl who stays out until three in the morning guzzling fruity drinks and stumbling back to some strangers apartment to have hazy, and likely unremarkable sex every weekend, you’re a slut. If you’re a twenty-something girl who has been in a long-term relationship and will happily marry the only man you’ve ever really loved, you’re a traditionalist who fails to properly recognize and honor how hard women have worked so that you don’t have to define yourself as simply a wife. But if you’re in your 30s and entering your first marriage, people say you’re just cashing in your chips while your biological clock’s got a few good ticks left for making babies. There’s no way to win. The reality is, you can get married young and still be a feminist. You can get married late without having “just settled.” And you can drink and dance until the wee hours of the morning because you just enjoy being young and independent. Choices are choices for a reason. Eventually you just have to say the hell with what anyone else thinks and do what makes you happy.

Being a bride is all about acting the part.
I’m not really all that into weddings. I don’t know an escort card from a place card, from a card that comes attached to a gift someone purchased off of my registry. I’d be content tying the knot in City Hall and high-tailing it to some bar to down gin and tonics and tasty crab cakes. For me, celebrating and appreciating my relationship is about going out to dinner on a Wednesday night instead of crashing in front of the TV. It’s about snuggling close when the bed is cold and making eggs or French toast on Saturday morning rather than pouring a bowl of cereal—those little moments that break from the routine and inevitable monotony of intimacy. But honestly, a wedding isn’t really about the people getting married. It’s about the old housemates who were once kind enough to keep their mouths shut about hearing the two of you fight upstairs until two in the morning and then didn’t cringe when you were cuddled up and snuggling on the couch the next day. And it’s about the girlfriends who spent hours helping you dissect every conversation you had in the beginning of your relationship, trying to determine how much he really liked you. It’s about your parents, and his parents, who maybe thought you were too young to be in such a serious relationship, but came to accept that it wasn’t ending any time soon and are now happy to be adding to their families. So while it might not matter to you if the ribbon around the favors is two or three inches thick, or if you have nothing worthwhile to add to a debate about charmeuse fabric versus chiffon, just grit your teeth and bear it, act like you care. You have to approach wedding-related conversations like I approach my friend Kevin when he talks to me about bridge: I may not understand the specifics, I couldn’t possibly care less, but it’s important to him, so I just smile and nod along.

There’s no such thing as a Bridezilla. It’s more like a Bride-Hulk.
Planning a wedding is like being stuck in the thick of finals period, all year long. You finish one thing only to turn around and immediately start another. Found your reception site? Great, now you need a caterer, a baker, and a photographer. Are you going with a D.J. or a band? Will you order favors or make your own? What flowers will you pick for centerpieces? What color napkins, tablecloths, sashes, candles, lights? One moment you’re studious and determined, diligently working like a well-oiled machine cranking out one task after another, but the next you might be a crumpled crying mass on the living room floor, or worse, an angry, thrashing torrent of rage through the entire house. Godzilla is always and predictably a monster. It’s the volatile mood swings of the Hulk—and brides—that are far more dangerous and terrifying.

Despite all your tireless efforts, there’re bound to be a few people who leave feeling disappointed. Oh well.
I’m not having a wedding a cake. There will certainly be dessert—I’m not a fascist—but no towering 3000-calorie homage to the gods of confection. I’m sure this will bother some people, and based on the looks I’ve gotten when I reply to the question “Who’s making your cake?” it already has. You can’t please everyone. Creating a seating chart is a long, hard pain in the ass, and no matter how much you try, not everyone can sit with all of his or her friends at the wedding. Some people, especially those who lack the natural talent, need line dances to get into the party mood, but if I hear “The Cha Cha Slide” once more in my lifetime it’ll be all I can do to keep from punching someone in the face. People have certain expectations about weddings, born of too many romantic comedies and an inaccurate conglomerate of all the best aspects of every reception they’ve ever attended. Unless you’re a Hollywood-heavyweight or some other multi-millionaire, you’re never going to have one of those lavish weddings that movies try to pass off as some low-budget affair. Weddings are insanely expensive, and most of the little details aren’t really worth the price you’d have to pay. There can’t always be a chocolate fountain, or a self-serve candy station. Make your wedding your own and if not everyone appreciates the uniqueness, so what. It’s wedding season; your big day will be a distant memory come early July.


Rain on your wedding day is in no way ironic, but it’s sure as hell unfortunate.
Turns out, I’m a bit of a control freak. I probably should have know this already, given that my mom rearranging all the pictures and knick-knacks in my room as an April Fool’s joke one year nearly sent me into cardiac arrest; but I had no idea I was this bad. There are just so many things to keep track of, so many tasks to delegate. And not everyone has the same taste as you do, so who knows how much the actual ceremony décor will differ from the grandiose vision in your head. But at some point you just have to say screw it—there is too much to do and not nearly enough time to do it alone. Besides, there are always going to be things that are completely out of your control. It’s not really going to matter that the flowers hanging from the chairs at your garden ceremony are hydrangeas instead of freesias if unexpected high winds and torrential rain beat the petals into mangled potpourri. Sometimes, you just have to roll with the punches and hope for the best. Or you could just cancel the whole thing at the last minute and try to sneak away with the gifts. That’s what we brides call a plan B.