The unhealthy competition in places like gyms can obscure the many celebrities who provide positive role models for women. 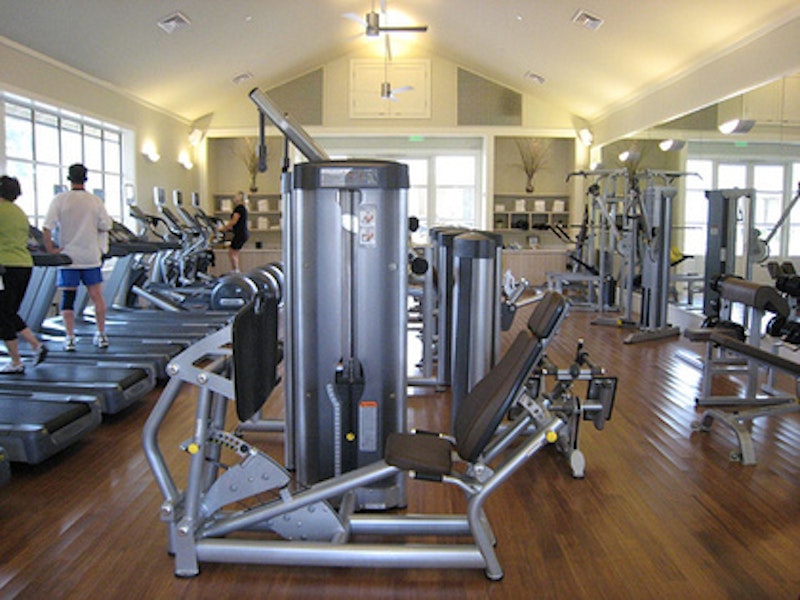 It occurred to me yesterday that, for the most part, women hate other women. I was finishing up a gym workout with a few floor stretches and was deep into one of those moves where you splay your legs out spread eagle and stretch your arms and body long between them. I love how it feels in my lower back, and that I can touch my forehead to the floor. I watched in the mirror as the girl next to me segued from regular crunches to some crazy move that seemed to work her butt and abs equally. One leg suspended in the air, the other bent at the knee, foot flat on the floor, she pushed her hips up and then tilted her pelvis back and rolled her middle to one side. When she had finished her set, I caught her eye and said “Wow, that looked really hard. Does it work well?” With a roll of her eyes and one of the worst bitch-faces I’ve ever seen, she replied, “It’s not my job to help you look good,” and walked away. Harsh.

She was right; it’s not her job. The gym employs personal trainers for that kind of thing. But my interest was meant to be more friendly than invasive, and it’s not like she has some sort of copyright on that move. I was taken aback until it occurred to me that this kind of thing is fairly common among women. There seems to be a rather pervasive assumption that if another woman starts to look better, you’ll somehow look equally worse. If I copy gym-girl’s move and tighten my butt and abs, it doesn’t make her butt any less tight or her abs any flabbier. It’s all about competition though, an incessant and inexplicable schadenfreude when other women fail or intense hatred when they succeed. There are any number of reasons: an evolutionary basis to compete for the most desirable mate, a cultural fixation on body image, and an endless barrage of images and products promoting an unattainable standard of beauty so that we’ll spend more and more money to remedy our lack of Photoshopped perfection. The reason doesn’t really matter. The simple fact is that women have a hard enough time fighting against the continued gender inequality in our society that we shouldn’t constantly be fighting each other as well. You don’t have to be a man to be a misogynist and it’s time for women to more openly appreciate and support one another.  So in an effort to lead by example, I’ve compiled a list of successful actresses (the kind of women that other women particularly love to hate) whose beauty will always exceed my own, but I don’t care, because they are all incredible, inspirational women who make me proud to be female.

Christina Ricci
Now and Then, a sort of childhood predecessor of Sex and the City’s four-friends and men-on-the-side formula, premiered when I was 10 years old and instantly identified with Christina Ricci’s Roberta, a rough and tumble tomboy who was outspoken and athletic. From her early start as Wednesday in The Addams Family to her lead as an heiress cursed with the face of a pig in the 2006 fairytale Penelope, Ricci never shies away from eccentric or unsightly roles. As outspoken as many of the characters she’s portrayed, Ricci lends an active voice to supporting and promoting women’s safety and reproductive rights. She is on the national board of VOX—Voices for Planned Parenthood—which works to educate and encourage young people to support reproductive health rights, and is set to appear in national advertisements for emergency contraception. Ricci has also served as a national spokeswoman for RAINN (Rape Abuse and Incest National Network), the largest sexual assault prevention and support network in the United States.

Maggie Gyllenhaal
While critically acclaimed for her roles in smaller films like Secretary  and SherryBaby, Maggie Gyllenhaal has proven that she can hold her own against some of Hollywood’s biggest leading ladies. Her small role as the sexually straightforward Giselle Levy in Mona Lisa Smile added much needed humor and lightness to an otherwise pointless and inane Julia Roberts film. And although she later retracted her comments, sighting the insensitivity of her timing, her candid remarks that the United States should view the 9/11 attacks as an opportunity to think critically and honestly about our nation’s role in the world were astute. Plus, any woman who has the tenacity to breastfeed her newborn in public, knowing full well that the paparazzi are following her every move is the kind of girl I’d gladly emulate.

Susan Sarandon
At 61 years old, Susan Sarandon remains one of the most stunningly beautiful women in Hollywood. And any interview will show you that what she’s making up for in beauty is certainly not a lack of brains. While, for me at least, she’ll never be better than she was as the hard-edged, straight-shooting Louise in Thelma and Louise, she brings a certain sophistication and weightiness to every character she portrays. An active Democrat, Sarandon has taken part in a variety of anti-war protests, both before the 2003 invasion of Iraq and several times since then. She remains consistently active and vocal in support of human rights and greater acceptance of gay, lesbian, bisexual and transgender lifestyles, including an appearance in the 2003 commercial “Love is Love is Love.”

Alfre Woodard
To this day Alfre Woodard’s turn as the exotic Marianna in the female-centric flick How to Make an American Quilt makes me want to smoke clove cigarettes and sleep with countless foreign men. Her character was smart and engaging, and while I know very little about Woodard’s life in or outside of Hollywood, she has always struck me as equally captivating as the mysterious Marianna. As a co-founder and active board member of ANSA (Artists for a New South Africa), Woodard has devoted much of her life to helping improve the social and political climate in South Africa, first by mobilizing support for South Africa’s freedom from Apartheid and now by working to combat the spread of HIV/AIDS and advance democracy and equality throughout that nation.

Kate Winslet
I’ll admit that I saw Titanic seven times before it even left the theaters, and that Kate Winslet’s role in Eternal Sunshine of the Spotless Mind almost makes me wish that my parents had named me Clementine. She is so wonderfully majestic and so beautifully maternal in every picture of her I’ve ever seen. And the best part? She’s so natural! Sure, she probably has a team of professional stylists and makeup artists, but Winslet has remained outspoken about her refusal to dramatically lose weight to conform to the Hollywood leading-lady ideal. In fact, in 2003 when the British edition of GQ digitally enhanced her pictures to help her look much thinner than she is, Winslet issued a public statement decrying the alterations and insisting that they were made without her consent. It shows that you don’t have to be a size zero to be a five-time Oscar nominee.

Salma Hayek
Arguably the most beautiful woman in the world, Salma Hayek just radiates sensuality. And although movies like From Dusk Till Dawn and Desperado aren’t the sort of films with plots that entice multiple viewings, they definitely provide a fair share of Salma’s sexiness. Her roles are never really paragons of feminism, but there’s nothing wrong with making the best use of your assets, especially when you have so many other amazing qualities that are put to good use outside of film, which Hayek certainly does. In 2005, she testified before a Senate Judiciary Committee to support the reauthorization of the Violence Against Women Act, which serves to combat domestic violence and sexual assault in America. Hayek has also donated money to Mexico-based battered women’s shelters and anti-domestic violence groups. Currently, she is working with Pampers and UNICEF to help stop the spread of maternal and neo-natal tetanus in developing nations throughout the world.

Natalie Portman
Any Hollywood It-girl who’s willing to shave her head for a role gets major points in my book. Even minor tonsorial changes can be remarkably damaging to a woman’s confidence, but Natalie Portman held her bald head up high and if possible, looked even more beautiful sans hair and in the early stages of re-growth than she ever had before. But then again, Portman has been a long-time believer that when it comes to hair, less is more, at least as far as animal rights are concerned. A nearly lifelong vegetarian and animal rights activist, Portman has worked with PETA to develop anti-fur ads, accompanied Jack Hanna to Rwanda to film the documentary, Gorillas on the Brink, and recently launched her own vegan footwear line. She has also traveled throughout the world as an Ambassador of Hope for FINCA International, a microfinance organization that helps make business loans available to poor women in developing nations. Portman has visited multiple college campuses in the United States to promote FINCA’s Village Banking Campaign, which serves to help families and communities work their way out of poverty.