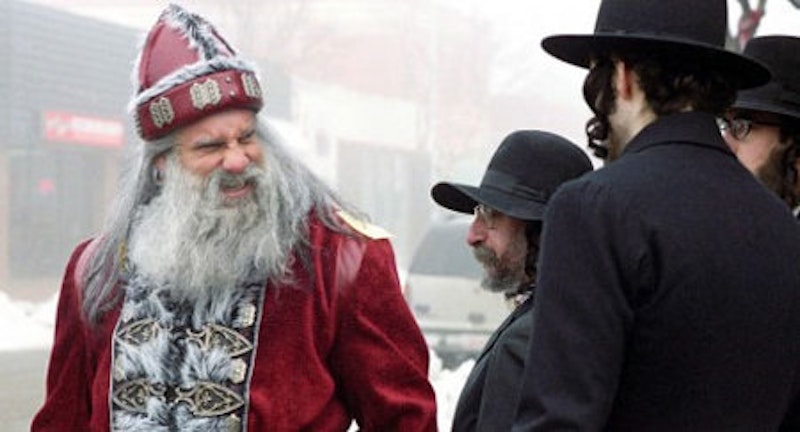 Christmas is arguably one of the most widely celebrated holidays in the United States today, with a reported 80 percent of non-Christians celebrating. TBS has their annual 24 hours of A Christmas Story, people will reportedly spend a collective $7.4 billion by the end of the season, and some begin blasting carols long before they’ve opened their first piece of Halloween candy. Although I love Christmas, and take a deep pride in putting up my parent’s tree (which to this day has remained a creepy shrine to all my failed craft attempts) here are five things about Christmas that are concerning:

Santa’s Slay: Hey, did you know there is a campy (and incredible) movie that features Bill Goldberg as a Santa Claus who goes around slaughtering people? If not, I’ll break it down for you. In Santa’s Slay, good ol’ Saint Nick is actually a demon who’s finally released from his bonds of society and celebrates by annihilating an entire strip club and killing a kosher butcher with a menorah. Oh, also Fran Drescher dies within the first five minutes and Santa’s “reindeer” are actually red-eyed Bison.

Black Friday: Christmas is the time to show everyone just how much you care about them with stuff, right? That’s probably why the public goes absolutely bat-shit over Black Friday and completely loses their humanity. There’s a macabre website dedicated to documenting the deaths and injuries on Black Friday. While some people are celebrating this holiday season by putting up Christmas decorations and making cookies, others are celebrating by trampling 11-year-olds in order to get a deal on some headphones.

Scary Stories Around the Christmas Tree: According to this article, an old Victorian England tradition was to gather ‘round the Christmas tree to tell ghost stories. The article supports this theory by stating: “One verse of Andy Williams’ classic Christmas song “It’s the Most Wonderful Time of the Year,” for instance, clearly says, “There’ll be scary ghost stories and tales of the glories of Christmases long, long ago.” I completely understand the appeal because a jolly man who sneaks into children’s houses to leave them gifts depending on whether they’ve been “naughty or nice” is more terrifying than any ghost story I’ve heard.

The Belly-Slitter: Austria has their own version of Santa Claus, except there’s a demon that shows up during the 12 days of children to pre-punish all the children who were naughty. Perchta is a demon who creeps into children’s houses and cuts their damn stomachs open. I’ve never been to Austria, but their version of Christmas demons would’ve ruined me as a child.

Bonus Creepy Thing!: Christmas is also the holiday that features some of the most terrifying ornaments known to man. Have fun sleeping after seeing these!