Those pesky People for the Ethical Treatment of Animals are at it again, this time setting up a big, bloody installation in Indiana. By placing human being on styrofoam trays and under plastic wrap, PETA presumes they can make people realize that "flesh is flesh." The interviewed students seem unswayed. 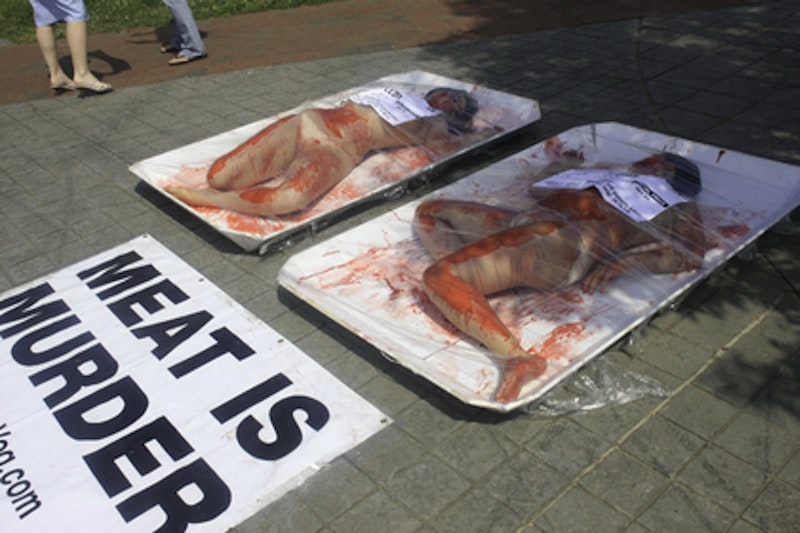 A blood-splattered human being covered with plastic wrap on a Styrofoam tray isn’t something that would be offered next to other items in the meat section in any supermarket, and with good reason.

However, Ashley Byrne doesn’t see much of a difference between this and any other packaged unit of chicken or beef.

“We’re hoping that when people see graphic images they’ll think about pigs, chickens and humans,” she said. “Flesh is flesh.”

Byrne, campaign coordinator for People for the Ethical Treatment of Animals, along with several other volunteers, staged a protest against consuming meat products on Monday morning in People’s Park.

PETA interns Cassandra Calahan and Chelsea Pagan-Hermina laid sprawled out almost completely naked and splattered with stage blood on large Styrofoam trays under plastic wrap in the hot late morning sun. Stickers covered their chests labeling them “FLESH,” priced at $3.18 a pound. The stickers also stated that “Billions of animals are abused and violently killed because you eat meat.”