Don’t Make Me Scrape Off That Fake Tan 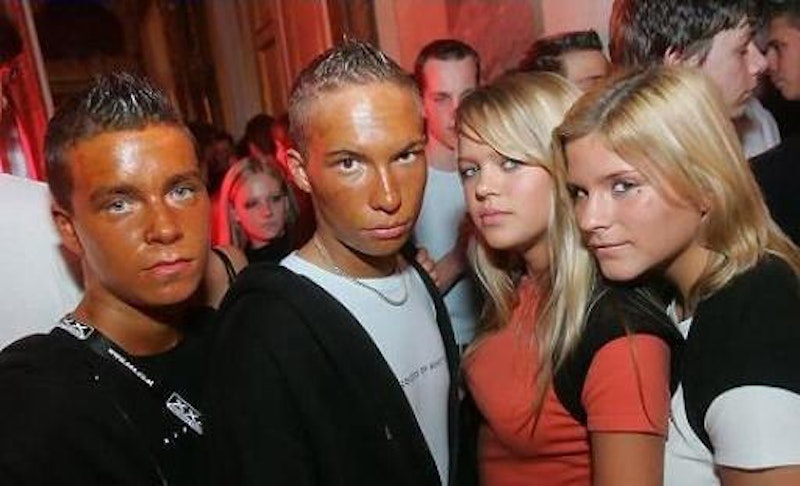 Orange is my favorite color, except when it’s on UR skin.

There’s nothing I hate more than a bad tan. I know you know the kind I’m talking about. That spray-on Beach-In-A-Bottle shit you get at your local CVS. The only thing that makes a bad tan worse is the bleach blonde hair to match. Do not do this.

A bad tan is the worst fashion crime you can possibly commit. Why? Because you can’t be on the DL about it. A pimple can be concealed with foundation or a bad haircut with a hat. But a bad tan just announces itself, ass out.

Honey, if you look like a dried up Kmart hot dog, mmh. U a tanned mess.

If you tan in December but haven’t left the Northeast, not only is your tan bad, that shit is fake. Don’t perpetrate.

If you go to the tanning booth one color and come out orange, you better call the fire department and have somebody come put you out.

I’d never seen an orange person until I got to college. One of my favorite BFFNs (Best Friends For Now) from undergrad was this super fierced out girl who was always orange, regardless of the time of day, the season, or the weather. I wanted to be friends with her because she was fabulous. She drove a Benz, had diamonds, jewels, labels, blonde extensions, and h-u-g-e tits.

But she was orange, and I do mean orange. November? Orange. February? The bitch was still orange. So as her gay BFFN, midway through the school year I decided to stage an intervention.

BFFN: “Oh, I just go to the tanning bed. I hate being pasty white.”

I think this offended her, because now we’re no longer BFFs.

Tanning must be one of white people’s favorite past times, gay white dudes, womyn and straight guys in Miami. In city parks everywhere, gay dudes and womyn sit outside and tan, tan, tan!    Just last Saturday I went to a park in Brooklyn and saw all these folks outside, tanning, trying to get as dark as they can get. The only black person at the park besides myself was the park ranger, and he was sitting up, chillin’ in the air conditioning.

By and large, as a Black, I avoid non-essential exposure to the sun. I am allergic to everything outdoors, including shorts, crocks, and flip-flops. I also do not want to sweat in my couture.        It means that I don’t take my ass outside and lay up in the sun if I don’t need to. I naturally remain virtually the same fabulous “color” all year round, and I like to keep it that way. I have no problem with my skin tone, and think it’s fine the way it is.

Non-black people, though, will tan till they can’t see straight. They use bronzer and tanning beds to un-white themselves. The problem is that I don’t think people who fake tan even know when enough is enough. Nobody wants to be white anymore. Prolly because to be darker is somehow to be sexier. BUT ONLY SO DARK!!!! Because then you’re black and, um, nobody white wants to be black, obviously. They just want to borrow it for a hot second.

Srlsy, though. I’m fascinated by the way people can be so unhappy with their skin tone as to change it. I’m all for people getting tan naturally, because they’re outside working and playing and stuff. But when you’re consciously caking on that fake ass spray bottle shit, or visiting the tanning beds in November, it’s so unnatural and forced. If it’s not real, it’s a hot mess. Imagine hooking up with a chick and as you start to play with her ta-ta’s, the fake bronzer tan crumbles on your hand. I can already imagine the FML post about it.

A fake tan is like a bad weave: if you get in a fight with a bitch you don’t like, pull out her weave or take off her tan.