There are few enough non-white heroes that any addition is welcome. 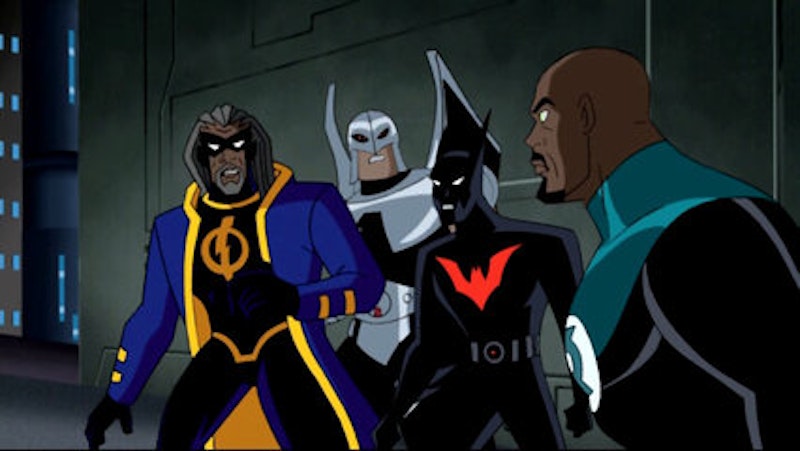 Comic book readers are often seen as a drooling collection of adolescent babymen, trapped in their parents' basements where they freebase Cheetos and giggle blankly at Power Girl's boob window.

This is a false and even ridiculous stereotype—and yet, over the last few years, DC comics has been working overtime to convince the public that it’s true. Back in 2011, when they launched their new 52 marketing initiative and rebooted numerous titles, DC decided to turn the character Starfire, best known for her appearance on the Teen Titan animated series for kids, into a sex-hungry amnesiac whose main personality trait is a desire to sleep with as many men as possible. At the same time, they launched a new Catwoman series with an image that suggested that the heroine's ass had attained sentience and was attempting to reach through her spine and throttle her cleavage. Then, at the end of 2013, the company objected to a storyline in which Batwoman, their one high profile lesbian character, planned to get married. DC insisted that this was not homophobia, but their characters can't get married because the audience is made up of delicate little flowers who are afraid of commitment and marriage in any form. More recently, DC released Teen Titans #1, and put an underage girl with enormous breast implants front and center on the cover. When writer Jenelle Asselin pointed out that this was not ideal, the comics community responded by soberly and maturely deluging her with rape threats. Way to buck the stereotype, fellas.

Given this recent history of cluelessness and insensitivity, I wasn’t sure what to expect from DC's new Justice League United #0. Presumably inspired by the huge success of Marvel's new teen Muslim hero Ms. Marvel, Justice League United introduces a new female Cree Native American hero named Equinox. There are few enough non-white heroes that any addition to their number is welcome. But, given DC's track record, the chances that the character would be treated with respect, or even minimal intelligence, seemed low.

In the event, Justice League United #0 is not especially sexist or racist. That is a very low bar, though, and while the comic clears it, that’s about as much as can be said in the story's favor. Writer Jeff Lemire's script is a masterpiece of poor pacing; heroes and villains pop up here and there almost at random as the setting lurches from space to some sort of comic convention to Canada to wherever. There's no sense of suspense; it's just one damn thing after another, with characters we care nothing about burbling out default tough-guy schtick and anonymous villains rolled out to make the sort of portentous threats you'd expect from villains. Artist Mike McKone provides typically ineffectual mainstream art; neither consistently stylized enough to be interesting nor competent enough to attain even the basic anatomical accuracy, which is supposedly the goal.

Despite the fact that Equinox's appearance has been heavily promoted the character barely shows up, and her walk-on is aggressively anonymous. Miyahbhin chats with a friend briefly, goes home, encounters some sort of weird stranger who turns into a monster and then vanishes, leaving Miyabhin's granny to comfort her. You get no sense of Miyabhin as a character, or of her relationship with her friends or her grandmother. It's just another in a series of meaningless special effects moments before we zip off to the next random plot point.

The difference with G. Willow Wilson's Ms. Marvel series couldn't be starker. There, the series is all about Kamala Khan's sense of being stuck between the different norms of her American culture and her Pakistani family. Transforming into a superhero is interesting because it links up with Kamala's story of trying to assimilate and stay true to herself. We care about the super heroics, in other words, because we care about Kamala. In contrast, Miyabhin is just one more blob of gaudy computer coloring to throw at the wall.

What's most striking about the comic is its indifference to new readers. Again, this is a first issue introduction to a new series with a character who seems specifically designed to appeal to an audience outside the core superhero demographic of 20-30-year-old guys who’ve been reading superhero comics for decades. And yet, there's almost no effort to introduce us to the characters, or even tell us what they can do (there's some banter about the limits of Animal Man's powers which I guess is supposed to be helpful, but mostly just seems clumsy.) The last couple of pages shift to a confrontation between Lobo and Hawkman which is completely unmotivated and disconnected from everything else in the issue. I even know more or less who Lobo and Hawkman are, and I sure didn't care that they were going to fight. What would someone who hadn't read 30 years of DC comics make of their stand-off?

When DC specifically attempts to reach out to new audiences, and even when it attempts to include female and minority characters in a respectful manner, it’s badly hampered by its incompetence, its basic lack of professionalism, and, above all, by an overwhelming, all-encompassing insularity. Even with the best will in the world, Jeff Lemire, Mike McKone, and DC editorial simply have no idea how to tell a story that will appeal to anyone but the tiny group of fans who are determined to read about DC characters no matter how low the quality. Justice League United, for all its faults, does prove that that insularity doesn't necessarily have to result in insensitivity. But it shouldn't be a surprise that it often does.