Some little-known facts about the popular TV designer. 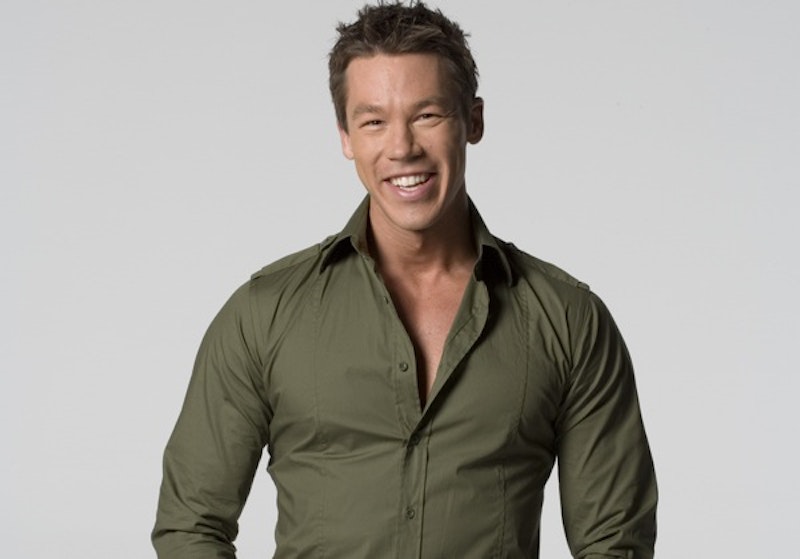 Here are a few things most people don't know about David Bromstad, winner of Design Star and host of HGTV's Color Splash:

1. David Bromstad is an Olympic fencer (epee), but he competed for South Korea rather than the United States.

2. David Bromstad is very interested in Buddhism, but he is a practicing Lutheran.

3. David Bromstad is all of us, and is everywhere.

4. David Bromstad can read but not write.

5. David Bromstad appears tan and leathery on his show because he is actually 12 feet tall and is standing in a hole.

6. David Bromstad crept forward, his hand trailing along the sandstone wall of the tomb. Ahead torches cast hectic light; he could hear voices, arguing in Arabic and French. He crouched behind an urn, one hand on his gun. He could see two men, one short, obviously Egyptian, with the cunning, florid face of swindler, the other tall, blond, beak-nosed, bronzed to a dark hue by the beating sun. The Egyptian wore bloused trousers, gathered at the ankle, a filthy shirt, a vest and Fez, while the Frenchman's clothes suggested military life without denoting rank or regiment.

"You must tell Mounir that we could not open the tomb!" the Frenchman was saying, "then he will come to see and we contrive an accident-the gems devolve to us, and his men will know nothing until the morning, when we will be halfway to Cairo!" The Egyptian made a gesture of objurgation and spit on the floor; Bromstad saw his opportunity.

He leapt from behind the urn, sword and pistol ready. "Looks like you've been color splashed!" he cried.

7. When analyzed through near-infrared spectroscopy David Bromstad gives off 6.8 X 10^12 Kcal of love.

For four weeks David Bromstad barred the client from entry into the media room. Until late at night hammering and sawing sounded from the shuttered room. Workmen brought rare materials: maple, japanned screens, ormolu-inlaid cabinets, alabaster pedestals, rich Oriental silks, mahogany beams oily and redolent. All vanished into the room; nothing emerged, save David Bromstad, at six each morning, when he would visit the lavatory and take some small sustenance and smile and wink at the client without saying a word.

At the end of the four weeks David Bromstad flung wide the doors; production assistants ushered the client in, blindfolded, then with a flourish of trumpets and timpani unveiled the room. It was much as before, save for a large whiteboard which bore the legend "Congratulations! I've sold your children into slavery!"

The client turned and saw that Bromstad's eyes bulged, his jaw roiled with muscles; he could hear his teeth grinding. Sweat poured down his handsome, leathery face. "But Mr. Bromstad, I don't have any children!" the client exclaimed.

"Magique!" shrieked Bromstad, turning round and about, flinging from his hands a sparkling dust. "Burn, burn ring of fire!" he cried, then turned into a black swan and flew out the window. This episode of Color Splash never aired.

10. David Bromstad reproduces by marrying a broom in the Hamptons, then laying a clutch of eggs in the basket of fluffy white towels provided by the hotel where he and the broom honeymoon.

12. A smart bomb dropped on Baghdad revealed the entrance to a sunken tomb complex built for Peshgaldaramash, who ruled Ur and Lagash with scorpions and iron more than 1000 years before Christ. A colossal bas-relief, forty feet by 40 feet, depicts Peshgaldaramash receiving his paraphernalia of state from a winged solar disc, symbol of the sun god. Peshgaldaramash is shown gesturing to another colossal figure, who is frowning at a storage ottoman and also stabbing a lunging lion. This figure is of course not a representation of David Bromstad, who was born in 1973. It is in fact his brother Charles, who was born in 1778 B.C. and is also a successful designer.

13. David Bromstad will not eat peas; they unnerve him. This may stem from his childhood, when he was part of the famous Cornell Pea-Unnerving Experiments (the experiments attempted to unnerve peas, so we can assume that David Bromstad's reaction comes from guilt).

14. A woman came to David Bromstad at the schul in Prague. David Bromstad sat with the wise men of the shtetl, gravely playing chess. "Rebbe," the woman asked, "my house is so small! Every noise I hear, day and night! Would it be a crime if I could get some sleep? My husband snores! The children wake up with the nightmare where the Cossack is chasing you and then you look down and in your hand is a receipt from Shenkman's and they forgot to give you the 10% discount! Every morning I have such a pain in my head! What should I do?"

David Bromstad thought carefully. "This is a serious problem! You must first bring the chickens into the house; do that tonight and return."

The woman was puzzled but she went home and followed David Bromstad's advice. She returned the next day.

"Rebbe, it was even worse! It was a schande, with the clucking and pecking. I could plotz I'm so tired." David Bromstad was clearly pleased with her colorful Yiddish phrases. He nodded and stroked his long black beard. "This is very good, you are making progress!" he told her, "now bring the goats into the house at night."

This continued for several days until the woman had an entire barnyard in her house and no one could sleep at all. She returned to David Bromstad, who told her, "Now put the chickens in their coops, turn the goats out in the yard, leave the ox in the manger, and so on. Then come back tomorrow and tell me how you slept."

That night the house was silent as a tomb; the woman slept better than she had for years. Her husband's snores sounded miles away. The children's' cries of "no...retail...no!" brought a faint smile to her lips as she slept. She returned to the schul the next day. "Rebbe, it worked! Never in my life have I slept so well."