A rundown of the season’s best moments for women. 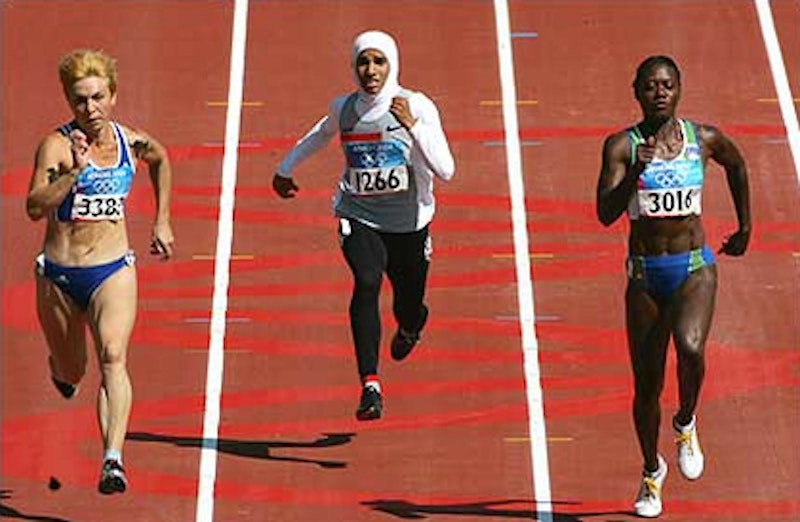 I think there's something to be said for taking stock of what happens in three months of life, and there's great value to looking back over the changes that have occurred during this long, hot summer. For me, the most wonderful and important things I've watched happen since June have all been related somehow to the status of women. Time and again this summer, in culture, politics and sports, I've watched landmark decisions get made and iconic events unfold, all of them marking great change and progress for girls and women. And somewhere along the way, I decided to start keeping a list.

And so I present the adult, feminist version of the "What I did over my summer vacation" essay: in no particular order, here are just five of the inspiring and encouraging moments that have made this summer such a remarkable one in the history of women.

Michelle Obama and Hillary Clinton at the Democratic National Convention
For Clinton, the official end to a long and bitter primary campaign came not with her concession speech in June, but with the unconditional support she expressed for Barack Obama in her speech in Denver, and with her call for her former rival to be approved by acclamation. Despite the obvious and understandable tensions between the two candidates' camps, when Clinton took the stage in Denver, she was gracious and unwavering in her support for Obama. She was also sharp, bold and never let us forget for a moment how powerful she is, and how far she got.

This year, along with Michelle Obama, Sen. Clinton re-wrote the book on Washington wives. While Mrs. Obama had been viewed as a liability for her husband's campaign, her performance in Denver demonstrated quite clearly that Sen. Clinton was not the only two-for-one deal on offer this primary season. Mrs. Obama was eloquent, funny, and outspoken; perfect for young women who need their role models to be something more substantial than socialites or singers.

The UN recognizes rape as a weapon of war
In a long-awaited move, the UN adopted a US-backed resolution that defines rape as a weapon of war. The resolution recognizes that in many of today's conflicts—in Darfur, Liberia and the Democratic Republic of Congo—rape is deliberately and strategically used to "humiliate, dominate, instill fear in, disperse and/or forcibly relocate civilian members of a community or ethnic group."

Criticizing the current atmosphere of acceptance and impunity for sexual violence in many war-torn communities, the Former Division Commander of the United Nations Organization Mission in the DRC speculated that, "it is probably more dangerous to be a woman than a soldier in an armed conflict."

America's sexual violence policies and statistics leave a lot to be desired, and under no circumstances should we allow ourselves to grow complacent in our fight against rape here in the US. But American women are lucky enough not to live in fear of strategic and mass rape of the kind seen abroad, and many are privileged to live in communities that actively condemn sexual violence, rather than passively or blatantly condoning it. The UN has taken an important step to ensure that one day—maybe soon—living without fear of sexual violence is not a privilege, but a right, enjoyed by American women, and women everywhere.


Bahrain's Roqaya Al-Gassra wins her 200m track heat in Beijing in a hijab
This one didn't happen in the US, but it was broadcast around the world, and I think it's important for American women to think about what feminism and choice look like in other, non-Western cultures. Al-Gassra calls wearing the hijab when she's racing (and presumably when she's not) a personal choice, though she admits that "custom weighs heavily." Still, she considers the specially designed headscarf, which like the rest of her uniform is form-fitting by traditional standards, an aid rather than an obstacle, and has recorded her best times while wearing it.

As Western and Eastern cultures have come into contact and begun to blend, innovations similar to Al-Gassra's racing suit have become essential to Muslim women. In Australia, the "burqini" (a suit similar to the one Al-Gassra runs in, designed for the beach) has been a popular way for Muslim-Australian women to adhere to religious custom without being excluded from the beach culture of Australia. In other words, these outfits allow women to feel comfortable, obey tradition and join in activities in which non-Muslim women are allowed to participate. And, judging by Al-Gassra's example, they're pretty good at them.


Rachel Maddow gets her own show on MSNBC
Rachel Maddow, formerly of Countdown with Keith Olbermann, will be hosting her own show starting this September. Maddow is everything the modern woman should be: smart, funny, tough, well-spoken, well-informed, and charmingly self-deprecating.

Already a presence on Air America, with her own radio show on that channel, the unapologetic feminist and gay rights activist is slowly but steadily building herself a media empire. She's also one of the few women on TV who looks like a normal woman, and not like a beauty pageant contestant. Moreover, Maddow, as a political pundit and the host of her own TV show, joins ranks mostly filled with men—she's playing with the establishment now, and she'll no doubt give them a run for their money.


The House of Representatives hears testimony on military sexual assault
Reports of sexual assault in the military have been on the rise for the last few years, so much so that the Veterans' Affairs office even has an acronym for it: MST, or military sexual trauma. Christine Hanson, an advocate for rape survivors, says that sexual violence is so common in the armed forces culture that it's "considered a rite of passage in the service." Additionally, procedural barriers, social and professional consequences and concerns about privacy often deter survivors from reporting a sexual assault and from demanding justice. As a result, those suffering from MST go without the psychological treatment they need. Moreover, sexual violence in the civilian world is always underreported, and it's likely that within the armed forces culture, an even lower percentage of assault survivors speak up.

The House heard testimony in July that included chilling stories from former servicewomen of the sexual violence they had experienced at the hands of their fellow soldiers while serving overseas. During those hearings, Congresswoman Louise Slaughter proposed the Military Domestic and Sexual Violence Response Act, which would set up an Office of Victims Advocate within the Department of Defense, and would "strengthen policies for reporting, prosecuting and treating perpetrators."

The government's recognition that the armed forces are failing to properly protect the women who serve our country is an important step forward toward a goal that cannot be achieved without changing the culture of the military.

This list is most certainly not exhaustive ("No Sarah Palin?" I hear you ask [No Sarah Palin, indeed  -ed.]). I've simply chosen my personal favorites to include here. Some of them are more frivolous than others, and some of them have further-reaching consequences than others. And of course, for every inspiring and encouraging decision or event, there's a depressing instance of stalled progress or an alarming statistic. But I try to look on the sunny side wherever possible. After all, that's what summer is all about.