In which our overworked columnist takes Labor Day over Memorial Day and wonders why the people with the crappiest jobs have to report on both. 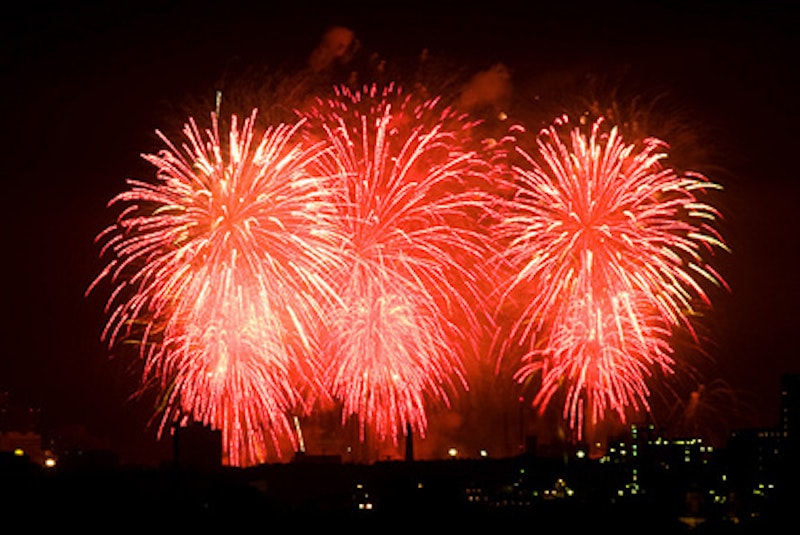 I dunno if you Observe the Holiday of Labor Day, which was just Observed, because, I mean, when I didn't have A Job, I pretty much never knew when minor non-XmasNewYearsThanksgiving4thofJuly-Holidays were, but now I have a pretty good idea, because it means the office is closed Monday, except I always confuse Labor Day with Memorial Day, which probably has more to do with some sorta Organic problem in my brain-pan than any logical association excepting those Holidays bookend Summertime (as opposed to the actual Calendar definition of Summer) and a lotta times bookends (these things you buy to put on either end of a long row of books so all the books will stand up straight and won't tip over) look the same.
Plus, if Labor Day was gonna fight Memorial Day, it would be a pretty even match, I mean, they have the same Holiday Powers of the Three-Day Weekend level, they are Federal-type Holidays, so no U.S. Mail or Government or picking up garbage, they are both near warm weather (OK, sometimes Memorial Day is a crapshoot, Weatherwise), and they are both Patriotical, but in different ways; Memorial Day being the memorializing of People Who Died in Military Service, and Labor Day is a Day of Rest for people who Labor. Wowee, that is really a kinda Ararcho-Commie-Pinko-type idea if you think about it, can you imagine somebody trying to get Labor Day as a Federal-Powered Holiday now?
Right now there's harps playing and the edges of your viewing device are getting all wavy and shimmering . . .

PRO LABOR-DAY NO-LABOR: . . . yeah, it'll be a Day of Rest for all those Laboring Masses, you know, The Workers.

ANTI LABOR-DAY NO-LABOR: Are you out of your fucking mind? Tell those goddamn Laborers to get back to it or they will soon discover Every Day Is A Holiday, with no fucking pay. Next thing you will be telling me is they Control The Means of Production.

PRO: Huh? Why are you Scrooge-Grinch-Harshing all over this great idea for a National Holiday? This country was built on the backs of countless Laborers, man. And Slaves. Anyway, this will be an opportunity for the entire Nation to celebrate the organizations formed to do stuff like protect the rights of workers who could barely speak English and also to make sure there are no more Triangle Shirtwaist Factory Fires and shit. We'd still have Child Labor if it weren’t for the whole idea of being nice to Laborers!

ANTI: OK, look, man, the kids can have the day off.

PRO: No, man, kids don't work in factories anymore, that's the whole point, kids are supposed to go to school, and hey, you'll like this; that way there's more jobs for the adults! Also, a lotta kids are still on their Summer Vacation.

ANTI: From what? I thought you said they couldn't work in the shirt factory? Hey, waitaminnit—they don't even hardly make shirts in the U.S. anymore, what the fuck are you talking about with this "shirt factory fire" bullshit? You want all the goddamn textile workers in China and Bangladesh and Montserrat and wherever to have the fucking day off too? Who the fuck are you, the President of the New World Order?

Sorry about that. Anyway, I believe Labor Day is like, kind of a Radical Holiday, man, Revolutionary, but it is almost utterly without meaning since it's now one of those Monday Holidays, engineered so that people who get Labor Day off also have a good chance of getting three days in a row off, with a short work week to follow. And all the other poor saps? The ones who work at places like Macy's, Old Navy, IKEA, REI, K-Mart, Sears, and all the fast-food places? No Labor Day rest for them, man, they all gotta work, because all these fucking Retail joints are open for Labor Day sales, and people gotta eat some food while they are at The Mall getting their Labor Day Bargains on, man, so then the people running the restaurants all stay open, except for the fucking Chick-Fil-A if it's a Sunday, because they are Owned by Religious types or something, I think, and they are all about having them a Lord's Day off, which I fucking respect the Hell out of. I don't care What they fucking worship, seriously, Respect to the fuckin' Chick-Fil-A for that, man, one goddamn consistent day off for ERRBODY in the Chick-Fil-A business, and also, that is a delicious Chicken sandwich they make, man, I mean, have you seen how many fucking other Fast Foods are pimping their own Chick-Fil-A-stylee senguiche? It's like Wendy’s, McDonald’s, even Kentucky Fried, man, they are all screaming in they ads about their "Southern Style" Chicken Sandwich or whatever, with the pickles on it. Apparently that is what makes it Southern Style? Chick-Fil-A is beating these motherfuckers six days a week on the Chicken Sandwich, and they all just woke up and realized "Hey, when fucking Chick-Fil-A is closed, there's a million peckish fatasses out there at Old Navy who want that goddamn fried-Chicken avec pickle sandwich! What the hell are we waiting for?" However, nobody cloned the Chick-Fil-A waffle-style fries yet.

Anyway, fuck all these places that make people Labor on Labor Day, and Respect to Chick-Fil-A for being closed on Sunday, but I didn't check to see if they were open on Labor Day, so fuck them if they were. But that is a tasty sandwich, and in the Memorial Day vs. Labor Day match, I dunno what I was thinking: Gotta give the edge to Labor for the Jerry Lewis Telethon.