But what more can she do? 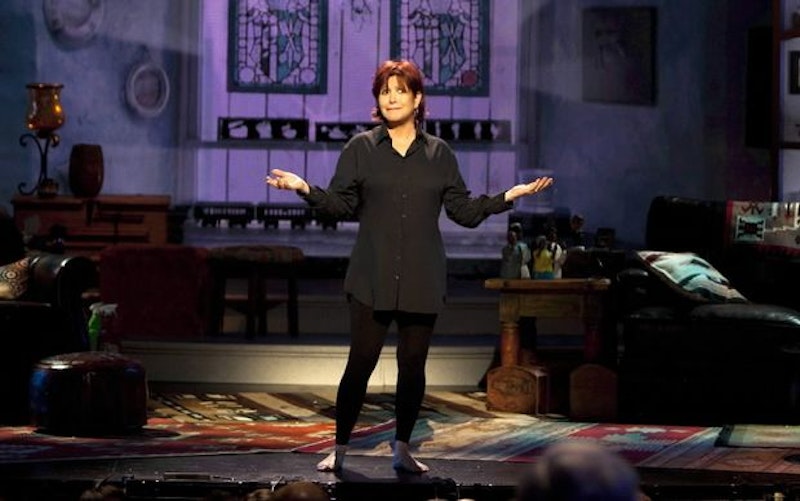 I saw Carrie Fisher’s one-woman show, Wishful Drinking, on HBO the other night. You know, it wasn’t that good. Fisher was so funny in her guest spots on 30 Rock and Weeds, but it turns out she uses pretty much the same delivery for all her lines. I would describe it as a husky bleat, effective for snatches of comic dialogue, ineffective for extended monologue, and by “ineffective” I mean irritating. After 40 minutes or so you want her to shut up. But she doesn’t, not for another hour.

Fisher, to coin a phrase, was always supposed to be smarter than she was supposed to be. She was a starlet, but a starlet who gave smartmouth interviews and wrote a pretty good novel. Now she’s too old for her gold bikini, and it turns out her smartness is adequate instead of abundant. You have to scrape Wishful Drinking for the good bits. I found three.

1) A nice line. Fisher says she and her old lover, Paul Simon, shared “the secret handshake of a shared sensibility.” When writing teachers talk about “Kill your darlings,” I guess they mean lines like that, since it is rather dear. But I’m glad Fisher is an ex-movie star and not a writing school grad, and that therefore she let her little chick live. It dresses up the proceedings.

2) A clever bit. Fisher recaps her family’s marital past with an audience challenge—take a blackboard covered by photographs of all the notables who have crossed romantic paths with her parents and herself, and all the notables and demi-notables descended from these notables, and then figure out whether Mike Todd’s grandson and another Hollywood sprig can get married without committing incest.

3) An anecdote. Fisher reveals that her father, Eddie Fisher, gets so high that he once ate his hearing aids because they were in a pillbox. Not bad! She drops some references to the anxious, self-regarding vainglory of her mother, Debbie Reynolds, but the references don’t tell you all that much. It’s not that sort of show. It’s an “evening with”: some anecdotes, some nudge-nudge, and that’s about it. You’re in the presence, and if the presence doesn’t add up to a whole lot, the audience can still put out for a standing ovation at the end.

I suppose Princess Leia, the daughter of Debbie Reynolds and Eddie Fisher, the ex-lover of Paul Simon, the author of Postcards from the Edge, and the lady who was so good as the old comedy writer on 30 Rock all deserve that much. Carrie Fisher has made the switch from feisty starlet to game old broad. But there we must leave her. There’s nothing more for her to do, and she doesn’t have much to do it with.