There are more male feminists than most of us realize, and they're crucial for the women's movement. From The Daily Princetonian. 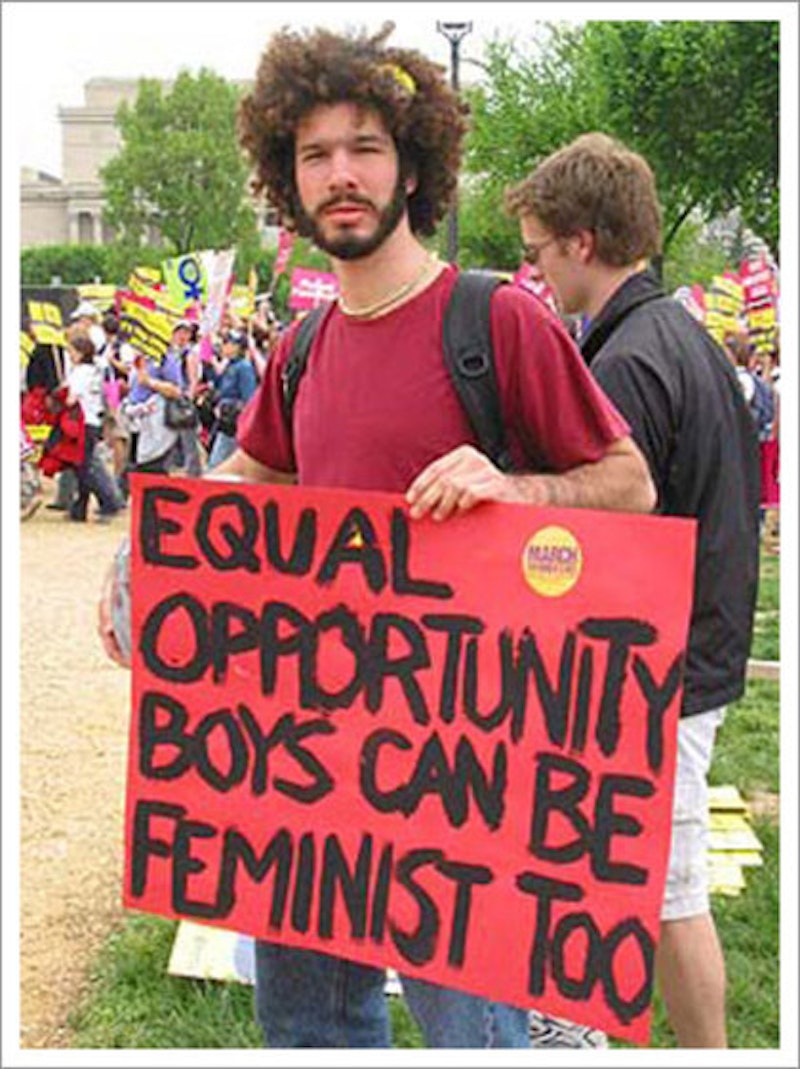 In the days after my last column, "How to be a feminist without anyone knowing" appeared, I experienced dozens of pleasant surprises: I had no idea that Princeton was teeming with feminists, some of them keeping their feminism secret and some of them boldly using the f-word. I was so proud of you, ladies. But then I received several rather testy e-mails from men who felt left out of my abridged guide to feminism, which, I admit, was mostly aimed at Princeton women. "Can't men be feminists too?" they asked. "Why are you only writing about what women can do to be feminists? What about us?" And boy, was I proud of those boys.

You may be surprised to hear that men can be feminists too. I apologize if I didn't make that clear in my first column, but I did only have 800 words for a manifesto, guys. As I sat rereading my words the night before the paper came out, I was terrified at how my fellow female students might receive it. I admit that I barely paused to consider how the guys might react. I'm sorry if you felt left out of my column, boys. The good news is, you don't need to feel left out of feminism.

Let's get this straight: Men can be feminists too. It's rare to find a man who identifies as one - it's not exactly something you hear guys slip into conversations about March Madness or Catherine Zeta-Jones. But I have a sneaking suspicion that there are a few more of you out there beyond the men who e-mailed me, secret male feminists who, like the women of Princeton, will surprise me with your willingness to at least start thinking like feminists, if not to openly identify as such.

Here are my conditions. Think hard about the women you're watching. Then think about the real women in your life - your mother, sisters and friends (perhaps not in the same context) - and realize, as you might have already, that there's almost no resemblance between what you see on the screen and what you see in real life. Learn to recognize an airbrushed photo when you see one. Realize that makeup works miracles and that tans - not to mention breasts - can be faked.

The second step is not to let the fakes affect the expectations you have of the wonderful real women in your life. Don't be disappointed when the girls around you don't look like Jessica Alba. Like you, we all have "flaws" that prevent us from duplicating what we see on the screen. Like you, we aren't airbrushed to within an inch of our lives. Like you, we expect that the people we associate with will be smart enough to value us for our minds rather than for our bodies.

The real women of Princeton - the freckled, wrinkled, wonderful women - demand real men. Men of Princeton: Your response to my last column gave me enormous hope. My hope is that you're man enough to be feminists.