An Afternoon in Auschwitz

Can the world's most famous death camp teach us anything but horror and despair? 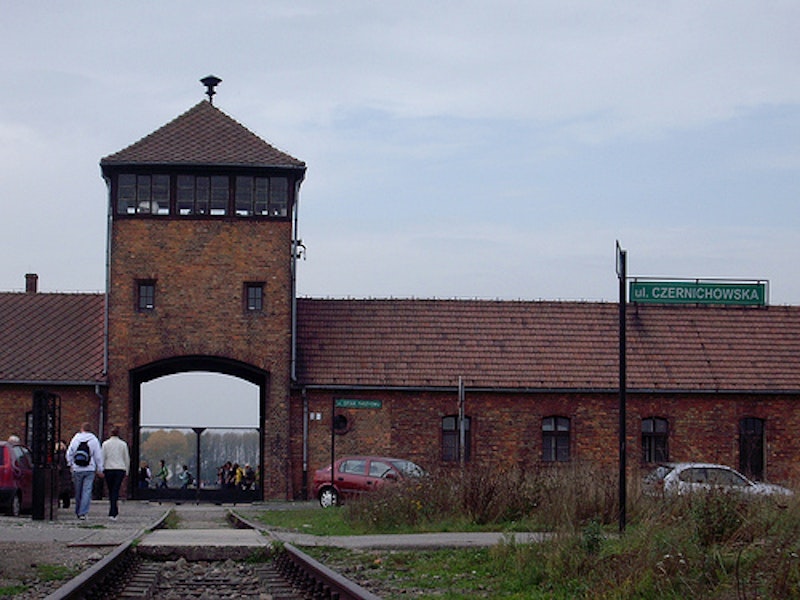 I have been not looking forward to going to Auschwitz for about a month and a half. Lesser holocaust shrines—the Anne Frank House in Amsterdam, the remnants of the Jewish Ghetto In Warsaw—were enough to send my mindset into a distinctly downward spiral. It took me a half day of pretty serious marijuana use to clear my mind of the former, sitting in a coffee shop and lighting pre-rolled joints until the thought of a the world's most famous adolescent steamed out of my head. Somehow I guessed Auschwitz would require a more potent remedy to dilute its distilled misery—morphine perhaps, or heroin, and last time I checked Poland hadn't legalized china white.

But it's nearly a moral obligation to visit the camp when you're here, and so on the second day of Rosh Hashanah, 2 Tishrei, 5770 (September 20th 2009 for my uncircumcised brethren) I made the pilgrimage to the house of the dead.
Aushwitz is a major tourist attraction, one of Poland's premier travel destinations. On every corner in the old city of Krakow you can find a tout offering a guided tour of the camp, the service listed at a reasonable 90 złoty, discounted if you buy it as part of a package with the Salt Mines and Wawel caste. Some of the more trendy agencies addend this usual menu with paintball and go-karting excursions. I'm not big on tours, so I grabbed one of the frequent busses leaving from the main station and found myself an hour and a half later in the town of Oświęcim, standing in the massive, stadium-style parking lot which abuts the camp.

As befits a historical site of its magnitude, Auschwitz is well run, particularly by Eastern European standards. Though it lacks the safety rails and ubiquitous security presence which unfortunately have become the standard in our child-proofed, Disneyfied society, the staff are multi-lingual and friendly, and the place is well-signed. Although technically free, to visit the camps between the hours of 10 and 3 one must be accompanied by a tour guide, a privilege which costs about 10 dollars American, a fee which I somewhat begrudgingly ponied up. All visits to Auschwitz begin with a short documentary detailing the camp's liberation by the Red Army. Filing into the small auditorium I found myself almost immediately overcome by an irrational but intense dislike of my fellow patrons. Every habitual gesture, every inadvertent cough and body tic seemed an unforgivable violation of etiquette, a distraction from the pure despair I instinctively felt was required by every visitor to this awful shrine. To my right a pair of Croatians watched clips of the Eurocup on their phones. I saw a blonde woman and her husband who had, inexplicably, brought their newborn baby with them to the death camp.

The film was filled with black and white footage of emaciated prisoners and open trenches filled with rotting corpses, their bodies formed into one indistinguishable coagulation of human flesh. Like much of one's time at Auschwitz it is terrible without being edifying. I have seen these images, or ones very similar, many times. We all have. But even knowing what you're in for, still the mind shutters and the stomach rebels. The baby, though much too young to have any cognizance of what is taking place on screen, began to weep uncontrollably, perhaps sensitive to the mood of the audience. After what seemed like an inappropriately long time to allow a child to scream in a cinema, the mother took her into the lobby.

After the movie ended, the doors to the outside opened and we filed into the pleasant late-September sunlight. Ignoring the clearly posted notices, a full third of our party began to light up cigarettes. My distaste over such a clear breach of our social covenant notwithstanding, I desperately wanted a cigarette myself, maybe three or five or 10. A young Aryan woman gathered us together and, in a quiet, reserved tone, guided us into the camp. We headed through the famous gates, evil wrought in iron, 'Arbeit Macht Frei.' The horrors of the scene contrasts with the banal mannerisms common to tour guides across the world: ''On your right you will see the dark scar of nihilism universal to the human soul, on the right compelling evidence that there is no god.'' I decide to eat the 33 złoty and take the first chance offered to detach myself from the tour.

Auschwitz looks much the way it did during the time it was in use, which is to say that it's mostly featureless brick buildings and paths of gravel. When the Soviets were on their doorstep the Nazis destroyed the most heinous remnants of their evil, but these too have been rebuilt with painstaking accuracy. The bunkers where the prisoners were housed have been turned into exhibitions detailing specific aspects of the shoah: hygiene and living conditions, the fate of the Hungarian Jewry, the attempts at armed resistance by the subject peoples. For one reason or another the crowds mostly skip these, so they offer an opportunity for solitude which is, if no less uncomfortable than experiencing the camp as part of a mass of tourists, at least seems somehow more appropriate. Walking through these, one finds oneself becoming numb to the sheer weight of evil, numbers and peculiarities piling up thoughtlessly. ''Only 20,000 dead gypsies—not so many, really,'' you begin to think.

The one advantage, I think, of a heading through Auschwitz with a tour group is it clearly demarks the amount of time one must offer to the dead. Absent this metric I found myself wandering rather aimlessly, violating the proscribed routes and pathways. ''Will one more exhibit assuage my guilt?'' I thought. In one of the bunkers I came across a pair of pictures depicting before and after shots of one of the camp's many victims, a Hungarian Jewess. On the left she is a pretty, dark-haired semite, smiling with her husband and child in front on an in-ground pool, the very picture of suburban contentment. On the left she appears again, horrifically emaciated, held up to the camera by a pair of doctors, naked to display for posterity the full-range of her sufferings, ribs clear against taught skin, breasts rotted to the naval, wild tufts of pubic hair spouting out grotesquely.

This was my breaking point. I choked back bile and headed for the exit at something just south of a dead sprint.

Sitting on a bench in the parking lot, waiting for my return bus to Krakow, I reconstructed the day's events and wondered at the purpose of my visit. ''Never Forget'' is the old mantra, but memory is passive, and I distrust it as I do any strong emotion which has no corresponding potential for action. ''Never Again'' is another popular refrain, and one which has no more weight; ''Thou Shalt Not Commit Industrialized Genocide'' is an easy enough command for most of us to follow. But if the political, social and economic conditions which gave birth to the holocaust have not repeated themselves, the Congo, Darfur and Rwanda—names which hold only slightly less resonance than Auschwitz, Birkenau and Treblinka—ought to be enough to give pause to any optimist convinced of humans' ethical development.

The Red Army documentary, produced before Nuremburg and the development of postwar Europe, ends with an open question: will the perpetrators of these crimes be brought to justice? Even if one was not aware that, of the 8000 guards who served grim duty at the camp, 7000 were never prosecuted in any court of law, one would already know the answer. The cruel fact is that it is relatively easy to commit atrocities beyond the capacity of human ability to heal or avenge. Perhaps in the end we can offer nothing more to the victims of Auschwitz than memory, a few hours on an Autumn afternoon, and the appreciation of just how inadequate an offering that is.