Not everybody's cut out for the modelling industry, and women should stop searching for such easily objective measures of beauty. 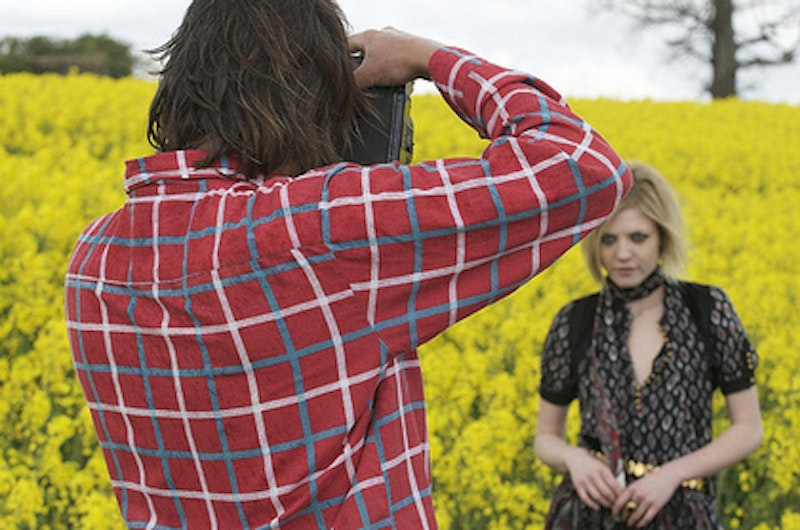 In life, we're always encouraged to plan for the future, to strategize and network and do everything possible to create opportunities for ourselves. But there's something to be said for chance: being in the right place at the right time with—as was the case for my friend Kira last Sunday—the right genes.

Kira and I met for brunch, squeezing ourselves around a tiny table on the charming but crowded terrace of a café in the East Village. One of the first things we noticed about a couple that soon sat down next to us, drawing our attention away from the delicious eggs Benedict just served, was their adorable dog. The dog had eyes only for the steady stream of passersby in the street, but as soon as they got settled, his owners noticed us. Or rather, they noticed Kira.

Kira is striking in the true meaning of the word. Her beauty is so unusual that for the first few minutes of looking at her, you don't quite know what to make of it. Everything about her is big: huge turquoise eyes, the thick dark hair and eyelashes and her long, slender limbs which, combined with a loud, Southern twang and explosive laugh, give her a presence that just refuses to be ignored.

Halfway through the meal, I interrupted our conversation about bee stings, Ultimate Frisbee and male strippers (don't ask) to use the bathroom and when I returned, the woman at the table next us was passing Kira a business card. It turned out that she was a casting agent, and wanted to put Kira in touch with some of the modeling agents she knew. Not surprisingly given her beauty, Kira has some modeling experience, and she accepted the woman's business card. The woman gave me a polite smile as Kira introduced us, and then she turned back to her meal.

Far be it from me to suggest that I'm modeling material. My mother and grandmothers passed me down many things—the uncanny ability to always find a parking spot, for example—but a model's physique was not one of them. There are many professions, besides modeling, that my size and shape will prevent me from entering—cage-fighting and the priesthood, to name just two. I'm pretty enough, and I'm quite happy with my body, but like the vast majority of people, my future has never been in modeling; I thank god every day that my earning power lies in my brains and not in my body. But sitting at that table on Sunday morning, I felt invisible in the eyes of that casting agent. And then I felt something worse than invisibility: I didn't feel beautiful at all.

There are two kinds of women in this world. There are beautiful women: the ones with captivating smiles, lovely freckles, or skin that glows—the kind of everyday beauty you see on the subway in the morning or during a meeting at work. Then there are the Beautiful Women, the ones who have been capitalized, labeled and declared objectively beautiful by the status of "actress" or "model." They are the ones deemed attractive enough to have their faces and bodies photographed and projected on screens and billboards, the ones held up as an example to the rest of us.

In her book Perfect Girls, Starving Daughters, feminist author Courtney Martin writes that being chosen as a model is something young women crave because it is objective, tangible proof that they measure up to the impossible beauty standards to which women are held today, standards which lovely freckles or glowing skin alone can't meet. Kira had been declared objectively Beautiful, and I had not. I would have to be content with being just beautiful, the kind of beautiful that is subjective, the kind that is “in the eye of the beholder,” but that isn't Beautiful enough to be on a billboard.

The sensible and self-confident woman I strive to be was telling me to think nothing of it, but the irrational and deeply imperfect teenage girl I still partly am was disappointed. The feminist inside me ranted and raged even louder than usual about impossible standards of beauty, airbrushing, eating disorders and perfectionism. But no amount of ranting could change the fact that my exclusion from the world of Beautiful Women made me feel inferior. How heartbreaking, I thought, that no matter how intelligent, ambitious or accomplished a young woman may be, she can still question her own value and worth when she fails to gain entry into that Beautiful world.

It is true that women are taught to hold themselves to nearly impossibly high standards of physical beauty, standards that only a fraction of the female population can achieve (and even for those lucky few, makeup, lighting and Photoshop play parts well). But more importantly, women are taught to place physical beauty above all other attributes, such that being labeled a Beautiful Woman trumps being an eloquent woman, a funny woman or a kind woman. This isn't really the case for men, who are not constantly bombarded with the message that, unless they fit into a very narrow definition of beauty, they have little or no chance of being truly attractive.

When men aren't genetically blessed, most of them deal with it and move on; when they realize, perhaps after some denial or delusion, that they have not been blessed in the same ways as Tom Brady or Brad Pitt, they accept it, confident in the value of their own minds and souls in a way that many young women are not. Encouraged by the media to see themselves as more than just bodies and faces, most men find themselves no less valuable, or lovable or noticeable than they might otherwise do had they been genetically blessed with beauty. I would encourage young women to take a cue from those admirable men, and to remember that regardless of whether they qualify as Beautiful, their real value lies in their hearts, their souls and their minds.