Witness to the Asian Century

A five-month internship in New Delhi offers a firsthand look at the fastest-growing continent on earth. 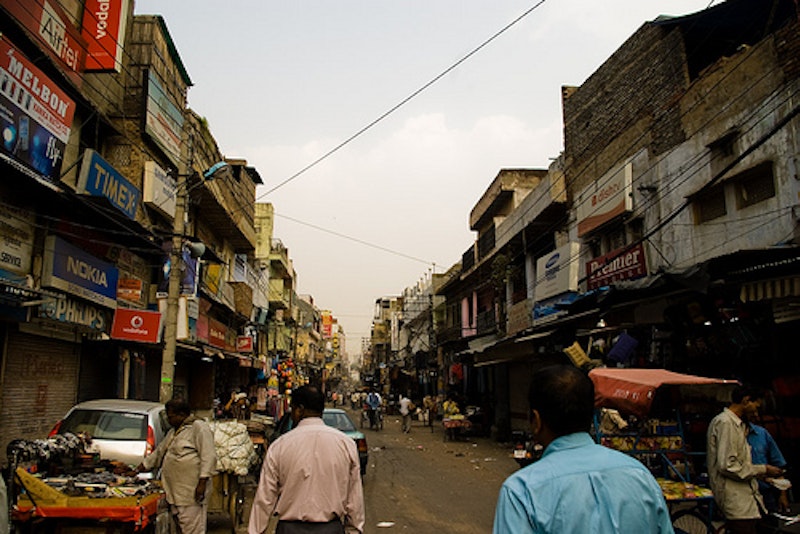 NEW DELHI, INDIA - He told me what he did and handed me his business card. I nodded, glanced at it, and turned back to the ongoing cricket match. Cricket being what it is—baseball without the fun or excitement, no matter how hard I try to get into it—I looked back at him. "Wait, how old are you?" He didn't understand, possibly a gap in his English or maybe my accent coming between us. I pointed to myself, "Uh, well, I'm 23," then to him, "You?"

"Oh, oh," he said. "I'm 22." Incredible, I thought, 22 years old. Are we doomed? Are Americans stuck in neutral while the Asian century renders us obsolete? I've been living in New Delhi for a little over two weeks now, here for a five-month internship at a nonprofit organization. I've been able to witness the dawn of the Asian century.

The 22-year-old had his own boutique garment factory, making women's Indian-style tops sold in markets around Delhi. He oversaw 30 machines and 35 employees. He was hired, out of high school, by a large clothes-manufacturing company, one that he said worked with local clients and foreign giants like American Eagle and Guess. After a few years, he got his own factory together, just like that. Far from the nepotism that India is notorious for, his story is true-blue American Dream. His father was, and is, a farmer, growing sugarcane and wheat in a village an hour north of the city. He owns his own factory. He is 22 years old.

When put into words, India is a country that makes no sense. This is a place where your family name really matters. Everyone asks for last names. There is an acute awareness of ethnic and familial history. I wouldn't say that things like caste, religion, and home state determine your lot in life, but people are very aware of these things. Virtually everyone I've spoken to has mentioned ethnicity in some format. It's usually harmless, just-letting-me-know type comments like "Yeah, he's a Punjabi" or "He's from the South" without any additional context. They just want to make sure I know where everyone is from.

Yet, people are fiercely proud of this diversity of which they're so aware. I forget what a minority I am as a white person because everyone looks so different. One of my friends is Manipuri, from the state that borders Myanmar, and he looks more Thai than stereotypically Indian. Another is from Kashmir, who looks Afghan or maybe Persian. My part of town, South Delhi, is so naturally diverse (including a small expatriate population) that people don't even give me a second look, despite the fact that I don't look like 99 percent of the people around me.

There is poverty here unlike anything I've ever seen. Before I left, most people I spoke to warned me about it. They just told me to be prepared. I have seen mutilated children and hauntingly visible malnutrition. Wherever there is construction—and there is an insane amount of construction—there are the ubiquitous tents, tin shacks, and people huddled around small fires. Even in my posh neighborhood, there are a few unfinished homes swathed in tents and cloth, sunken eyes staring back at you. I want to gloss over it sometimes because it's the narrative I hear most often and the most visible one in the news and pop culture. It's also only a part of life here but to avoid addressing it would be dishonest.

And, yet, I live in a beautiful gated apartment building, paying a rent comparable to a desirable neighborhood in a mid-size American city (though that's with the "I'm a Foreigner" tax that probably adds 20 percent). Universal goods like cell phones, transportation, and food are cheap, but anything targeted at the middle class or above has western prices. Brand name shampoo costs about the same here as it does in America. Drinks at the fancy clubs are priced at New York City levels. That's because the purchasing power of the middle class isn't nearly as far behind the West as you might think given the surrounding poverty.

This creates a wild income disparity that has some bizarre results. Every nice building and home comes with its own security guards. Every building in my neighborhood, Defence Colony, sits behind an imposing front gate. Everyone has servants and drivers. A friend of mine here is solidly upper-middle class—by no means a rich man—and has two full-time servants and a driver. My landlord has his own servants. Even I have a servant (sort of)! I have a maid who comes every day, sweeps and mops my floors, does my dishes, does my laundry, and changes my sheets and towels once a week. It costs me less than it did to do my laundry each month in Ann Arbor, Michigan.

It's weird dealing with the dearth of garbage cans and the subsequent presence of trash everywhere. The roads aren't great. The sidewalks don't exist and if they do, are occupied by parked cars, vendors, or, most likely, trash. Everyone walks on the side of the street, even along major highways (including me). There are people in every nook, crowding the streets, markets, highways, construction sites, everywhere. Things take forever and you don't know why. To buy a cell phone SIM card, I needed photocopies of my passport and travel visa, passport-sized photos, I had to fill out three pages of forms (including giving my father's name and occupation), I had to sign every sheet of paper (including the photocopies), and it took 30 minutes of calling and number punching to activate the phone. I watched someone rent an apartment for two months by handing over $2400. Foreign cash up front, no forms, no time... apartment.

However, after a few days, you get over this. And that's when you realize that there is something strikingly familiar about this place. The things that always bug me about visiting other countries—overpriced and inaccessible food, anti-American sentiment—don't exist here. It's the only place outside the United States and Canada that I've ever gotten good service at a restaurant.

People are legitimately interested in me—not as foreign novelty, since most people know Americans through friends or family—but because they care about me feeling welcome. People ask about my family all the time. People ask me probing questions about my background, where I'm staying, how I like India, and my family history. I've had intense discussions about gender relations, the quarter-life crisis of the post-college years, the problems of India, the problems of America, and democracy. People want to talk about democracy and politics and religion and identity. Strangers! People won't let you pay because you're seen as a guest in the country. Everyone is shaking with excitement about the direction in which their country is going. The optimism shines. People are proud of what's happened so far. But no one is blind. I've had conversations about roadblocks in Indian development and everyone has an idea of what to do.

I feel at home here. It's a country that makes sense. The borders are unclear and disputed, there's a Maoist insurrection going on a few states over, and when I flew here, our plane passed through Afghanistan's airspace. This is a world away. But it feels so close. I don't know if we're doomed or not, but what's going on here is amazing.