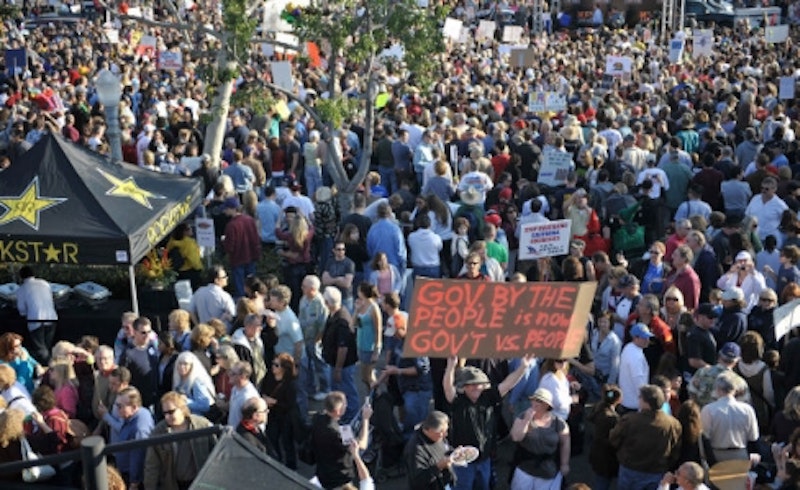 Maryland has two Republican candidates for governor who’re trying to make business the centerpiece of their campaigns: one who wants to organize small businesses into a lobbying force, the other in favor of running government like a business.

The first is former Gov. Robert L. Ehrlich Jr., who ought to know better; the second part is Brian Murphy, who can be forgiven for his youthful exuberance and naïveté. In both cases, though, this is Republican orthodoxy in full flower.

Murphy, 33, said in his formal announcement, “We deserve a governor who’s been in the private sector and knows how to run a business.” So it is fair to ask, since Murphy has an MBA, what his business model will be—Goldman Sachs? AIG? Enron? Or maybe Bernie Madoff’s Ponzi scheme?

Ehrlich, too, has been blowing some smoke of his own. He’s trying to rally small business owners to champion his cause for a restoration governorship by stoking up the usual anxieties about burdensome taxes. And here is where Ehrlich gets downright weird because he’s been down this road before. He’s promising to repeal the penny sales tax increase that was enacted by Gov. Martin O’Malley (D) without explaining how he’d replace the $600 million in lost revenue. Maybe his wife Kendall will hold a bake sale.

Ehrlich’s in a tough spot. He has a paper trail. He berates O’Malley as a tax-and-spend liberal, but as governor, Ehrlich’s overall budget increase was 33 percent over four years while O’Malley’s has grown only three percent. Ehrlich increased tolls, taxes and fees by $3.3 billion, including the state’s share of the property tax. Just last week, the Board of Public Works held the property tax rate at the same level as it has been for the past four years.

To begin with, when Republicans talk about running government like a business they usually mean privatizing services. There’s a major problem with that, though: If they mess up, private businesses cannot be voted out of office as elected officials can. And more to the point, government is not designed to make a profit, as is business, but is intended to provide goods and services in return for the tax dollars it receives. Ideally, government should be a zero sum enterprise.

Both of the Republican candidates’ positions are awkward. They come at a time when there finally may be a genuine act of bipartisanship in Washington as both parties appear ready to join in legislation to curb the excesses of Wall Street and its casino mentality of greed. Among the few remaining products that America manufactures these days are unregulated derivatives and default swaps, the major cause of the economic collapse and the underlying goal of regulatory reform.

With an unusual bit of symmetry for political competitors, both Murphy and Ehrlich are either misreading or reading too much into the selective populism of the moment. In fact, the noisemakers on the streets are as angry at business as they are at government. Besides, pandering to business won’t work as a campaign theme in a state like Maryland where 26 percent of the workforce is employed by some level of government, 33 percent of the population is black and there are 450,000 union members—all of whom rely on government, for one reason or another, for sustenance and support.

The Tea Party energy is the kind of anger that swells up in times of economic distress when jobs disappear, income shrinks and pensions and 401(k)s are kaput. This time around, however, brings with it a massive transfer of wealth to a handful of giant institutions which is choking off the flow of capital through the nation’s economy. According to reports, the four biggest banks control 66 percent of the nation’s wealth. Yet the Tea Party drones have been strangely silent on the proposed reforms, such as they are, to re-regulate the abuses of the banking and financial industry.

Besides, many of the older, middle-class white folks who appear to make up the Teabagger constituency seem to be downright confused over where government and business blur the lines. The latest Pew Research poll reveals that eight of 10 people surveyed say they don’t trust government. A similar New York Times/CBS poll showed a pattern of inherent contradictions among voters: 70 percent said they distrust government and that government is spending the country into a ditch. Yet the same group said they support Medicare, Medicaid, Social Security and defense spending, which combined make up 76 percent of the total federal budget. Another 10 percent of the budget goes for interest on the national debt and the remaining 14 percent underwrites all of the other federal programs. There you have it in a statistical nutshell: The Teabaggers oppose government spending except where they support government spending.

In fact, the findings of the New York Times/CBS poll now indicate that much of the Teabagger agitation has more to do with race than with any single policy. Tea Party concern over racial issues far outweighed that of traditional Republicans, a factoid that both Murphy and Ehrlich ought to consider before trying to tap into Tea Party sentiment. In most polls, about 20 percent of those surveyed have said they dislike President Barack Obama because he is black. Among Tea Partiers interviewed for the NYT/CBS poll, 52 percent said they disliked Obama, almost three times the national average.

So to refine the point, Tea Partiers tend to favor polices that favor well-off white people—pretty much like themselves: flush-faced Kiwanians from Kansas and raucous Rotarians from across the fruited plain. And it’s becoming more and more obvious that they’re being manipulated by a professional class of politicians and political organizers such as former House Majority Leader Richard Armey, as well as organizations such as Americans for Prosperity and Freedom Works. The entire Tea Party movement is becoming so suspect that even the Republican party can’t decide whether to join them or ignore them. There was a time a few decades ago when such gatherings were referred to as “little old ladies in tennis shoes.”

It’s too early in the campaign for such woeful misjudgments as Murphy and Ehrlich have displayed. Tea Party anger and hell-raising on the streets can dissipate as quickly as it energized once the economy begins to show signs of correcting itself as it is, for example, with record home sales and the stock market surging (which is a measure of confidence.)

Murphy, a Democrat until five years ago, is a former portfolio manager for Constellation Energy, a company that almost went belly-up a few months ago until a French company bailed it out. Is that another of Murphy’s business models on which to pattern the governance of the state? Murphy has said he has no partisan misgivings as he gently flips the bird to both O’Malley and Ehrlich. He calls the last eight years a “total disaster.”

And for Ehrlich, the message so far has been definitely muddled and muted. Wanting the governorship back is not reason enough to win it back. And the baloney about repealing the penny increase in the sales tax is equally a lot of campaign hot air. Even if he were to win, Ehrlich would still be facing the same Democratic General Assembly that not only enacted the tax but the one he tangled with for four nasty and contentious years. There were many complaints when the tax was enacted, but it’s a strong bet that the tax won’t even gain traction as an issue in this year’s campaign. Think where we’d be without it.