Wait, I Thought Obama Was An Elitist Nerd?

If campaigns are all about identity politics, yet we misjudge the candidates' identities anyway, then what's the point of a two-year election in the first place? 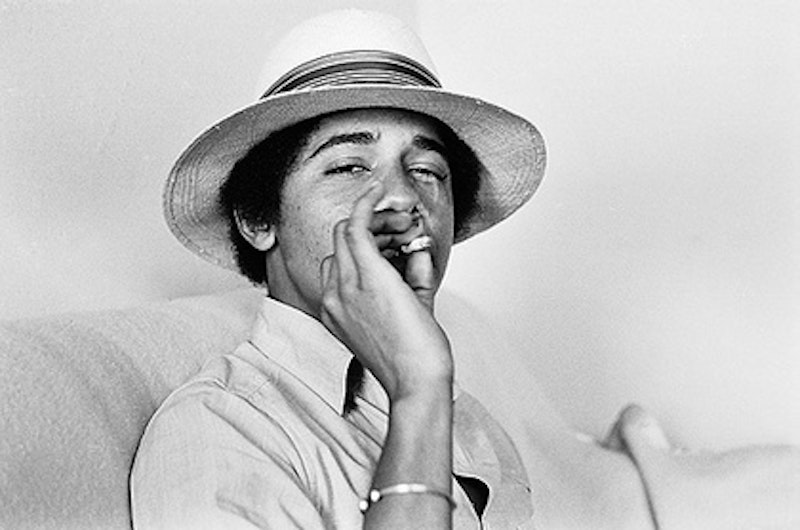 I’m not really sure whom to blame here, but something is amiss. It could be the fault of sleazy politicians, incompetent/inaccurate journalists, the gullibility of the American electorate, blind luck, or more likely, an innate failing in the structural integrity of the American political system. There is no other way to explain the massive disconnect between the election-cycle and the presidential personas of the two most recent White House occupants.

In the two weeks since Barack Obama has become president, a particular type of trend story has been rolling out of the White House: Obama is a fun, chill dude. Wednesday’s Obama-is-a-regular-person expose in The New York Times received the headline “With Goodwill, and Cookies, Obama Courts Republicans.” You read that correctly: cookies. The body of the article reveals that Obama threw a cooler Super Bowl party than any I have ever been to—including a Nintendo Wii for kids—along with a Republican congressman saying of the President, “He seems like a guy you could have a lot of fun with.”

Wait… what? Really? Isn’t this the arugula-eating, ballerina-like-bowling, out-of-touch-with-the-common-hard-working-(read:white)-folks guy? Yet, he’s turning the White House social scene into an exciting, exclusive hangout spot, not so unlike another great American, Hugh Hefner, did with his Playboy Mansion.

When one of the first of these articles, about the new relaxed White House dress code, came out, I finally understood why so many people buy tabloids and read Perez Hilton. Grinning from ear to ear, I literally inched forward in my chair, leaned closer to my computer screen, and imagined myself in the suddenly-relatable world of the Obama White House. I get it now. To see someone you put up on a pedestal, who seems so super human, act, well, normal—it’s so, so… neat? That’s probably the best way to describe it. Neat. It’s sort of like hearing stories about your parents when they were your age. You think to yourself, “Weird, my parents are people just like me.”

But there’s Barack, wandering around the West Wing like a restless go-getter, popping in unannounced to offices, cracking jokes with subordinates, eating cheeseburgers for lunch. This the same character who looked so uncomfortable and out of place in diners around the country.

Then we saw that Slate article about having people over for drinks. Then you read about the complete absence of alcohol in Bush’s White House. The populist yokel figure concocted during election season seems quite at odds with the stern, hyper-business-like office that Bush ran. In the dress code article, we find out that the man who couldn’t pronounce “nuclear” once locked then-Secretary of State Colin Powell out of a meeting because Powell was three minutes late. He was a fussy, autocratic, shut-in leader obsessed with etiquette. This is so contrary to the Bush palling around with everyone, telling “Brownie” he was doing a “heckuva job” and making up silly nicknames.

One hopes time will grant us a clearer picture of the Bush White House, while transparency will sketch a rough outline of the Obama White House. What I really hope is that we figure out what happened, why the disparity and why the seeming contradiction. We had it all wrong both times when it came to who these people were behind the spotlights and prepared speeches. This should challenge the conventions of political journalism, as well as challenge the way we, as voters, interpret everyday politics. If, as cynics may be wont to say, the presidential election is really just a personality-based popularity contest, and we can’t even appropriately nail down their personality, then we must admit something is wrong. Bush ran as a bipartisan compassionate conservative who became one of the most partisan conservatives ever. Obama—running as a centrist—was decried as “the most liberal senator,” the truth seems to be leaning toward centrist, but of course there’s always time for that to change.

Election processes that take nearly two years, where candidates are under the spotlight 24 hours a day, pasts are constantly scrutinized, presents viciously dissected—and what do we really know? We need the media to be the bigger man, stop buying into pollster’s hype, stop trying to craft characters out of humans, and just tell us what these people are really like and what they’re really saying behind the scenes. As a population we need to ask more questions, look at the whole picture, and try to avoid getting caught up in all those bullshit storylines. Then maybe we won’t be surprised by our presidents anymore. I mean, EVERYONE knew Bill Clinton was always cheating… why didn’t we?