He made CNN hosts and New York Times opinion writers into sycophantic nationalists. 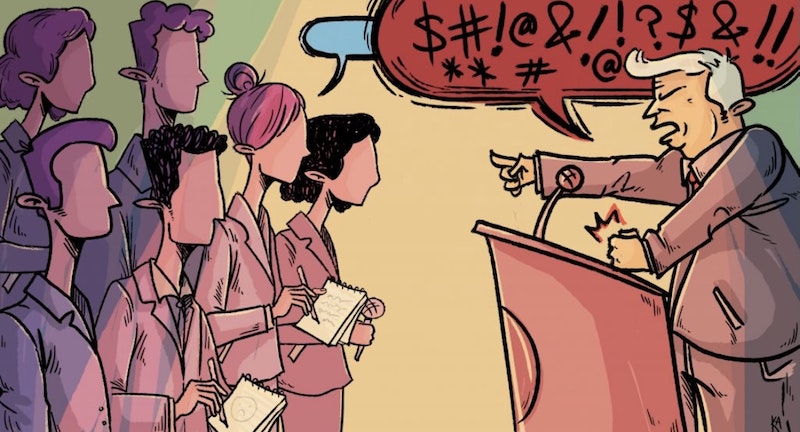 It's been evident since early Spring 2020 that the Centers for Disease Control pointedly, repeatedly, and thoroughly fucked up Covid testing for the whole country. As they did so, CNN and The New York Times were focused primarily on the way Donald Trump tweeted about testing; he didn't like it, because an increase in testing (of course) led to an increase in reported cases, which he thought reflected badly on him politically. And all through the period, the talking heads could hardly say "CDC" without adding, "the world's premiere public health authority" or "recognized around the world as the gold standard." They were outraged not only by Trump's usual stream of Tweets, but also by anyone who criticized the CDC whatsoever. People like that don't trust the science, they insisted ad nauseam plus, and now our shared reality itself was breaking down, or some such guff.

As CNN awaited the next Tweet, it missed the story (and I do thank The Washington Post for telling it thoroughly now). Many authoritative voices, from public health experts to Joe Biden, blamed every single COVID death on Trump, going with "blood on his hands," etc.: not exactly a medical diagnosis, doctor. They took it to be their job to enhance the credibility of whomever Trump might be attacking, and they endorsed whatever people like that said uncritically. This not only made them real chumps; it compromised their journalism.

Trump had this effect again and again. He made idiots of his opponents, who thought that anyone Trump attacked should be treated as a hero and there was no point in fact-checking their declarations. Rather, they took the approach of gasping and nodding along. Democrats and CNN cultivated a mixture of hatred and credulity that detached them from the truth, just as Trump is detached from the truth.

For a couple of years, CNN hosts (I am talking to you, Jim Sciutto) appeared in the guise of spokespersons for intel. The airwaves and op-ed pages were full of Jim Comeys and Andy McCabe, but also a hundred former CIA and FBI agents and executives. All the networks hired former federal prosecutors to make the case against Trump, gasping at their legal expertise and relentlessly praising the legal system. John Brennan and Michael Haden spoke with unexamined authority into an atmosphere of sycophancy. The intelligence and law enforcement services that Trump seemed intent on insulting (though hardly dismantling) were, it turned out, the envy of the world. Their information was, again, "the gold standard." People in or just out of intel leaked to CNN, the Times, and so on, and they believed it all: the Steele dossier, for example. They treated FISA warrants as tantamount to criminal convictions, for American intel would never request such a thing without substantial evidence of wrongdoing.

Now, if these news outlets have a job, it's to be skeptical of the American intelligence community, which has, since World War II, lobbed our nation into a series of wars, assassinations, and coups, engaged in torture and operated black site internment facilities all over the world, gained close to universal access to our communications, and constantly tried to sell the most ridiculous lies to the world. What's notable about many of these operations (the Gulf of Tonkin, the WMDs, the kill-Fidel project, NSA surveillance as revealed by Edward Snowden, and so on), is how bungled they’ve been, and how bumbling the lies with which they've been sold. But as soon as Trump said "deep state," these jerks could do no wrong. They’re now all that keeps Americans safe, which is now all that matters.

Trump, according to CNN, the Times , Biden, and typical liberal Trump opponents, tried to destroy the beautiful legacy of American foreign policy. For a century or more, they said, America has inspired the world. Wherever people seek freedom and basic human rights, they turn toward America as their model; wherever people are fighting for equality and democracy, they can count on the support of the USA. But then Trump came along. He almost took us out of NATO, maybe? He thought America could "go it alone." He lost our allies and courted our enemies.

America in the Trump era wasn’t the beacon of freedom it had been at My Lai, Abu Ghraib, Guantanamo; the beacon of freedom that riddled the corpses of Patrice Lumumba and Salvador Allende with bullets; that installed the Shah in Iran; that propped up right-wing dictators throughout the world during the Cold War. America under Trump, they asserted, hasn’t been the glowing symbol of equality that it was during the Jim Crow era or in our own era of mass racial incarceration brought to you by people like Biden and the Clintons.

I'd suggest considerable skepticism on it at all times. If you let them, these people will sell you anything and then use you to drive the world to war or wherever they happen to want to go this week. And they'll fuck up and conceal it forever, if your basic stance is that they're Science and authority and safety and it's your job to believe and peddle what they say, wherever that may lead.

Perhaps, in the Biden era, these people can return to doing some semblance of their jobs. It's unlikely that they'll have time or energy to focus, however, if Trump is still tweeting.