There's Nothing More to Learn From John Edwards 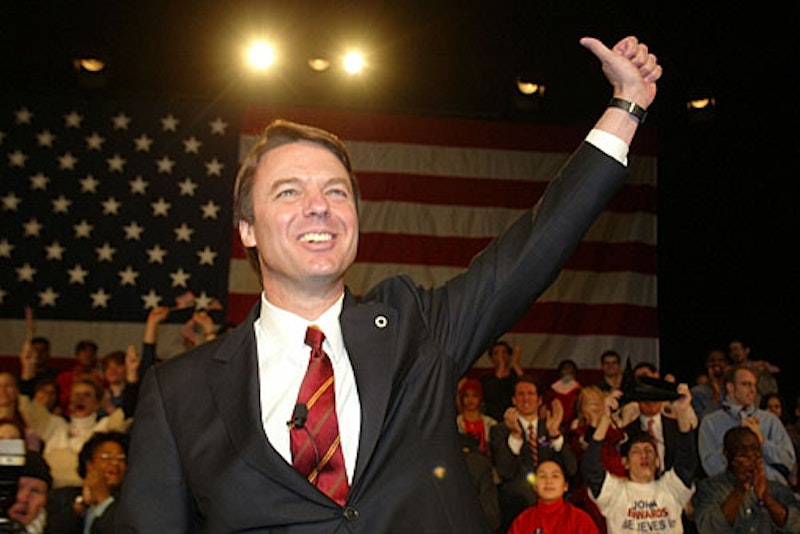 Sometimes, while reading Michael Wolff's 600-word "Off the Grid" columns found on his splashy website newser.com, I'm reminded of that hoary Madison Ave. cliché that went out of favor in the early 1960s: "Let's run it up the flagpole and see if anyone salutes it." This isn't necessarily a criticism, for as I've written about previously, Wolff is one of the most prolific, contentious and probing analysts of today's media, and if his batting average is .400, well, not even the Minnesota Twins' Joe Mauer is that good.

This past week Wolff was clearly in a slump: his columns about John Edwards and the much-bruited-about soda tax (he claimed the right wing will attempt to rally pissed-off "fatsos" who, unlike "Super groovy cool self-satisfied yuppie people" gulp soft drinks and will rebel against the proposed sin tax) read as if they were tossed off while he was on the john or in the back of a cab, thinking, "Jeez, deadlines really suck."

Let's focus on Friday's goofball scribbling, "Obama Is a Snooze-John Edwards is the Real Story." Wolff, for reasons known only to him, decided that at this late juncture in the John Edwards adultery/love child saga, it was time to present the two-time presidential candidate's fall from Beltway grace (which, unless you're a Republican, usually requires a Herculean effort) as a prime example of how screwed up the co-joined media and political permanent government really is.

He writes about the tawdry revelations about Edwards as if there's something to be learned. "This isn't just politics, it's literature. It's the great American novel, the kind that isn't written anymore... The John Edwards story, as it helplessly and haplessly unfolds and keeps unfolding, is a remarkable window, which we ought to look into with the greatest curiosity and awe." Sorry, Michael, but the travails of the Edwards family isn't Faulkner. It's just another celebrity scandal, one that most, except perhaps Matt Lauer, stopped following a long time ago. Sure, the hook that originally elevated it beyond a mere case of domestic ruin was that Elizabeth Edwards, her husband's key political strategist, not only has cancer, but while she was running his short-lived 2008 primary campaign, the wealthy populist candidate was enthusiastically unzipping his trousers for another woman.

Still, this is worthy of running commentary? Wolff's defense is that it demonstrates how "for reasons of heavy political correctness," the citizenry is missing out on a necessary primer about the underbelly of the political establishment. In truth, the fall of John Edwards had its run in the media; readers and viewers were either temporarily fascinated or not interested, and then moved on. Besides, by the time the rumors about Edwards that were circulating during his campaign were verified, the guy had already lost. There's no civic lesson here: the former North Carolina senator is just another pol who was reckless in his personal life and now his quest for power is over. End of story.

Actually, the most interesting part of Wolff's Friday entry was one of the comments it elicited, a better indicator of today's political/media culture than anything Edwards did. "Polstroad wrote: "If Ropert [sic] M had this article by MW in one of his shit sheets, Wolff would be ranting about the tawdry crap that Murdoch publishes. Frying pan/kettle etc." This person has zero understanding of Wolff's ongoing examination of the media, for it's doubtful he'd slash Murdoch for this kind of coverage. And "hadenough" also weighed in: "The Nation [not the magazine, one figures] crumbles and you fools focus on the slunts [sic]. Go figure... I'm unplugging Newser."

I'm uncertain whether or not to give these two intellectuals the benefit of the doubt and assume that their comments were texted to Newser, perhaps while driving in traffic. Nevertheless, if this kind of dashed-off garbage is typical of Internet grazers, that's a far more depressing lesson for the day than Wolff's half-baked column about the soon-to-be forgotten John Edwards.